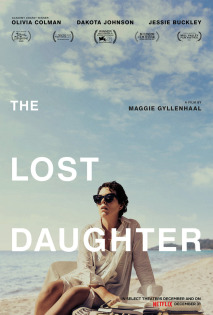 Maggie Gyllenhaal’s directorial debut, THE LOST DAUGHTER, for which she also adapted the screenplay, is exceptionally impressive. Of course, it doesn’t hurt to have the wildly talented Olivia Colman starring --- seriously, she can do no wrong --- but, as I’ve stated many times in the past, it’s all about the writing.

Based on the novel “The Lost Daughter” by Elena Ferrante, Gyllenhaal’s film takes place on a Greek island where Leda (Colman) has traveled for a bit of a respite from her academic duties as a professor of comparative literature. Though she has brought work with her, Leda spends most days at the beach.

It’s there where she becomes overly interested in a young mother, Nina (Dakota Johnson), and her beautiful toddler. These two are part of a large, rowdy family, whose presence near Leda disturbs her quiet reverie. She’s both annoyed and fascinated by their antics and watching Nina with her daughter brings up disturbing old memories for Leda.

Told via flashbacks, THE LOST DAUGHTER raises many questions about mothers --- and the women who take on that role, whether by choice or necessity. Leda has two grown daughters, but she was far from being the “perfect” mother when she was young.

At times cherishing motherhood and then feeling overwhelmed, youthful Leda (Jessie Buckley) does the unthinkable and leaves her family for her instructor of Italian literature, Professor Hardy (Peter Sarsgaard --- Gyllenhaal’s husband in real life). It’s a realistically painful scene, with her partner, Joe (Jack Farthing), and their two young daughters begging her not to go. There is no real judgment of Leda in Gyllenhaal’s script as we all must allow for other’s choices. But it is older Leda who is struggling with her past.

THE LOST DAUGHTER is so beautifully written and acted that I can even forgive Gyllenhaal for choosing Johnson to play Nina. Her acting ability has been less than stellar in the past, but as this spoiled, insecure young mother, she gives her best performance to date.

Sarsgaard is his usual accomplished self. At first Gyllenhaal worried about casting her husband to be the “object of desire” for a younger female, but realized he was perfect for the role --- and he is. He has that gentle persuasiveness about him that makes his portrayal ring true. Ed Harris and Paul Mescal have smaller roles as Leda’s friends on the island. Both are terrific in their efforts to watch out for her.

But THE LOST DAUGHTER belongs to Colman and Buckley. Each is exquisite as Leda, allowing the honesty about motherhood to be presented in full force. Leda is incredibly smart but having two children at a young age interferes with her trajectory as a learned professional. So, when the opportunity to grow in her chosen career presents itself, Leda jumps at the chance. It is only a few years later that she realizes the penalties she will pay.

Both these women are distinct in their ability to project the consequences of these reckless actions. Buckley is soulful and deeply anguished, first by her dilemma of being a mother, and then by the estrangement caused by her decision. It’s an amazingly powerful performance.

And yet Colman is even more astounding. Playing an obsessive observer certainly plays to her strengths, and you simply can’t look away. Leda’s motives for her actions regarding Nina and her young child remain murky, at best, allowing Colman to dance around her objectives. Is she slightly crazy? What will she do next? Colman has turned in another Oscar-worthy performance.

Gyllenhaal has achieved quite the debut with THE LOST DAUGHTER. Her entire cast is exemplary, and her writing is superb. We’ll be waiting to see what she does next.

Based on the novel by Elena Ferrante and written and directed by Maggie Gyllenhaal, THE LOST DAUGHTER showcases Olivia Colman as an accomplished professor of comparative literature on a solo vacation on a Greek island. Leda (Colman) is also the mother of two girls. She is plagued with guilty memories of her relationship with the daughters, shown in flashbacks with her younger self portrayed by Jessie Buckley.

Although I could watch anything with Ms. Colman, events in THE LOST DAUGHTER are sometimes difficult to comprehend as her character behaves quite strangely throughout the film. When she espies a young mother, Nina (Dakota Johnson), interacting with her toddler daughter on the beach, her guilt is manifested as she creates a negative situation for Nina’s family, also on vacation.

THE LOST DAUGHTER seems to be an ambiguous title because it could refer to Nina’s daughter who does go missing for a while, or to Leda herself. At times the younger Leda is shown as a loving mother one would expect, but other scenes reveal her selfishness as she literally walks out of their lives. On the other hand, the film asks is it really being selfish? A sexual tryst with Professor Hardy (Peter Sarsgaard, Gyllenhaal’s real-life husband) suggests the young Leda is more interested in fulfilling her own desires than tending to her daughters’ needs. Hardy also provides Leda with much-needed praise for her intelligence.

We watch with sustained interest to see if and how the older Leda will reconcile her past. Will she ever re-connect with her daughters, or is she destined to live her life essentially alone in a world where love keeps families together?

Gyllenhaal keeps things compelling when Nina’s extended family members are seen as quite obnoxious and self-serving. One scene in a movie theater stands out when Leda sits alone watching a film and five males from the group burst into the auditorium. They are boisterous and completely uncaring that other people in the audience might be enjoying the movie. Leda’s patience runs out as she yells at them to be quiet only to be labeled a bitch. Of course, people who interrupt or otherwise mar the enjoyment of a film, by talking, for example, is a pet peeve of ours (Jeanne and me), so Leda’s outburst is natural and warranted.

Johnson shows some real acting chops as opposed to past work, but I especially liked the performance of Ed Harris as Lyle, the proprietor of the property that Leda has rented. Lyle takes to Leda as a friend, although a potential sexual interest, at least on his part, seems to always be on the horizon.

THE LOST DAUGHTER is a psychological drama with superb acting. The film was entered in a variety of film festivals with much success. I always liked Gyllenhaal as an actress, but the cast also speaks very highly of her approach to directing, so no doubt there is more to come from her behind the camera.