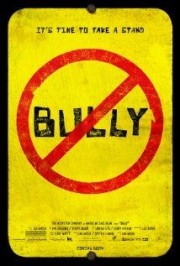 Brilliant --- thought-provoking --- heartbreaking --- and maddening  --- especially when you consider the MPAA rating system, which caused this extraordinary film to be released UNRATED, instead of with a well-deserved PG-13.

"Bully" is a bell-weather movie, which should be seen by every middle school and high school student in America. But instead, it lost that opportunity by one (MPAA) vote, thus making it difficult for teachers nationwide to share these stories with their students.

Beginning in August of 2009 and continuing throughout the 2009/2010 school year, Lee Hirsch and his collaborator, Cynthia Lowen, followed 12-year-old Alex during his entire seventh grade year at a middle school in Sioux City, Iowa. Alex has been bullied his whole life, but this year, on the bus, things begin to escalate. By using a Canon 5d Mark II camera, the filmmakers were able to be present in school without many of the students even aware that they were filming.

Hirsch and Lowen also focused on Kelby, a 16-year-old lesbian being bullied in her small hometown, Tuttle, Oklahoma, and Ja' Meya, a 14-year-old in Yazoo County, Mississippi, who is picked upon so badly that she brings a gun with her onto the bus to school.

The truly horrific outcome of bullying is driven home by Tina and David Long, and Laura and Kirk Smalley, each couple losing sons to suicide due to the effects of long-term harassment. Both sets of parents are incredibly grief-stricken, but despite their anguish, they manage to fight back against the schools and communities that failed their sons.

Hirsch, himself bullied during his childhood and middle school years, puts forth a valiant effort to bring this crisis to light on the big screen. Over 13 million American children will be bullied this year. We have reached epidemic proportions, and as the film shows, there are not a lot of solutions in process.

We watch appalled at the lack of empathy and understanding by the school administrators and police who should  know better. It's scream-inducing when one such person sluffs it off as "boys being boys". Claims are made that these problems will be taken care of, but never are. There is so much bull#%@* bantied around by the school officials in Sioux City that Alex' mom declares to her husband that they have just

One blogger I happened to read, UNFORTUNATELY, criticized "Bully" for not offering any solutions. Obviously unaware of the definition of "documentary", the goal is to inform the movie going audience, perhaps provide an opinion, but not to solve the issue. What Hirsch and Lowen wish is that by watching "Bully" people, i.e., parents, kids, educators, administrators, etc., will be motivated to do something about it. We can certainly hope!

If you were ever bullied in school, or if you know of someone who suffered at the hands of bullies, you are not alone. An estimated 13 million school kids will be bullied at some point in this academic year. "Bully", an ambitious documentary by Lee Hirsch,  focuses on middle school kids and families in Iowa, Oklahoma and Georgia. Like other docs about teenage behavior, this one captures kids in the act.

An instant contender for Best Documentary at the Academy Awards, "Bully" is a significant film that should be seen by every school kid in America. But the overly protective MPAA assigned an "R" rating on the film based on language. When Harvey Weinstein tried to have that changed to allow for widespread viewing, his request was denied, so his company decided to release it as "unrated".

"Bully" opens with home video footage of a dad playing outside with his small son. The

father is David Long, whose 17-year-old son Tyler hanged himself in his bedroom closet. It is a sobering sequence that buries itself in the pit of your stomach as you watch this film unfold. Tyler's story is only one of thousands about kids who take their own lives as a result of low self-esteem and hopelessness directly related to being bullied.

One of the more pitiable stories captured here is that of Alex, from Sioux City, Iowa.

A seventh grader who is constantly abused at school, and especially on the school bus, Alex claims to not feel anything any more. He is desperate to have friends, so he goes along with what he calls kids "just fooling around". But he is punched, strangled and stabbed with pencils as he rides the bus, with nobody intervening. It isn't until writer-director Hirsch and his co-writer Cynthia Lowen decide to release their footage to Alex's parents and school officials that any action is taken.

"Bully" is as infuriating as it is heartbreaking. When we see Alex and others not stand up for themselves, and repudiate their tormentors, it is hard to understand why they do not. When a school principal calls her kids "good as gold" we want to throw something at the screen because she is so stupidly blind to what is happening.

What Hirsch's film has accomplished, even in its infancy, is a movement that is spreading across the country. Spearheaded by families like the Longs of Georgia and the Smalleys of Oklahoma, the anti-bullying campaign appears to be gaining momentum. After watching this searing documentary, one can only hope that parents who are dealing with bullying every day, many of whom have suffered unimaginable loss, living through the terrible nightmare of a child's suicide, can make a difference.