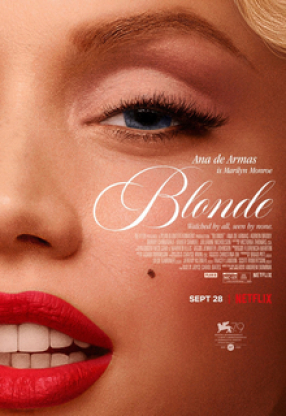 Ana de Armas gives a tour-de-force performance as Marilyn Monroe in this fictionalized account of her tragic life based on the best-selling novel by Joyce Carol Oates. Beginning with Norma Jeane (Lily Fisher) as a child, living with her mentally unstable mother, Gladys (outstanding Julianne Nicholson), writer/director Andrew Dominik holds nothing back in BLONDE, a two hour and 46-minute

exposé told in a nonlinear style.

Growing up without a father clearly affected Norma Jeane, an issue which would continue to plague her throughout her lifetime. Gladys, too, was deeply disturbed by her situation as a single mother, taking her anger and frustration out on her young daughter. After trying to drown Norma Jeane in a scalding bath, Gladys is sent to a mental hospital and Norma Jeane ends up in an orphanage.

But this scandalous affair, which results in Marilyn’s first abortion, is just the first of many traumas she faces while establishing her Monroe stardom. She’s brutally assaulted in a studio executive’s lavish office while his secretary sits smirking outside the door. And she begins receiving letters from someone claiming to be her father.

This only exacerbated her anxiety regarding her lost parent. Before a major film premiere, she’s informed there will be a special surprise waiting for her in her hotel suite following the movie. Marilyn is so convinced it’s her father waiting for her that she leaves immediately, not even waiting for the applause to die down.

When she enters her room, a dark figure is seated in the corner whom she calls “Daddy”. It’s not her father, though. Instead, it’s the Ex-Athlete (Bobby Cannavale) who proposes marriage on the spot. Joe DiMaggio’s, Marilyn’s second husband, name is never used.

He claims he wants to protect her, but he really just wants to own her. He demands that she take roles which aren’t so provocative. Then he witnesses the famous scene in THE SEVEN YEAR ITCH over the subway grates where Marilyn’s skirt blows up, while it’s being filmed --- along with many others gawking at her --- and he beats her senseless. Cannavale is superb at capturing DiMaggio’s brutish masculinity.

Her third marriage to the Playwright (Adrien Brody in a remarkable turn) --- again not using Arthur Miller’s name --- doesn’t fare much better. She suffers a soul-crushing miscarriage and becomes hooked on prescription drugs. Through both these relationships she continues to call her husbands “Daddy”.

BLONDE contains some excruciatingly painful sequences. Another is the deliverance of Marilyn to the President’s hotel room by two Secret Service agents. Not using John F. Kennedy’s name, but clearly him, he motions for Marilyn to perform oral sex while he watches TV and talks on the phone. Afterwards, these same men literally carry her out and dispose of her. Her debasement is now complete.

None of this comes across as fun --- and BLONDE isn’t. But it certainly speaks to the rampant mistreatment of women in Hollywood, no matter how much influence they may have wielded. Norma Jeane created Marilyn Monroe to save her life and gain her the adulation she craved, but in the end, it destroyed her. All of this is widely apparent in Dominik’s spectacular homage to this legendary star.

Cuban actor de Armas is simply magnificent as Monroe --- it’s a complete transformation. With the wigs, makeup and costumes so perfectly replicating the look and style which made her Marilyn, de Armas looks so much like her that at times it’s almost impossible to tell the difference. Her speech pattern, mannerisms --- and that convincing vulnerability --- all come together to create a portrayal that will not be forgotten. De Armas is the definitive Marilyn Monroe.

Filmed in both black-and-white and color, BLONDE is a masterpiece in production designs by Florencia Martin, costumes by Jennifer Johnson, makeup by Tina Roesler Kerwin and hair by Jaime Leigh McIntosh. Without these supremely talented women, de Armas’ depiction would not be complete. Andrew Dominik’s adaptation of Oates’ novel, “Blonde”, is bold and ravishing --- it must be seen to be believed.

She was born Norma Jeane Baker in 1926 and spent many years in a Los Angeles orphanage, surviving a tumultuous childhood. She eventually became the glamorous star of cinema known globally as Marilyn Monroe. She was married three times, and her death at age 36 in 1962 --- due to a drug overdose --- sent tremors of shock around the world.

Writer/director Andrew Dominik languished over the making of his film for 15 years. The final result is BLONDE. For the all-important lead role, Dominik chose Ana de Armas because he saw her in KNOCK KNOCK (2015) and decided she looked just like Marilyn Monroe. As for de Armas it may be difficult to match her extraordinary performance going forward.

Dominik based his screenplay on the 2000 fictional novel by Joyce Carol Oates that was a finalist for a Pulitzer Prize. His movie is a combination of truths and fictionalized events that impacted the life of Norma Jeane/Marilyn. After seeing BLONDE, Oates compared de Armas’ portrayal to past Oscar winners Robert De Niro (Jake LaMotta in RAGING BULL) and Charlize Theron (Aileen Wuornos in MONSTER). At the very least, de Armas should be considered the current front runner for an Academy Award.

It's stunning to see de Armas with the pouty lips, high-pitched voice and iconic blond hair that people associate with Monroe. And she achieves a level of raw beauty in the film that Monroe may never have reached. When the filmmakers recreate a scene from GENTLEMEN PREFER BLONDES, de Armas softly intones “Diamonds Are a Girl’s Best Friend” and it’s like watching a documentary about Monroe’s films.

But she is much more than a walking-talking replica of Marilyn Monroe. De Armas captures the supreme conflict of an unloved and unworthy Norma Jeane, yet as Marilyn, encounters adoring crowds wherever she goes. The hordes of mostly white men who shout her name whenever she exits a limo are grotesquely exaggerated in BLONDE. Marilyn was haunted her whole life by the absence of the father who deserted both her and her mentally deranged and eventually institutionalized mother, Gladys (Julianne Nicholson in a jaw-dropping performance).

Her co-stars were completely mesmerized by de Armas’ transformation. Bobby Cannavale plays her second husband, Joe DiMaggio --- but is only referred to as The Ex-Athlete. He calls de Armas’ “fully immersive commitment to the role chilling”. Adrien Brody plays her third husband, Arthur Miller --- again only referred to as The Playwright. Brody says he felt like he was actually working with Marilyn Monroe and was transported to another time.

Two of Monroe’s acting class friends, Cass Chaplin (son of Charlie) & Eddy G. Robinson, Jr. (son of Edward G.) are played by Xavier Samuel & Evan Williams respectively. The three genuinely like one another and their time together morphs into a sexual relationship.

Whether one likes BLONDE as a film on its own merits or discounts it for whatever reason, I find it impossible to dismiss the movie because of de Armas’ singular performance. The many people behind the scenes who recreate the make-up, hair, costumes et al deserve all the plaudits that I’m sure Jeanne has mentioned. But de Armas, once the movie evolves into Norma’s adulthood, is in virtually every scene, and she is magnetic.

BLONDE has the following tag line: “Watched by all, seen by none”. So many of all the people around her did not recognize the inner turmoil that Marilyn Monroe endured. Her life was ultimately so sad and tragic --- but made incredibly real by Ana de Armas.