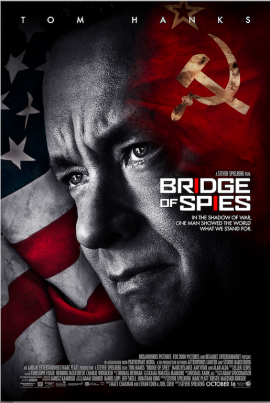 I absolutely "love" when current presidential candidates --- who shall remain nameless --- refer to the era of the 1950's as "the good ole days". I invite them to see "Bridge of Spies" to refresh their memories of the Cold War between the U.S. and Russia, and how most of the country lived in chronic fear of a nuclear war.

Rudolf Abel (Mark Rylance) is an accomplished painter. He's also a Russian spy living in New York City when he is apprehended by the FBI. James Donovan (Tom Hanks) is an insurance attorney from Brooklyn assigned to defend him by the government. At first, this seems an odd choice until we learn that Donovan was a prosecutor at the Nuremberg Trials, and a crack negotiator.

As expected, Abel is convicted, but Donovan prevails upon the judge to not sentence him to death in the interest of political gain. The U.S. had plans to begin spying on the Soviet Union utilizing the new U-2 plane capable of flying 70,000 feet above Earth. When Francis Gary Powers (Austin Stowell) is shot down and captured, Abel has suddenly become very valuable to exchange for Powers.

While a lot of these exploits are occurring, the East Berlin wall is erected, and an American graduate student, Frederic Pryor (Will Rogers) is caught

on the wrong side and imprisoned. It becomes Donovan's mission to negotiate the exchange of Abel for Powers, but he is resolute in his determination to include Pryor in the package.

Directed by Steven Spielberg, a three-time Oscar winner, whose own father had been working for General Electric in Russia during the Cold War, "Bridge of Spies" takes a while to get rolling, but eventually this true story turns into a chilling tale of intrigue, power and a true sense of right and wrong.

The screenplay by Matt Charman and three-time Academy Award winners Ethan and Joel Coen, success for "Bridge of Spies" seems a foregone conclusion. But this genre, without the explosiveness of a James Bond film, can fail miserably. The dialogue and acting are both paramount to a positive outcome. Lacking one or the other, "Bridge of Spies" could be relegated to box office failure.

But the screenwriters were astute and interjected this serious story with just enough humor to prevent it from devolving into a toneless melodrama. Having Hanks star also helps tremendously. He is superior in roles such as this, and portrays Donovan with all of the competence he so obviously deserves.

It's easy to forget that innocent people were gunned down in cold blood as they attempted to scale the Berlin Wall. One scene depicts such an attempt, and Donovan --- and the audience --- is aghast at what he is witnessing. The vicious brutality should remind us of what could still happen today when the subject of a "wall" comes up in presidential debates.

Spielberg's attention to detail is well documented, and "Bridge of Spies" does not disappoint. Everything --- down to the jar of marmalade Donovan's wife, Mary (Amy Ryan) requests --- is perfect to the era. He is drawn to historical events which peak his interest, and consequently Spielberg invites the moviegoers to experience and revel in his curiosities.

"Bridge of Spies" contains no car chases, though the scene of Donovan and Wolfgang Vogel (Sebastian Koch) whipping down the icy streets of Berlin in a fancy sports car does excite. Loud explosions and gun battles are absent also. It's more of a wrangling of wits in a time of extreme terror, when the world sat on the precipice of a disastrous third world war. And Spielberg at its helm is a master storyteller.

The combination of Steven Spielberg and Tom Hanks is tough to beat. "Saving Private Ryan" is an emotionally-charged and thrilling film, and "Catch Me If You Can", starring Leonardo DiCaprio, along with Hanks, is pure entertainment. Now the pair have collaborated on "Bridge of Spies", based on the infamous U-2 spy plane incident that made world headlines at the height of the Cold War with Russia.

With this performance, Hanks once again has thrust himself into the potential pool of Best Actor nominees for 2015. He is flawless as the no-nonsense, unbending attorney James B. Donovan, who early in the film, is chosen by the CIA, to defend Russian spy Rudolf Abel (Mark Rylance, excellent), who was arrested in New York City. Abel is convicted despite Donovan's efforts, but Donovan does persuade a judge to forego the death sentence.

If you're too young to remember the U-2 affair and Francis Gary Powers, the pilot who was shot down in Soviet air space, know that the film is largely based on the exchange of two spies between Russia and the United States. A mediator was required to handle the negotiations, so the task fell to Donovan.

Meanwhile, as the Berlin Wall which separated East and West Germany is under construction, an American economist, Yale graduate Frederic Pryor (Will Rogers), is arrested and incarcerated by the East Germans on a bogus spy charge. Initially reluctant to be at the center of the negotiations for Abel and Powers, Donovan insisted that Pryor also be included in the exchange.

Most men in Donovan's position would have buckled once it was agreed that Powers (Austin Stowell) and Abel would be released into their respective country's custody. Just as Hanks' character in "Saving Private Ryan" refused to leave anyone behind, Donovan is relentless that Pryor not be abandoned. In addition to dealing with the Russians, Donovan must bargain with Wolfgang Vogel (Sebastian Koch, also terrific), the representative of the Communist German Democratic Republic (GDR). The outcome makes up a good deal of the film's tension, and I can't think of any other actor besides Tom Hanks so well suited for the part.

Much of the screenplay deals with the bond, if not exactly a friendship, that develops between Donovan and Abel. Both men were just doing their jobs, and Rylance, considered one of live theater's greatest talents, is a perfect complement to Hanks' everyman appeal as the family man (Amy Ryan plays his wife, Mary) caught up in the international incident.

Screenwriter Matt Charman penned the initial script, which ignited the critical curiosity of the studios. Spielberg later enlisted Ethan and Joel Coen to fine tune it. Aside from a few early lulls in the story, the 135 minute film is mostly riveting moviemaking.

The scenes depicting Powers' plane being buffeted by enemy ground-to-air missiles is alone worth the price of admission. The special effects by veteran Gerd Nefzer are spectacular, putting the viewer in the middle of the fierce action in the sky. And although veteran composer Thomas Newman (cousin of Randy) imbues "Bridge of Spies" with approximately 40 minutes of music, the inevitable crash is all staged without music, just the sounds of the plane in a dire predicament --- a truly dazzling sequence.

Spielberg provides a fascinating look at the Berlin Wall being built, brick by brick. The director, always a stickler for authenticity and attention to detail, filmed the dramatic exchange of prisoners on the same Glienicke Bridge, between East and West Germany. And although the actual swap of spies occurred over 53 years ago, it feels as though we are witnessing it first hand, a tribute to the cinematic skills of Spielberg and Hanks.

The closing credits inform us that Donovan's negotiating career didn't end with the U-2 incident. He was later commissioned by President John F. Kennedy to mediate the release of some 1100 American detainees in Cuba during Fidel Castro's rule. In reality, the actual number of releases he engineered is staggering.

"Bridge of Spies" is another in a long line of films, based on actual events, where the outcome is either well known or easily predicted. Yet it still manages to hold us firmly in its grasp. Although the incident was a major embarrassment to the U.S. and President Eisenhower, Spielberg does not touch on that aspect. His focus is clearly on James Donovan and his part in American history.