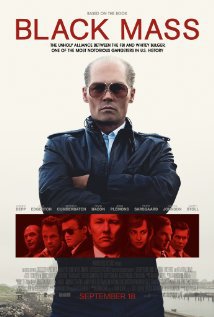 I don't like to be overly effusive in reviewing a movie --- it leads to almost unattainable expectations. But in the case of "Black Mass", one of the best crime thrillers ever, I will say it is the best film so far this year. In the lead role, Johnny Depp has acquitted himself from recent film disasters like "The Lone Ranger" and "Transcendence" (I missed "Mortdecai", Depp's last film, which was also poorly received).

James "Whitey" Bulger, still alive today at age 85, was the brutal boss of Boston's Winter Hill Gang in the 1970's and 80's. He controlled the south side of the city, known as "Southie", reaping huge amounts of cash from drugs, racketeering and extortion, with the occasional murder thrown in, as necessary. Jimmy, as his friends and family called him, loathed disloyalty more than anything else. If you crossed him, you were dead.

No one felt completely comfortable in Jimmy's presence, including his own henchmen. The movie opens with one of them (Jesse Plemons) being deposed by an interrogator (very effective Lonnie Farmer), so we flash back to 1975 when Bulger's career took flight.

The Winter Hill boys shared the criminal spotlight in Boston with the Italian mob that controlled the North End. Local FBI agent John Connolly (Joel Edgerton), who grew up with Jimmy as kids, persuades his superiors (Kevin Bacon and Adam Scott) to use Bulger as in informant, letting him skate on his nefarious activities, in exchange for much-needed inside information about the Italian Mafia.

To further complicate matters, Jimmy's younger brother Bill (Benedict Cumberbatch) is a well-respected state senator in Massachusetts. He must walk the fine line between his sworn duty to his job, and loyalty to his brother. But in his mind it's really no contest.

Depp brings the essential trait of explosiveness to the role, much like Joe Pesci in "Goodfellas". You never know when Depp's character will erupt in a fit of murderous rage. Whether sitting at the dinner table eating a home-cooked meal by Connolly's wife, Marianne (Julianne Nicholson, excellent) along with Connolly and another agent (David Harbour), or escorting a young beauty (Juno Temple) to the apartment she thinks she'll be hiding in, there is always the threat of a violent outbreak by Bulger. Depp, completely absorbed in the role, along with his amazing makeup, is one scary dude.

The three-time nominee for Best Actor should be staring at a fourth nod from the Academy. Depp has completely vindicated himself with an electrifying performance as the vicious, snarling, unpredictable hoodlum who ruled the city of Boston for many years. Yet Bulger had a soft side, especially as it related to his young son Doug (Luke Ryan), and his aging mother. He also appears to have had a good relationship with his girlfriend Lindsey (Dakota Johnson of "Fifty Shades" fame), mother of Doug, until tragedy strikes, changing Bulger's life forever.

Equal to the task of playing the corrupt FBI agent opposite Depp is Edgerton, fresh off his trifecta with "The Gift", where he directed, wrote and starred in a quality psychological thriller. The Aussie actor perfected a Boston accent for "Black Mass" (as did Cumberbatch), and his role as Agent Connolly is the pinnacle, at this point, of his career. He is brilliant.

Other cast standouts include Corey Stoll as a tough-as-nails prosecutor intent on putting Bulger behind bars, Rory Cochrane as Bulger's conflicted right-hand man, Steve Flemmi, and Peter Saarsgard as a flunkie who crosses Bulger.

Director Scott Cooper has only two other films under his belt, but one is the under-rated, and very tense, "Out of the Furnace" (2013) which starred Christian Bale, Woody Harrelson and Casey Affleck. In "Black Mass" Cooper squeezes every ounce of talent from his formidable players. Small, yet terrifying scenes, as when Bulger confronts Marianne in her bedroom, are images not easily forgotten.

Based on the book by Dick Lehr and Gerard O'Neill, this film adaptation has a staying power long after you've left the theater. I can comfortably rank "Black Mass" with the likes of "The Departed" and, dare I say it, "The Godfather" and "The Godfather 2", all Oscar winners for Best Picture. Maybe "Black Mass" even has a slight edge, given that it's a true story.