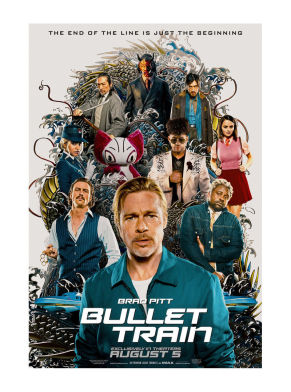 BULLET TRAIN is a bloody mess --- literally and figuratively. It’s not completely bad, but if constant chaos isn’t your thing, you may want to take a pass. It’s a mad ride on a supremely fast train with a cast of insane characters --- one crazier than the next --- but rest assured, there is never a dull moment.

Brad Pitt plays Ladybug, an assassin who is replacing a sick colleague on a job. His handler, Maria Beetle (Sandra Bullock), has pulled him away from his current state of self-reflection and therapy, assuring him that this will be a quick one-and-done.

All he has to do is retrieve a briefcase found on the bullet train heading to Kyoto from Tokyo, then get off at the next stop. What Ladybug doesn’t know is that there are other killers, such as himself, on board the same train with the same exact objective.

Pitt is not above making fun of himself --- or others --- in BULLET TRAIN. He appears completely at ease and seems to be having the time of his life. Unfortunately, the screenplay by Zak Olkewicz, based on the Japanese novel by Kôtarô Isaka, is not as humorous as it should be since the movie is billed as an action comedy.

Initially it was somewhat shocking that the lines intended to be funny simply fell flat. Things improved as the film progressed and the mayhem ensued. But keep in mind, BULLET TRAIN is not for the faint-hearted. There is blood flying all over --- all the time.

BULLET TRAIN does offer an amazing cast. Aaron Taylor-Johnson and Brian Tyree Henry provide a great deal of the levity as brothers, Tangerine and Lemon, British hired killers who rack up an impressive body count. Lemon is obsessed with Thomas the Tank Engine --- and they’re on a train --- so you can see where they’re going here. Not quite as hilarious as one would hope though.

Joey King has a turn as a wicked schoolgirl named Prince, who’s incredibly deadly in her own right. Hiroyuki Sanada and Andrew Koji are father/son Japanese assassins out to get “White Death” (Michael Shannon), head of the largest Japanese crime syndicate. And Channing Tatum makes an appearance, much like Pitt’s cameo in THE LOST CITY, starring Tatum and Bullock, which, by the way, is a much funnier movie.

It’s the screenplay which disappoints. Everyone in the cast is trying their darndest to make it work, but as I’ve mentioned once or twice before --- great actors can only do so much with a convoluted script.

If violent films are a turn-off for you, please stop reading this review immediately because --- what’s the point? BULLET TRAIN stars Brad Pitt as a long-time assassin who discovers inner peace after much of his previous “projects” did not turn out well. His character is Ladybug and Pitt provides much of the comic relief in a film that should have been rated EV for “Exceptionally Violent”.

Outside of Ladybug there is not a likeable character to be found in BULLET TRAIN. They are all killers with no hint of remorse. Tangerine (Aaron Taylor-Johnson) and Lemon

(Brian Tyree Henry) are British brothers/thugs who argue about the number of casualties --- 16 or 17 --- in their latest mass murder (of other bad guys). Their constant bickering is mildly amusing, but it is Taylor-Johnson who stands out with his thick English accent and incredible head of hair. Joey King plays Prince who uses her feminine charms to get what she wants. And Michael Shannon is “White Death” on a mission to avenge the death of his wife. He will not be remembered for this role.

These and a variety of others are all on the bullet train, fastest in the world, hurtling through the Japanese countryside. When the train does stop at a station, riders have one minute to exit before it takes off again.

BULLET TRAIN is a tongue-in-cheek, dark comedy-thriller that will not be to everyone’s taste. But the presence of Pitt will entice many to see it anyway, and with a hefty budget of more than $85 million, the studio hopes that’s the case.

The movie is narrated by Sandra Bullock who is also Ladybug’s handler, and there are two surprise cameos. The screenplay by Zak Olkewicz, based on the book by Kôtarô Isaka, is complicated and not that easy to follow because we are so caught up with the violent action, Pitt’s one-liners and a host of special effects.

Director David Leitch, known for films like ATOMIC BLONDE, JOHN WICK and DEADPOOL 2, was also a stunt man for many of Pitt’s earlier movies. BULLET TRAIN is a highly ambitious effort. However, I loathe panning films that look like a lot of work went into the production. I will say that I did not look away once, i.e., I did not fall asleep, Jeanne, lest I should miss something because Leitch does keep the action moving at breakneck speed.