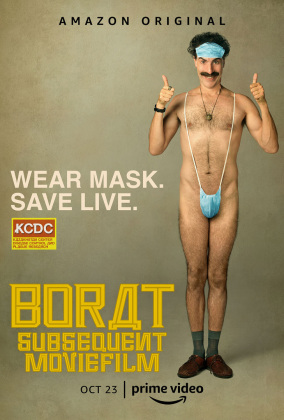 Well, Sacha Baron Cohen has done it again  --- he’s managed to ensnare some rather unsuspecting --- and downright stupid --- Americans in his mockumentary follow-up to BORAT: CULTURAL LEARNINGS OF AMRICA FOR MAKE BENEFIT GLORIOUS OF KAZAKHSTAN (2006). The biggest --- and dumbest --- this time is Rudy Giuliani.

Borat Sagdiyev, a Kazakhstan news reporter, is sent to the U.S. by Kazakhstan’s President Nursultan Nazarbayev (Dani Popescu) to repair the relationship between the two countries. If Borat fails, he will be sentenced to death. The idea is for Borat to present a monkey --- a very special gift --- to Trump. But when the crate arrives, it’s Borat’s 15-year-old daughter, Tutar (Maria Bakalova), inside --- and apparently, she has eaten the monkey. Subsequently, Borat decides to give Tutar to Vice President Mike Pence as a bride --- only first she must undergo a makeover.

Although I’m not really a fan --- I find most of his comedy cringe-inducing --- I do appreciate his efforts. And this time around, BORAT 2 has more of a storyline than the original. Bakalova is truly amazing as the daughter who wants to be like Melania. She really gives Baron Cohen a run for his money in the outrageousness department --- and he doesn’t seem to mind.

There is a lot of the craziness of the original. One of the best is two Trump supporters --- and Qanon conspiracy theorists --- Jerry and Jim, who

unbelievably allow Borat to stay with them, and then get him on stage at a conservative rally protesting the government’s pandemic response. It’s hilarious how unsuspecting they are.

I seriously could have lived without the father-daughter dance at a debutante ball in Macon, Georgia --- and seeing Borat defecating outside Trump Tower in New York City. But this is what has made him successful, so who am I to argue?

I truly can’t say that I liked BORAT 2, but I loathe when critics pan a film because it doesn’t appeal to them, rather than judging a movie on its merits. And I’m talking to you --- all you young male critics --- who disregard and unfavorably review films about controversial females.

There are quite a few laugh-out-loud moments, but the crowning achievement may just be the scene with Tutar and Giuliani in a hotel suite. No matter how much the “president’s” lawyer may try to deny it --- it’s there on film for the whole world to see.

Sacha Baron Cohen, in BORAT SUBSEQUENT MOVIEFILM, the follow-up to his smash hit from 2006, has managed to at least equal that movie for sheer outrageousness. That should please his legions of fans who might fear that a sequel frequently flops.

Baron Cohen takes no prisoners when it comes to mocking and parodying right-leaning individuals. With his hilarious assortment of costumes --- how do people fall for this stuff? --- he finagles his way into situations for which most of us would be arrested.

But he is fearless and in this second film he enlists the aid of Maria Bakalova who plays his daughter Tutar. Ms. Bakalova, a 24-year-old from Bulgaria, is as uninhibited as Baron Cohen --- and that says a lot. Her transformation in the film from a ratty, unkempt young woman with a distinct unibrow, living in a cage, into a blonde hottie is dramatic. Just ask Rudy Giuliani --- see below.

So how does one review a Sacha Baron Cohen film without giving too much away? My answer is you don’t, so this review will consist of mere highlights of what you can expect. No synopsis here --- it really doesn’t matter.

Unless you’re living under a rock you’ve already seen the widespread news reports about Giuliani’s “interview” with Bakalova’s Tutar character posing as a conservative journalist. My first thought was how can Giuliani be so stupid as to behave as he does in front of a cameraman? The answer is --- hidden cameras in the hotel room.

Other highlights of BORAT 2, in no particular order:

At a Macon, Georgia debutante ball Borat and Tutar regale the crowd with their own dance routine --- for a while. This is the most hilarious sequence in the entire film. Kudos to the camera crew who capture the reactions of the guests in the room.

Borat interrupts a Mike Pence speech dressed as Trump in a fat suit. He is quickly escorted from the auditorium, but not before we see a most quizzical look on Pence’s face.

Tutar interrupts a Christian Woman’s conservative meeting to reveal to the crowd of initially welcoming onlookers that she discovered her vagina does not have teeth and didn’t swallow her arm. You can’t make this stuff up.

Borat inserts himself on stage at an outdoor gathering of Trump supporters who mock Covid-19 and chant along with him about the “Wuhan Flu”. Two rubes in the crowd had befriended Borat earlier in their home and confessed to him that they had heard rumors of Democrats involved in a cabal where they drink the blood of children.

BORAT 2 boasts a team of 13 writers, including Baron Cohen himself. Naturally, this movie is not for everyone, but would I see it again? Hell

yes ---there is a lot one could miss the first time around. The filmmakers could have included subtitles when the chatter/song lyrics are not crystal clear.