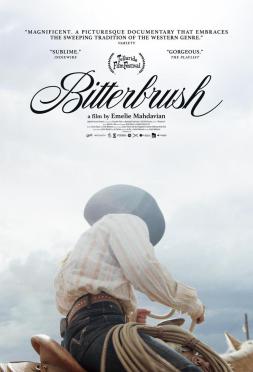 BITTERBRUSH is a profound study of female friendship. Two women, Hollyn Patterson and Colie Moline, spend a summer season together as range riders in a remote, albeit breathtaking, part of Idaho, totally off the grid with only the horses they ride and their working dogs for company.

Director Emelie Mahdavian’s goal wasn’t just to show that women can do a job that has been historically completed by men, which is true. But more importantly, these two females excel at this profession as told to Emelie by local ranchers. Range riding is a bloody difficult job which requires skill with animals, strength of character --- and simply strength overall --- period.

Hollyn and Colie are tasked with driving 500 head of cattle over a ridge with the assistance of their remarkable herding dogs. They travel many, many miles per day and are also responsible for keeping the herd safe from predators, the elements or any danger that may present itself.

These are very tough women whose expertise is becoming a dying art. Not many want to be out of touch in a cabin with no toilet facilities --- and many times no cell phone reception. The work is extremely satisfying for Hollyn and Colie, but also treacherous. Towards the end of their committed time, the weather turns inclement, and they are caught in a blizzard. What makes for compelling viewing for the audience can become life-threatening for these women and their charges.

At one point, Hollyn and Colie find a very sick cow whom they presume is still carrying her dead calf inside her. Despite all the other cattle, they take great care in helping this poor cow reach the summit so she can begin the easier trek down the other side. They marvel that she hadn’t been attacked by wolves, as again, predators are a major issue.

BITTERBRUSH also focuses on Hollyn and Colie’s down time. Whether it’s making breakfast in the cabin or cooking over the firepit at night, we are privy to their thoughts on many subjects. Colie offers a tear-inducing tribute to her mother, who lived a hard life and was a “tough woman”. She describes spending three days at her mother’s side before she died --- memorizing her hands. In her brief soliloquy, Colie speaks to how many of us feel about our own mothers --- and the pain of missing them.

All of Hollyn and Colie’s hard work unfolds in front of some of the most spectacular scenery ever captured on film. The mountain ranges are so magnificent, at times they appear like paintings in the background. And none of this is lost on these two range riders. Several times they stop to comment about the beauty surrounding them. The two cinematographers, Derek Howard and Alejandro Mejía, have done an astonishing job --- and mostly on horseback to boot.

But perhaps the most striking element of BITTERBRUSH is Mahdavian’s choice for music. Pianists Greg Anderson and Elizabeth Joy Row perform keyboard works by Bach and it is absolutely perfect. It’s not at all what one would expect from a documentary about women working as range riders and that’s exactly what makes choosing this music so brilliant. That, and the way Bach’s rich piano chords complement the sublimely beautiful landscape. Divine ---

Friendships between women are unique, as evidenced by this relationship in BITTERBRUSH. As the documentary winds down and their time range riding comes to an end, Hollyn announces she is pregnant. So, this adventure will not be repeated, but what memories each will have. And they are committed to staying in touch.

Ms. Mahdavian was eight months pregnant herself when working on BITTERBRUSH. Hollyn and Colie were amazed by her fierce determination to complete this unforgettable project. None of it was easy, but now these three women have a bond that will last a lifetime. For all women out there, gather your besties and experience this earnest exploration of love, friendship --- and the satisfaction of a job well done.

BITTERBRUSH is director Emelie Mahdavian’s second documentary, and it is unique because she was already good friends with one of her subjects. The film focuses on two women who choose a lifestyle that most people would never contemplate.

Hollyn Patterson and Colie Moline are known as range riders, that is they herd cattle on horseback at the behest of the owners who hire them via specific-length contracts. Their job is to move the animals around to protect them from predators and ensure that the herd is not overgrazing. This particular contract finds them in a remote part of Idaho. Friends for five years, they each have a number of working dogs to help move the cattle.

Hollyn and Colie appreciate the simpler things in life, like the 100-year-old cabin in which they live together for this duration. With sketchy plumbing, no TV and only smart phones as a modern convenience, Colie reacts as if it were a palace. They face long days framed by different seasons, including an autumn of cold and snow. Colie, especially, is eager to find range riding jobs that are consistently longer instead of those that last only a few months.

Hollyn’s boyfriend and future husband is Elijah who has minimal on-screen time in BITTERBRUSH. Hollyn becomes unexpectedly pregnant, and she and Elijah eventually welcome Flossie into the world, whom we don’t see but hear about later in her long-distance conversation with Colie.

BITTERBRUSH is about friendship and trust. Hollyn tends to be the “handy” one, splintering wood for their campfire and nailing parts of a fence to wooden posts. Colie appears to be the more spiritual of the two. We get a brief glimpse of a book in her possession dealing with “happiness according to Jesus”.

There is some remarkable cinematography by Derek Howard and Alejandro Mejia, including one memorable scene revealing hundreds of head of cattle they have moved around, again with the invaluable help of their dogs. Music by Bach, Mahdavian’s personal favorite composer, punctuates much of the film, especially where there is no dialogue.

The best singular moment in BITTERBRUSH has Hollyn trying to “break” a reluctant horse she names Marilyn (after that “old actress” Monroe). Marilyn does not want to be tamed, but Hollyn’s persistence pays off as she gradually gets the horse to accept a bridle, a thick blanket and finally a saddle. The bond that develops between horse and tamer is special to witness. Mahdavian devotes a good portion of her film to this fascinating sequence.

BITTERBRUSH is a most unusual work. It’s almost like a page out of the old West, with at least one reference to Facebook to remind us this is present day.