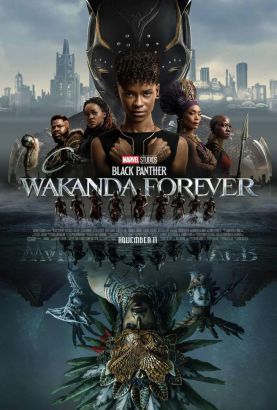 Director Ryan Coogler, who co-wrote the screenplay with John Robert Cole --- and Disney --- has created a remarkable and memorable tribute to the late Chadwick Boseman at the very beginning of BLACK PANTHER: WAKANDA FOREVER. Instead of the usual montage of Marvel Cinematic Universe heroes, this time images of Boseman as the Black Panther, T’Challa, are flashed across the screen to remind us that the fierce Wakanda leader is dead, but certainly not forgotten.

With the untimely death of Boseman in 2020, the filmmakers had to rethink the direction of this next chapter and chose a new theme about love and loss. To explain the absence of T’Challa, his sister, Shuri (Letitia Wright), is shown scrambling in her high-tech laboratory for a cure for her brother whom we never see. He dies of an unknown cause and Shuri and her mother, Queen Ramonda (Angela Bassett), are left to mourn this great loss along with the rest of Wakanda.

A year passes and Shuri is still not over T’Challa’s death. And everyone else in the world is after Wakanda’s greatest resource, vibranium, including the United States. But Queen Ramonda, who appears before the United Nations, is firm in her resolve not to share this precious element. Someone has been attacking ships in the Atlantic Ocean which are in place to mine for vibranium, and Wakanda is suspected.

But Shuri and the Queen learn that it is, in fact, an underwater civilization previously unknown doing the damage. Namor (Tenoch Huerta Mejia), the ruler of Talokan, the secret civilization, at first approaches the two women in peace asking for their help in destroying the rest of the world and keeping the vibranium for themselves. When they refuse, Namor has Princess Shuri kidnapped along with Riri Williams (Dominique Thorne), a 19-year-old MIT brainiac who developed technology for detecting vibranium.

Colossal battles between Wakanda and Talokan ensue with all hands on deck for Wakanda, including M’Baku (Winston Duke), ruler of Jabariland, T’Challa’s wife, Nakia (Lupita Nyong’o), who has been residing in Haiti since her husband’s passing, Okoye (Danai Gurira), leader of the Dora Milaje, Ayo (Florence Kasumba), an elite enforcer of the Dora and Aneka (Michaela Coel), a highly-skilled fighter and member of the Dora. Per usual with MCU movies, these scenes go on forever and become mind-numbing, even with the spectacular special effects.

Which brings us to the biggest complaint regarding BLACK PANTHER: WAKANDA FOREVER. At two hours and 41 minutes, it’s just too long. Had Coogler trimmed at least 15 minutes, if not 20, it would have been a much better moviegoing experience. Plus, Coogler and Cole’s script has a lot happening, perhaps one subplot too many. BLACK PANTHER: WAKANDA FOREVER is at its best when focusing on the main female characters and their processing of their profound grief over the loss of King T’Challa.

Wright and Bassett give astounding performances. Their anguish is palpable and heartbreaking. And Wright is particularly mesmerizing, especially in a dream-like sequence between Shuri and a certain someone from her past. It’s the women who rule in BLACK PANTHER: WAKANDA FOREVER, with Gurira, Kasumba and Coel completing the female forces to be reckoned with.

Ludwig Göransson, who won an Oscar for BLACK PANTHER, returns to compose both the score and the soundtrack for BLACK PANTHER: WAKANDA FOREVER. He and Coogler, who attended the USC School of Cinematic Arts together, “wanted to create a truly immersive musical experience, where songs and score go hand in hand, to create one musical statement from beginning to end.” It’s a marvelous collaboration, with Göransson’s achievements adding a whole other level to the BLACK PANTHER: WAKANDA FOREVER experience, which must be seen on the biggest screen you can find.

Following the tragic death of Chadwick Boseman, star of the 2018 blockbuster BLACK PANTHER, director/co-writer Ryan Coogler and his staff decided that the 2022 sequel should focus on how King T’Challa’s surviving family members are coping with his absence.

The result is a stunningly beautiful film --- aesthetically, at least --- that will have Marvel fans cheered if not cheering. BLACK PANTHER: WAKANDA FOREVER garnered only a smattering of applause from our screening audience, but presumably everyday moviegoers and Marvel fans will be more enthusiastic.

The main problem with this film is its length. At two hours and 41 minutes it unfortunately includes some rather boring scenes, at least to someone like me who is not a Marvel Universe devotee. Like so many others in the MCU, the battle sequences are too frequent and too long. I fully understand that the filmmakers wanted to capitalize on things like the underwater world of Talokan whose inhabitants live and breathe in the ocean. This fictional place, like so much of BLACK PANTHER: WAKANDA FOREVER, was a labor of love for the vast crew behind the film, and it makes sense that so much screen time is devoted to this and other aspects.

The technological gadgetry is interesting to watch. And everyday references like “let’s catch a Bulls game in Chicago” are a novel way to remind us that Wakanda is very much a current world entity in the Marvel Universe.

As for the cast, Angela Bassett is appropriately regal as Queen Ramonda. Her determined resistance to demands made at the United Nations is a reminder of her royal authority as Wakanda’s leader. Bassett is spellbinding in every scene she appears. Letitia Wright is incredible as T’Challa’s sister Shuri. She is the center of BLACK PANTHER: WAKANDA FOREVER and the love she exhibits for her deceased brother is very real.

Martin Freeman (CIA operative Everett Ross) and Lupita Nyong’o (War Dog Nakia) also star. There is also more than a subtle hint at what may materialize as a third film in the franchise.