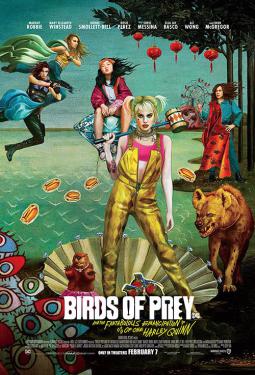 YAY for girl power! Margot Robbie and her female co-stars kick ass in BIRDS OF PREY, the DC Extended Universe follow-up to SUICIDE SQUAD (2016), which --- full disclosure --- David and I didn’t see. But, no matter, this superhero film is a blast --- Robbie is in fine form and hilarious!

Harley Quinn (Robbie) has just been dumped by the Joker and is trying very hard to survive on her own. She finds respite above a Chinese restaurant owned by Doc (Dana Lee). She resists telling people about her recent breakup because the Joker was her protector. But once the cat is out of the bag, EVERYONE who has ever had a grudge against Harley comes looking for her.

BIRDS OF PREY boasts quite a cast of dynamite females. Jurnee Smollett-Bell stars as Black Canary, who’s a singer in Black Mask/Roman Sionis’ (Ewan McGregor) nightclub. Mary Elizabeth Winstead wields a mighty crossbow as the Huntress and Rosie Perez plays Renee Montoya, the boozy Gotham City Police Detective who wants to bring down Sionis. And last, but certainly not least, scene-stealer Ella Jay Basco is on board as Cassandra Cain, the young pickpocket who creates all kinds of havoc for everyone.

David, who has a very hard time acknowledging these superhero movies are meant for fun and pure entertainment value, did not appreciate BIRDS OF PREY. I, on the other hand, loved every single minute. Even the gratuitous violence didn’t bother me. I got such a kick out of this amazing group of women, and I was totally engrossed.

Robbie is remarkable --- I simply couldn’t take my eyes off her. Despite the goofy pigtails and the rest of her ensemble, she is still incredibly gorgeous --- those big beautiful eyes of hers say it all. But I was impressed with all of them, especially Smollett-Bell and Basco. They all look like they are having so much fun. And the big fight scene towards the end which culminates in a fantastic motorcycle/Rolls Royce car chase with Harley being pulled on roller skates is a wonderful bit of filmmaking and editing.

To add to the female dominance, BIRDS OF PREY is directed by Cathy Yan and written by Christina Hodson. Two of the producers are Robbie and Sue Kroll --- so take that all of you Academy members who won’t nominate women!

I cannot end before I mention Chris Messina, who is glorious as Sionis’ crazy evil henchman, Victor Zsasz. He is incredibly dark and creepy --- I love it. McGregor is awesome, too, especially when he’s acting out as the bubbly, good-time-Charlie club owner. But, Messina ---

A mostly all woman affair --- from the cast to the director to the writer --- that is BIRDS OF PREY. That’s probably why Jeanne likes this film, but it isn’t the reason why I don’t.

For starters, its over-the-top violence and visual effects get quite redundant and ultimately not that interesting. Yes, Margot Robbie as Harley Quinn (reprising her 2016 role from SUICIDE SQUAD) has cute moments and even cuter up-close facial expressions. And certainly, the bad guys get their deserved comeuppance from Harley and the likes of the Huntress (Mary Elizabeth Winstead) and Black Canary (Jurnee Smollett-Bell).

Speaking of villains, Ewan McGregor as Roman Sionis and Chris Messina as his right-hand man and chief torturer, Victor Zsasz, are very nasty people. The latter even cuts off, in one gruesome scene, the faces of a trio who evidently wronged Sionis. McGregor is a bit over-the-top, but that’s acceptable due to the cartoonish substance of this film. Rosie Perez plays detective Renee Montoya with little effectiveness. And Ella Jay Basco as the diamond-swallowing pickpocket Cassandra Cain is at least appealing in her feature film debut.

One bright spot for me is Harley’s domesticated hyena, a laughing one, at that. And --- spoiler alert --- Harley finally gets her coveted egg sandwich.

BIRDS OF PREY is R-rated for good reason --- plenty of gore, plenty of profanity. I also wondered if the actors did any of their own stunts. This $81 million film has a mega crew, including at least 85 stunt people, so probably not. I will say that Robbie swings a baseball bat with very convincing form.