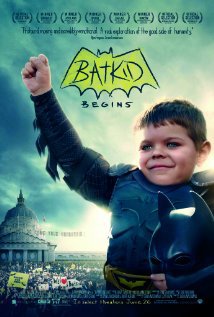 "Batkid Begins" is 89 minutes of true pleasure! Make-A-Wish Foundation goes above and beyond to grant a five-year-old cancer patient's request to be Batkid for a day, Friday, November 15, 2013.

This documentary directed by Dana Nachman, who also co-wrote the screenplay with Kurt Kuenne, is an outstanding and exemplary depiction of a phenomenon that went viral around the world. Miles and his family reside in Tulelake, in northern California. He was diagnosed with Lymphoblastic Leukemia when he was 18 months old. Because of his age, when first approached by Make-A-Wish, his parents Natalie and Nick thought he was too young. When his last treatment was completed in June 2013, they felt it was time for Miles' wish to come true.

When Make-A-Wish Greater Bay Area set out to arrange Miles' request, little did they know that the day they planned would blossom into a full-blown media-hyped event, with people from all over the world taking notice. What began as a simpler outing quickly turned into an all-day escapade involving the mayor, Ed Lee, the police, hundreds of volunteers, and even Lou Seal, the mascot of the San Francisco Giants. If watching "Batkid Begins" doesn't move you, I seriously don't know what will.

Nachman and Kuenne have created a masterful account of this auspicious event. They are both from the bay area and were excited to tackle this project. David and I met Kurt, who also edited "Batkid Begins", at the Chicago Critics Film Festival where we featured their film this past May. He is one of the nicest persons we have ever encountered, and is truly proud of their efforts.

At 89 minutes, "Batkid Begins" never lags. It is a beautifully directed and edited documentary, which never wallows in Miles' condition or disease. "Batkid Begins" is serious when it needs to be, but appropriately fun and delightful, because this is one helluva story. People from all over were drawn to Miles, not just because he is darling, but because of his spunk and determination to beat his cancer. And who doesn't love a five-year-old superhero?

Initially Make-A-Wish was expecting, maybe, a couple of hundred people to show up for Miles' special day. Instead, over 25,000 spectators lined the streets and cheered for Miles as he rode past with Batman in their "Batmobile".

And that was a key element --- getting just the right guy to befriend Miles and be his Batman. This was accomplished by having Miles and his parents arriving in San Francisco a day early so Miles could just hang out with actor Eric Johnston, who offered to play Batman. Then the next day, when all of the hoopla started, Miles was comfortable, and never shied away from the big crowds.

He didn't necessarily understand everyone's interest in his adventure, but he was a real trooper, and hung in there for the entire crazy experience. When all was finally over, and Miles and his parents were back at their farm, Dana asked him if it was everything he expected --- to which he nonchalantly replied "yes". Hilarious ---

Whether you remember this worldwide media frenzy or not, "Batkid Begins" is an important documentary --- and should be seen on the silver screen.

Five-year-old Miles Scott only wanted to be Batkid for a day, and save Gotham City. Diagnosed with leukemia at age 18 months, the Make-A-Wish Foundation and the city of San Francisco got involved a few years later, in 2013, to fulfill his request. The tiny snowball they hoped would attract a couple of hundred people turned into an avalanche of worldwide attention. You know when the Chief of Police acts as the Commissioner of Gotham City that something special is happening. Ultimately, the folks who lined the streets on November 15th that year numbered more than those who turned out for the World Series winning Giants.

The documentary follows the detailed exploits of many people responsible for the eventual outpouring of love and affection for Miles. But none of it would have succeeded if not for the dedication of Eric Johnston, a veteran visual effects expert and movie stuntman who dressed up as the adult Batman, earning Miles' trust and friendship.

Other actors portrayed The Penguin and The Riddler, and succumbed to Batkid's heroics as he fearlessly brought them to justice. In one memorable scene, a woman is "tied" to streetcar tracks with a cable car bearing down,  but Batkid saves the day as he "rescues" her in the nick of time.

"Batkid Begins" was a big hit at Chicago's esteemed Music Box Theatre during the 3rd Annual Chicago Critics Film Festival this past May. The audience reaction was stunning. Moviegoers of all ages were glued to the screen as the story of little Miles unfolded. Amidst the gales of laughter, more than a few tears were shed. Co-writer and editor Kurt Kuenner, a documentary-maker himself, represented the filmmakers. Director Dana Nachman was unable to be there.

The innocence of Miles Scott is clearly what makes this story work, and this film so endearing. Strutting around at times like a mini John Wayne, to the audience's delight, he believed everything that was happening. And if cynics want to condemn this as manipulative, or taking advantage of a young mind, they miss the point. What we do know is that millions of people around the globe latched onto this social media-driven event (including President Obama), and for one day, at least, the optimists among us could revel in the good-heartedness of people the world over.

I will always remember Miles' reaction to a question posed by Nachman after all the hysteria had subsided. Sitting with his parents on their living room sofa, she asked if they expected such a huge response to the day's events. While his Mom and Dad considered their answer, Miles didn't hesitate as he nodded his head --- with a certifiable "Yes!".

Hopefully word-of-mouth will propel this film into a major hit, rather than relegate it to video. But the best news of all? Miles' cancer, at last report, is in remission.