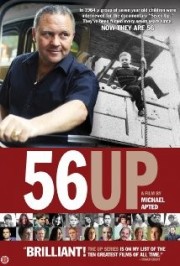 I have not seen the other documentaries featuring this group which has been followed since age seven, but I was intrigued by the premise. The good news is that prior knowledge is not a necessity to enjoy this installment.

What began in 1964 by Granada Television in Britain has morphed into a series that has never been duplicated. Starting with 14 school children from various socio-economic backgrounds, the original piece was 40 minutes in length.

The success of the program encouraged Michael Apted, a researcher on the original, to follow up seven years later. Apted is an accomplished film director ("Gorillas in the Mist") who took it upon himself to continue this project, which is now on its eighth feature. He interviews all of the subjects, though is never seen, and narrates the film.

Because of the longevity of this series, the participants, female and male, feel comfortable with Apted and reveal very personal aspects of their lives. To aid those of us who haven't been following in the past, there is plenty of footage from the seven previous documentaries.

I found this experience mesmerizing. Many of those involved have suffered greatly, but persevered, including Neil. At the age of 28, Apted found him homeless, wandering around the Scottish Highlands. In this installment, though still ragged around the edges, he is a local councilman in a village in Cumbria in North West England. Neil still battles depression and other demons, but also has friends upon whom he can rely.

The running time is over two hours, but the lives here are richly revealed and vastly rewarding.