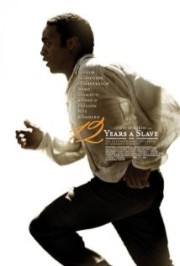 The problem with film festivals, such as Telluride and Toronto, is the hype that comes out of them. Word on the street has it that "12 Years a Slave", a crowd and critic favorite at both, is the film to beat come Oscar season, not only in the Best Picture category, but others as well, including Best Actor for Chiwetel Ejiofor.

The hyperbole can thus be damaging, as we expect "12 Years a Slave" to be the next "Citizen Kane". I was so anxious to see the film, I could hardly contain myself, but once it was over, I was confused and a little let down, which is the result of the movie being too over-hyped. I was anticipating a much "bigger" film, whereas "12 Years a Slave" is a masterful, smaller production about a HUGE, unforgivable part of this nation's history. As I reflected upon the film, I realized that it truly is an outstanding film.

Based on the real-life story of Solomon Northup (Ejiofor), and his memoir about this horrific chapter in his life, "12 Years a Slave" catapults us into a time many people would like to forget or pretend never happened. Northup was a free black man residing in Saratoga Springs, New York, with his wife and two children. He was an accomplished violinist and enjoyed a favorable relationship with his fellow townspeople.

In April 1841, he is duped by two white men, Brown (Scoot McNairy) and Hamilton (Taran Killam), into traveling to Washington, D.C., on the pretense of playing his violin. He is then drugged, chained and kidnapped, and sold into slavery in Louisiana.

Northup is first purchased by William Ford (Benedict Cumberbatch, having a big year with "Star Trek Into Darkness" and "The Fifth Estate"), a benevolent plantation owner, who appreciates Northup's intelligence and many talents. Unfortunately for Northup, Ford employs a cruel and jealous slave master, Tibeats (Paul Dano), whose distinct hatred of Northup becomes a liability for Ford. He is forced to transfer his debt and Northup to Edward Epps (Michael Fassbender), a plantation owner with the reputation of "breaking slaves".

It is with Epps that Northup spends the majority of his time as a slave --- actually it was 11 years, 8 months and 26 days. Epps is a severely flawed man, quoting scripture one minute, forcing his favorite female slave, Patsey (Lupita Nyong'o), to have sex the next, while his jealous, manipulative wife (Sarah Paulson) harangues and belittles him.

Directed by black British director Steve McQueen ("Hunger", 2008, "Shame", 2011), with a screenplay by John Ridley, "12 Years a Slave" is an engrossing, eye-opening experience that delves into the deplorable world of slavery in this country. As opposed to last year's outrageous exploitation by Quentin Tarantino's "Django Unchained", "12 Years a Slave" provides a truer version of how slavery and its cruel injustices affected the lives and mental stability of so many.

Ejiofor is the perfect choice to portray Northup. He is a marvelous actor, from his first outstanding performance in "Dirty Pretty Things" until now. He embodies Northup totally, and every crack of the whip and brutal treatment is emblazoned upon his face. But, never is the hope of eventually getting home ever lost by Ejiofor as Northup. I was amazed while watching him work, that he didn't lose his temper during filming and simply strangle Fassbender --- the debasement being so profound. The Best Actor category for this year's Oscar nominations is shaping up to be a doozy.

Though Northup suffered greatly, the most heartbreaking role in "12 Years a Slave" belongs to Nyong'o as Patsey. Her vulnerability is wrenching, though, as a cotton picker, she is a force to be reckoned with. She out-picks everyone on Epps' plantation, and she is the unfortunate object of his desires. Even worse than the men, the female slaves had no way to defend themselves, and that is abundantly clear in Nyong'o's unforgettable portrayal of Patsey.

McQueen has directed a film that will be hard to beat. It's a tremendous expose into this disturbing and unconscionable institution, and one that can never be exposed enough, lest we forget. The spectacular photography by Sean Bobbitt and mesmerizing score by Hans Zimmer add a great deal to McQueen's efforts. Though, about 15 minutes into our screening, an African-American female and her guest stormed out in a rant about white people's treatment of black people (obviously not knowing McQueen is, in fact, a black man), "12 Years a Slave" is an honest, chilling real-life drama, unlike many others.

As showcased in Steve McQueen's latest film "12 Years a Slave", the images of slavery are the most vile, sadistic and brutal ever depicted on screen. Starring Chiwetel Ejiofor as Solomon Northup, the real-life African-American kidnapped and sold into servitude in 1841, and Michael Fassbender as Edwin Epps, his unrelenting slave owner, the movie is a stern reminder that this period in American history should never be repeated. Often difficult to watch, "12 Years A Slave" is made in the same spirit of Holocaust films that serve a similar purpose

Despite that --- and I will be in the minority on this --- the movie didn't resonate with me as it probably should have based on the pre-release hype. I never was fully involved with the actors, primarily because of a lack of character development.

We first meet Solomon at his home in Saratoga, NY, some 20 years before the Civil War. He and his family --- wife Anne (Kelsey Scott), daughter Margaret (Quvenzhané Wallis, "Beasts of the Southern Wild"), and son Alonzo (Cameron Zeigler) --- are educated, well-dressed and well-respected around town. Solomon makes his living as a talented violinist, reaping praise for his musical ability.

Solomon is introduced to two men who entice him to leave town for a musical gig which will earn him considerable money. He heads to Washington, D.C., and as promised, makes some nice extra income. The two scalawags (played by Scoot McNairy and Taran Killam) pretend to celebrate the moment, but ply him with drug-laced wine. Solomon awakens to find himself in chains, and is beaten badly by his captor.

In one scene, the future slaves are publicly humiliated, including appearing naked so that slave sellers like Freeman (ironic name, played by Paul Giamatti) can point out their unique qualities to buyers. Thus begins a series of encounters where Solomon is bought and sold, as are other black men, women and children, ending up with mostly cruel and conscienceless masters.

His first owner, Ford (Benedict Cumberbatch), is actually compassionate and decent. Ford's odious mistress (Liza J. Bennett) is quite the opposite, with zero sympathy for a slave woman separated from her children. But Solomon's time at his plantation is short-lived because of a confrontation with one of Ford's hired hands, Tibeats (Paul Dano). Perhaps the most wrenching scene of all has Solomon surviving an attempted lynching, at the hands of Tibeats, by standing on his tiptoes for hours to avoid choking, the noose still around his neck. Only one brave soul makes a move to help him by giving him water.

Eventually bought by Epps, Solomon is alternately treated well, because he can play the fiddle, or brutalized with a whipping for some perceived transgression. Epps has a hateful wife (Sarah Paulson), whose disdain for the slaves defines her existence. Epps turns to a slave woman, Patsey (Lupita Nyong'o) for sex and a twisted form of companionship. When she ventures off the farm to secure a bar of soap, she is savagely whipped, first by Solomon because Epps demands it, and then by Epps himself. The frequent whipping scenes are difficult to sit through, but necessary to portray the brutality of the era. McQueen holds nothing back in his graphic displays of the ugliness taking place.

Yet, through all of this, I was not much moved. I couldn't shake the sense that these were just actors going through the motions. Solid veterans like Dano, Fassbender and Giamatti are all over-the-top in their performances. Outside of Cumberbatch and Ejiofor's fine work, only Brad Pitt's turn as the Canadian abolitionist Bass rings true.

When Solomon's rescuers --- whom he knew from his previous existence as a free man --- appear with the local sheriff, it should have been a defining moment in the film, that time when the audience feels the satisfaction of true revenge extracted. The final scene of Solomon's redemption should have been the ultimate triumphant conclusion to his incredibly horrific journey, yet I didn't find it convincing or emotional, as I did with Tom Hanks' brilliant turn in "Captain Phillips". That's odd, given that Phillips' odyssey lasted five days as opposed to Northup's 12 years.

"12 Years a Slave" is director McQueen's first effort since "Shame" in 2011, also featuring Fassbender. John Ridley, who wrote the screenplay from the book that Solomon Northup published in 1853 after securing his freedom, has a mostly TV background. I suspect the book is as gripping as the film is disappointing.

The filmmakers strangely decided to introduce the film with a brief appearance by Ejiofor to proclaim the movie's value. That, along with the pre-Oscar buzz, was perhaps too much to live up to for me.

One interesting factoid from the production notes: "You would have to watch Steve McQueen’s "12 Years a Slave", with its 134 minute-running time, close to 50,000 times, to equal the amount of time Solomon Northup spent as a slave".