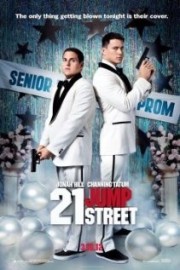 I can't believe I'm writing this, but "21 Jump Street" is very funny stuff. Everyone knows Jonah Hill is hilarious ("Get Him to the Greek"), and extremely talented ("Moneyball"), but who knew Channing Tatum had it in him?

Based on the television series (which was NOT a comedy) created by Patrick Hasburgh and Stephen J. Cannell, this story was concocted by Jonah Hill, along with Michael Bacall, who also wrote the screenplay. Jump Street is still a secret police force unit, but instead of totally cool and totally hot Johnny Depp playing Officer Tom Hanson, we now have Schmidt (Hill) and Jenko (Tatum) as the undercover cops who must return to high school to investigate a dangerous drug ring threatening to spread out of control, with a new and deadly narcotic.

Normally, I find these remakes tedious at best, but Bacall, along with directors Phil Lord and Christopher Miller, has managed to take all of our fears of high school, past and present, and make them wildly amusing.

Jenko, who was the popular jock when he and Schmidt were in high school, is now the odd man out. He drives a muscle car and parks in the handicapped spot --- all of which ostracizes him from the now "cool" kids who are into recycling and saving the planet.

Instead, it's Schmidt, a real dweeb when he was going through those formative years, who is now looked upon as hip.

True, many of the situations in which Schmidt and Jenko find themselves are cliched, and have been done before, but watching Hill and Tatum going through the motions is way more hilarious than it should be.

Schmidt and Jenko actually move back in with Schmidt's parents, Annie (Caroline Aaron) and David (Joe Chrest), and pretend to be real brothers. Their house party is one of the funniest scenes in the film, especially when Annie comes back home to find her favorite vase shattered and the photos on her wall graffitied.

But my favorite episode is Schmidt being accosted by his nosy neighbor Phyllis (Geraldine Singer) in a shoe store. She will NOT shut up about  him being undercover, and he's in the company of his "friends". There is nothing else he can do, so he shoves her into a stack of shoe boxes to shut her up. Juvenile, yes --- but somehow hysterical as well.

One might perceive "21 Jump Street" --- this version --- as strictly for adolescent boys. And yet, for once, I find it satisfyingly entertaining. Call me crazy --- see it for yourself.

"21 Jump Street" is the second major collaboration of directors Phil Lord and Chris Miller (the first was the animated/Golden Globe-nominated "Cloudy with a Chance of Meatballs"), and here they get an opportunity to work with Oscar nominee Jonah Hill and the suddenly hot Channing Tatum. The unlikely pairing of the svelte, well-built Tatum and the round, pudgy Hill works, for the most part, because of the frequently clever writing, but primarily due to the expert comic timing of its two stars.

We first meet Schmidt (Hill) and Jenko (Tatum) in high school, where the former is an intelligent nerd, and the latter is a ladies' man with limited brain power. After graduation, they both end up at the police academy, but without Schmidt to help him, Jenko would not pass the basic requirements. Graduate they do, and of course, they are made partners, but because of a botched arrest, they end up as undercover cops who must infiltrate a drug dealing ring at a local high school. Ice Cube is the captain at the police hideaway at 21 Jump Street.

The main dealer of drugs in the school is Eric Molson (played by James Franco's younger brother, Dave). The funniest scene in the movie, for me, has Schmidt and Jenko high on an edible drug, purchased from Molson, and they are confronted by the school's track coach, Mr. Walters (Rob Riggle).

Equal parts silly and equal parts funny, all things considered, "21 Jump Street" is better than expected. When the two are out on the streets with their official bicycles, they are so bored they play quick draw with their guns. When Schmidt presumes Jenko's gun isn't loaded, Jenko replies, "No, that wouldn't be any fun". There are plenty of one-liners that get lost in the shuffle, so maybe a second helping of the film is in order.

"The Office"'s Ellie Kemper almost steals  the show as Jenko's chemistry teacher, Ms. Griggs. She is a hoot as the innocent-looking, yet hot-blooded, redhead who is instantly attracted to the muscular Jenko.

Hill said on a recent talk show he wouldn't be Oscar-nominated for his role here, and he would be right. But for a decent diversion, "21 Jump Street" is a solid choice.