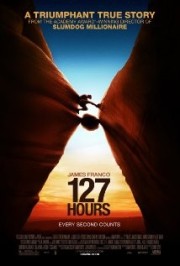 As "127 Hours" begins, we see James Franco as Aron Ralston, flitting around his small apartment, prepping for a solo mountain climbing expedition, this one in the rocky crags of BlueJohnCanyon in Moab, Utah. He places a plastic container under his kitchen tap and momentarily leaves the room. Meanwhile, as the cup overflows and the water spills into the sink, the camera comes in for a close-up. We later realize this was one little moment of foreshadowing, because unbeknownst to Ralston, water would become his most precious possession.

Many moviegoers will recall the incredible true story of Aron Ralston in April of 2003, when he became trapped beneath a boulder, unable to free his pinned right arm, and sustained himself for five days before resorting to the ultimate solution for escape. This well-documented and widely known event became a best seller in the form of Ralston's autobiography "Between A Rock and A Hard Place", and was the impetus for Oscar-winning director Danny Boyle ("Slumdog Millionaire") to make the movie.

"127 Hours" is relentlessly compelling, staggeringly powerful and one of the more difficult films you'll ever sit through. The perfect casting of James Franco to play the carefree, daring Ralston was a stroke of genius. Franco brings such brilliance to the role that he is a shoo-in for an Oscar nomination. And the film itself should be a contender for the top award, as well.

Unlike most films when they end, this is one that stays with you for a long time because of the obvious human connection. Like the people who lived through the plane crash in "Alive", we wonder how we might react in the same situation. And, as has become customary in movies based on real events, "127 Hours" concludes with a brief shot of the real Aron Ralston, along with his wife and infant son.

Many an effective thriller depends on audience anticipation of what's lurking around the corner. We know there may be a demon awaiting our hero, but somehow good usually prevails over evil. In this film, though, the anticipation is one of real dread, because we know the awful truth. Strangely, once we become somewhat inured to the ultimate resolution to Ralston's predicament, the movie takes on a tone of wonder, and it morphs into a deeply emotional story of one man's courage and will to survive, while face to face with his own certain demise.

The movie is careful to detail the level-headedness of Ralston in utilizing the tools of his trade. One of the more useful objects in Ralston's backpack, besides his dull knife, is his camcorder. It helped him to maintain his own sanity by talking to people in his life, especially his parents. Ever pragmatic and self-effacing, Ralston (Franco) at one point peers into the camera and despondently declares "I'm in pretty big doo-doo here". Indeed.