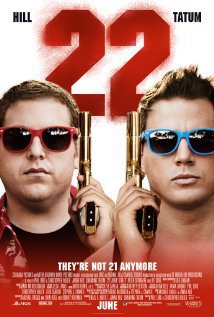 I think one must always approach sequels with much trepidation and not much hope --- that way you won't be disappointed. Such is the case with "22 JumpStreet". "21 Jump Street", which was loosely based on the TV series, was such a huge hit, but that doesn't guarantee that the sequel will match up.

So, despite my illustrious partner's failure to see all of its humor, I think "22 Jump Street" achieves its goal, and is every bit as enjoyable as its predecessor. Because, it doesn't take itself too seriously --- actually, it takes every opportunity to poke fun at itself and the fact that it is a sequel.

Jenko (Channing Tatum) and Schmidt (Jonah Hill) are back in school --- this time it's college at M C State. A new potent drug, WHYPHY, is being sold on campus, and one female student is already dead from using it. Their job is to find the supplier before this drug spreads to college campuses around the country.

Are Schmidt and Jenko silly and absurd? Yes. But the chemistry between Tatum and Hill is undeniable. They matched up perfectly in "21" and here they manage to do it again. Whether they're trying to pull off a drug bust as Hispanic dealers or tripping out after ingesting the new recreational substance in crispy bars, these two numbnuts are so funny together.

I absolutely love that neither Tatum nor Hill has no problem being the brunt of a joke. When it finally dawns on Jenko the identity of Schmidt's new "girlfriend", Maya (Amber Stevens), and a tiny bell goes off, literally --- it's downright hysterical. This newfound info causes Jenko to run around Captain Dickson's (Ice Cube) headquarters, which is shaped like a cube (get it?), having a high old time.

With a story by Michael Bacall and Hill, and the screenplay by Bacall, Oren Uziel and Rodney Rothman, based on the original TV series by Patrick Hasburgh and Stephen J. Cannell, there is a lot of truly laugh-out-loud comedy in "22".

Jillian Bell delivers a "knockout" performance as Mercedes, the deceased's roommate. When she goes toe-to-toe with Schmidt in a hotel room on spring break in Mexico, it's delightfully hilarious.

Since it's been announced that they're not doing another "Jump Street" (who knows?), stay for the closing credits when all of the "upcoming" Jump Street versions are previewed. Just like the film, this is all in good fun and it's very clever. My favorite is "Beauty School" with the two of them in rollers.

Just because I wasn't in stitches watching this sequel doesn't mean the general public won't bust their collective guts at the mayhem provided by Jenko and Schmidt. It's just that I prefer a more subtle approach to humor, and trust me, there is nothing subtle about "22 Jump Street".

Instead of high school, Jenko (Channing Tatum) and Schmidt (Jonah Hill) are undercover cops at M C State, a local college. Their quest? Track down the dealer of the latest recreational high called WHYPHY (pronounced Wi-Fi, not "wifey" as Jenko opines). I don't see any reason to duplicate Jeanne's synopsis further. But let me expound on some of the more amusing elements of "22".

When Schmidt gets into a prolonged fistfight with Mercedes (Jillian Bell), the roommate of his campus sex kitten, Maya (Amber Stevens), they really clock each other in convincing style. (I never thought I would mention "Jonah Hill" and "his sex kitten" in the same sentence). All that's missing are the Batman visual aids of "pow", "sock" and "crunch". The screening audience, of course, went wild.

Honestly, I would rather see more scenes like the one of Schmidt trying to ad lib on stage at a "slam poetry" coffee house event. That was funny, as was his reaction to Captain Dickson's (Ice Cube) big revelation --- not to be spoiled here,  of course. But it is Jenko's frenetic response to said revelation that stands out as the high point of the film.

Tatum, actually, is the funnier of the two stars, at least in this pairing. He has a natural flair for comedy, as evidenced when Jenko struggles to replicate an Hispanic accent during a confrontation of drug dealers. And later, when Dickson mentions to the boys that the police department has a limited budget, Jenko innocently asks, "But I thought we had Cate Blanchett". I'm pretty sure he meant carte blanche.

It's clever writing like that particular line that is not in abundance. Much of "22" relies on physical humor, like Schmidt and Jenko cavorting atop the roof of a semi, or Jenko scaling the outside of buildings, almost Parkour-style, a la "District 13". It's no surprise that the crew included over 70 stunt people.

And, although he looks like a college student as much as any 30-year-old, and as long as they're "atttending" college, Jenko manages to get himself onto the football team as a wide receiver, at the behest of the school's star quarterback, Zook (Wyatt Russell, son of Kurt Russell and Goldie Hawn). Never mind that Zook looks about 27 --- this is a Hollywood comedy. But they form a bond which creates a rift, of sorts, between Schmidt and Jenko.  An amusing session with a therapist, Dr. Murphy (Marc Evan Jackson), does little to heal their disagreement other than to confirm they are heterosexuals.

The humor in "22" does not rely solely on Tatum and Hill. Rob Riggle is back from "21 Jump Street" in an hilarious cameo as Walters, now a jailbird who has undergone a sex change. He shares a cell with Eric (Dave Franco) who is equally funny bemoaning his bad luck, saying he could have gone to Berkeley.

And of course, there are the closing credits which are a must see. So, in my opinion, and since I have "Cate Blanchett" over my critiques, "22 Jump Street", despite my reservations, will do gangbusters at the box office.