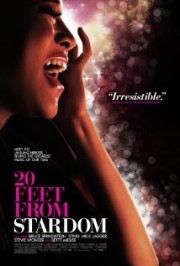 This fantastic glimpse into the lives of background singers, old and new, directed by Morgan Neville, is completely mesmerizing. Beginning with Bruce Springsteen, he opines that it is a "long walk" from behind the lead singer to the front of the stage. Offering many other testimonials regarding the virtues of these sometime unknown singers, "20 Feet From Stardom" is a documentary not to be missed.

For those of us of a certain age, we immediately recognize the songs and the voices, such as Darlene Love and Merry Clayton. Ms. Love was part of The Blossoms, a trio produced by Phil Spector starting in 1962. Though it is Ms. Love and The Blossoms we hear on many records, such as "He's A Rebel", Spector credited The Crystals, and cost Ms. Love a chance at a bigger career as a solo artist.

Clayton had many of the same misfires when trying to establish a singing career on her own. Her varied background vocals include backup for Bobby Darin, Ray Charles, as one of The Raylettes, Neil Young and a duet with Mick Jagger on "Gimme Shelter". Jagger, himself, is on screen talking about Clayton and her amazing talents.

This is one of the most important aspects of "20 Feet From Stardom" --- the appearance of key musical icons, and their joy in celebrating these individuals who contribute so very much to the success of their recordings. It's beautifully accomplished by Neville and there are many touching moments.

The thrust of documentaries is to inform the moviegoer on subjects/people many of us would be unaware of throughout our lives. "20 Feet From Stardom" is a brilliant piece of filmmaking in this arena. I hate to think that such a fascinating topic would have passed me by.

Director Morgan Neville ("American Masters", TV documentaries) has compiled an appealing, often rousing, full-length feature about a long overlooked aspect of the music industry --- the back-up singer. These artists, primarily African-American, performed with lead singers from the 50's and 60's when they started their careers as teenagers. Now they are in their 70's or at least pushing that number.

Names like Lisa Fischer, Merry Clayton, Claudia Lennear and Darlene Love may not be household names, but you've probably heard their fabulous voices. Love, in particular, has been a cog in Bruce Springsteen's E Street Band for the past 20 years, and she has an annual Christmas gig on Letterman. She also was inducted into the Rock 'n Roll Hall of Fame just two years ago.

One of the fascinating aspects of this film is the revelation of the singers' past affiliations. As they are interviewed on film, a small list appears on screen of the famous names with whom they have worked. We're talking GIANTS in the music industry, many of whom appear in the film --- Mick Jagger, Sting, Bette Midler, Stevie Wonder, Springsteen, Elton John, Elvis, Cher, Ray Charles, David Bowie, Luther Vandross --- and on and on.

It is a total pleasure, a rare treat, to listen and watch old footage of these indispensable performers belt out their melodies and harmonies. They are truly pioneers that helped shape the world of music for generations to come.