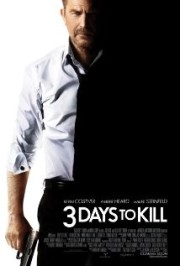 I realize that action-thrillers are not usually known for their Mensa scripts, but "3 Days to Kill" sets a new, all-time low. Luc Besson of "Taken 2" fame (that right there should be a big clue) is responsible for this inane story, as well as the wretched screenplay he co-wrote with Adi Hasak.

Ethan Renner (Kevin Costner) is dying. He's also an old company man for the CIA, who should have retired from field work years ago. But now he has cancer, and in order to get the possible life-saving experimental treatment he needs, he's being blackmailed by super-hot, super agent Vivy Delay (Amber Heard) --- what a STUPID name --- into completing one last job.

Sounds original, huh? Yeah, well, not so much. Oh --- did I mention he has an estranged wife, Christine, whom he calls Tina (Connie Nielsen), and a teenaged daughter, Zoey (Hailee Steinfeld) living in Paris? Well, he does --- and, as luck would have it --- that's where the evil, diabolical terrorist, The Wolf (Richard Sammel), whom he must assassinate, is hiding out. The Wolf --- really? Seriously, I am not making this up. And guess what his faithful lap dog, sidekick is called --- The Albino (Tomas Lemarquis)?

Anyhow, I'm not going to bother to elaborate any further on the plot points. Suffice it to say, a million gun rounds are shot off, and, of course, our hero, Ethan, never gets hit, no matter how many bad guys are in the room. It's all so terribly preposterous.

At one point in the film, The Albino has Ethan on the edge of the Metro tracks with The Wolf screaming "Kill him, kill him!" By then, I wanted to take up the chant myself. But we all know that those things don't happen. The Albino waits too long, of course, and he is the one who goes splat on the subway train.  C'est dommage (French for "that's too bad").

Other than the beautiful shots of Paris (and they are glorious), there is nothing good to say about "3 Days to Kill". Even the ravishing Ms. Heard, now engaged to Mr. Depp, couldn't salvage this debacle.

Kevin Costner has been averaging one movie a year for quite

a while --- until now. In the first four months of 2014, he will have three releases, and I call them the good, the bad and the ugly. I can't talk about the good because it's not coming out until April. The bad, "Jack Ryan: Shadow Recruit", has come and gone. The ugly is "3 Days To Kill".

Ethan Renner (Costner) is a Secret Service Agent dying of cancer, and he's given, at most, five months to live. He's got an estranged wife, Christine (Connie Nielsen) and a teenaged daughter, Zoey (Hailee Steinfeld) living in Paris. He wants to be reunited with his family, so he travels to France to do so, but he's also given an assignment by a CIA operative, Vivy Delay (Amber Heard, terribly miscast -- she's too stunning for this part).

The movie's title is a duplicitous play on words because (1) Vivy has given Ethan a deadline for his job, and (2) Christine leaves town, so Ethan must entertain his daughter, literally killing three days with her.

He must track down and kill a terrorist called The Wolf. Along the way he manages to gun down a few dozen other bad guys, and still find time to get on Zoey's good side.

You like violence? The movie opens with Ethan standing in a doorway with at least five bodies strewn about the place. Why this film didn't get an "R" rating is obvious --- PG-13 guarantees a larger audience. But dead bodies, flying bullets and splattered blood are far less objectionable than sex and nudity to the

Co-writer Luc Besson has put together the shabbiest of scripts. He and fellow scribe Adi Hasak can't decide if this should be a straight crime drama, or a black comedy, so they have attempted both. It doesn't work on any level. How many times can Ethan beg Zoey to ride the bike he bought for her? How can someone summon an elevator to move with the door already open?  This whole film is laughable, which is a shame since Besson wrote the very fine "District  B13" --- but that was ages ago.

Their attempts at poignancy, intertwined with bouts of violence, are cloying, annoying and tedious. Steinfeld has yet to recapture the acting magic she displayed in "True Grit". A few more bad roles and she'll be the M. Knight Shyamalan of Hollywood. Heard tries to be tough, but I think her future lies in comedy. And Costner can be great if the material is worthy. "3 Days to Kill"

is clearly a waste of his talent.