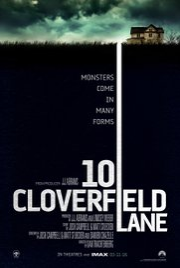 There's nothing quite like a solid thriller to liven up a movie going experience. With superb performances from its trio of actors, "10 Cloverfield Lane" is a stunningly effective mystery/horror/science fiction show that will satisfy even the most skeptical film buff.

Michelle (Mary Elizabeth Winstead), a pretty, 30-something brunette, is driving alone on a dark highway when she receives a cell call from her boyfriend Ben (voice of Bradley Cooper) pleading with her to return after an argument. She ignores his first call, but when he tries again, she looks down distractedly at her phone when suddenly there is an horrific crash. We see her tumbling vehicle --- complete with the most intense sound effects since "It Follows" --- until the car ends up upside down in a ditch. And this just gets us through the opening credits.

Michelle wakes up to find herself chained to a bedpost in a sparse basement. What follows is a cat-and-mouse game involving Michelle, her captor Howard (John Goodman), whose isolated farm house is the setting, and Emmett (John Gallagher Jr.), a young local who has done work for Howard.

To reveal anything further would spoil the surprises of this film. Goodman is perfectly cast as the odd duck who may be just a lunatic, a sociopath, or a guy actually telling the truth about a chemical attack that has killed everyone, and made the air non-sustainable for living creatures. Howard is unpredictable --- nice guy one minute making them all dinner, erupting in a rage the next. It's hard to imagine any actor other than Goodman playing this explosive character.

Winstead is marvelous, exhibiting the right amount of fear, curiosity and even a sense of humor, despite her surroundings. Is she really relegated to this place forever in order to survive, or should she risk an escape attempt? Gallagher --- with his full beard and baseball cap making him virtually unrecognizable from his persona of Alison Pill's boyfriend, Jim, on HBO's "The Newsroom"  --- is especially likeable as Emmett, who forms a special bond with Michelle.

The use of sound in "10 Cloverfield Lane" is shocking and alarming. In fact, Howard's steel door that locks Michelle in her space is a character all its own. Emmy winner Bear McCreary provides the eerie score.

Making his feature film debut, director Dan Trachtenberg, with a screenplay co-written by Damien Chazelle ("Whiplash"), has the audience in his grasp from the opening scene. Just when things seem to settle down as Howard, Michelle and Emmett relax with a quiet board game, the movie morphs into a nerve-jangling suspense yarn in seconds flat. And to add more credibility to this effort, J.J. Abrams is one of the film's producers.

The tagline for "10 Cloverfield Lane" is that "monsters come in many forms". This is a foreshadowing to the movie's startling finale, one that borrows a bit from a classic sci-fi tale of 40 years ago. This is escapist entertainment that will stay with you long after you leave the theater.