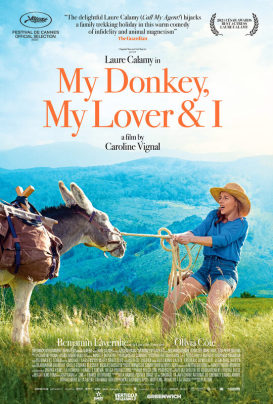 I love summer blockbusters as much as the next critic, but what I truly live for are the small films, not usually made in the United States, which provide so much joy and entertainment. Such is the case with MY DONKEY, MY LOVER & I.

Originally entitled ANTOINETTE IN THE CÉVENNES and inspired by Robert Louis Stevenson’s 1878 classic “Travels with a Donkey in the Cévennes”, writer/director Caroline Vignal had the brilliant idea of switching the protagonist to a female --- and the donkey to a male. Antoinette, played with marvelous verve by French actress Laure Calamy in her first leading role, follows her lover, Vladimir (Benjamin Lavernhe), on a hiking vacation in the Cévennes National Park in France.

Poor Antoinette, a primary schoolteacher, is supposed to be going on vacation with Vladimir, the married father of one of her students. At the last minute, his wife, Eléonore (Olivia Côte), has booked a hiking trip as a surprise for their daughter. Without thinking it through, Antoinette decides to follow them to the same region of Cévennes.

There she meets her traveling partner, a donkey named Patrick. With no clue as to what she’s in for, Antoinette sets out on the same trails --- alone --- with only Patrick for company. As she walks --- and talks --- her way through the mountains, meeting fellow hikers --- and bikers --- along the way, Antoinette begins to appreciate her strengths and the realization that she can be fiercely independent.

Honestly, MY DONKEY, MY LOVER & I is just the sweetest, most wonderful film. Calamy is absolute perfection as this slightly daffy woman searching for fulfillment in the wrong relationship. And her interactions with Patrick are both hilarious and poignant.

I have been telling David for years that I want a donkey, and now, after watching MY DONKEY, MY LOVER & I, I really want one. At first, Patrick is not completely cooperative, causing much consternation for Antoinette. He doesn’t seem to be that crazy about her --- or hiking for that matter --- but eventually the two bond. Boy, do they connect --- it’s incredibly heartwarming.

Vignal and her crew used two different donkeys to play Patrick, one they had to slim down and the other had to be fattened. There was even some professional coloring involved, but in the end, no one could tell them apart. And Calamy reveled in her time with Patrick.

Along with Antoinette and her donkey, a third presence makes itself known. The beauty and majesty of the Cévennes becomes another character in MY DONKEY, MY LOVER & I. Cinematographer Simon Beaufils captures the exquisite magnificence of the region with breathtaking shots of the incredible vistas. It’s completely understandable that Stevenson fell in love with the area and penned his travelogue. It’s a journey I’d love to take, donkey et al.

If donkeys aren’t the sweetest animals on Earth, they’re close. Jeanne has always coveted a donkey for her own --- her synonymous nickname for me notwithstanding --- and I personally photographed a donkey on Mykonos many years ago nosing his way into a bakery, attracted by the aroma. So, when MY DONKEY, MY LOVER & I became available to review, we eagerly gave it a go.

It's hard to decide who the star is in this small film. Patrick the donkey is actually played by two similar looking ones, a prototypical stubborn one who refuses to move and a second more energetic one. Either way, it’s hard not to fall in love with Patrick. But equally appealing is Laure Calamy as Antoinette in a charming and funny performance that won her a César, the French version of Oscar.

Calamy is quite adorable as the elementary school teacher who surprises her lover, Vladimir (Benjamin Lavernhe), when she travels to the Cévennes National Park in France to hike the same trail he is traversing with his wife, Eléonore (Olivia Côte). Of course, the intrigue about what will transpire once they all meet is what drives the film.

Director Caroline Vignal wrote the script based on her own experience years earlier in this region --- sans the lover part. Calamy was her first choice to play Antoinette, having seen her on “Call My Agent” on French television, and it is Calamy’s first leading role.

Antoinette’s interactions with people she meets on the trail and with Patrick are supremely entertaining. Author Robert Louis Stevenson hiked the same trail at the age of 28 before he became a famous writer, and his description of his trip, also with a donkey, has inspired hikers ever since. At a crisp 97 minutes MY DONKEY, MY LOVER & I is thoroughly entertaining.