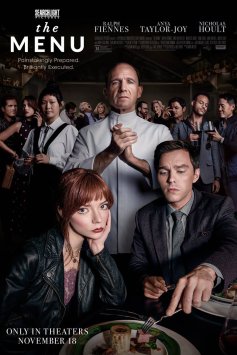 The always first-rate Ralph Fiennes stars as Julian Slowik, a world-renowned chef who runs an obsessively tight ship at the very private and chic restaurant, Hawthorn, located on a remote coastal island in the Pacific Northwest. With a screenplay written by Seth Reiss and Will Tracy and directed by Mark Mylod, THE MENU is a taut thriller --- some may say horror film --- with a good dose of dark humor.

Obnoxious foodie, Tyler (Nicholas Hoult), and his date, Margot (Anya Taylor-Joy), are two of the eleven guests scheduled for a sumptuous tasting menu prepared by Slowik and his exceptional staff.  Tyler is so jazzed about finally being able to partake in Slowik’s culinary delights that he berates Margot for smoking even before they’ve boarded the boat which will take all the participants to the island. He’s convinced smoking will affect her taste buds.

Upon arrival, the diners are met by Slowik’s “general”, Elsa (Hong Chau), who takes them on a tour of the surrounding grounds, then to Hawthorn itself. As the dinner presentation begins it quickly becomes apparent that Slowik has designed the evening --- and the menu --- to expose the many secrets behind each and every

It would be a grave sin to give anything away, so suffice to say THE MENU is as shocking and titillating as any movie in recent memory. And despite some of its luridness, Reiss and Tracy’s script is at once as hilarious as it is horrifying. As Slowik’s intentions become clearer, the satire ratches up, especially when it’s finally revealed how much the pompous chef loathes his even more imperious clientele.

While THE MENU is certainly provocative --- and electrifying --- it is Fiennes’ performance that keeps the audience spellbound. He’s simply off the charts in his portrayal of this maniacal elitist who finds himself caught in his own web. It’s a gloriously devilish execution by Fiennes, a master of his craft.

Hoult and Taylor-Joy are equally adept at dramatizing their roles. At first, we assume that they are a couple, but as the evening progresses that assumption is proven to be categorically incorrect. Hoult plays the nerdy foodie to perfection, so annoying even I wanted to strangle him. And Taylor-Joy’s Margot is a constant distraction for the vengeful culinary artist. She’s delightfully cunning and wickedly unapologetic for her professional choices.

The rest of the cast includes Janet McTeer as the famous --- and cruel --- restaurant critic, Lillian Bloom, who is sharing her experience with her magazine editor, Ted (Paul Adelstein). Judith Light and Reed Birney play an older, very wealthy couple, Anne and Richard, who have been to Hawthorn 11 times already --- but can’t remember the name of a single course.

There is also a middle-aged film star (John Leguizamo) who brings along his young assistant, Felicity (Aimee Carrero), who just wants to quit her job. And lastly, three drunk techies, Bryce (Rob Yang), Sorea (Arturo Castro) and Dave (Mark St. Cyr), who are beyond offensive, round out the dining group. It’s a terrific ensemble, complemented by Slowik’s ever-faithful kitchen staff.

THE MENU is definitely not for everyone, but if a dark comedy/horror film sounds enticing, then don’t miss it. And at 107 minutes, it’s a breeze.

Sometimes it’s better to go into a film without any knowledge of its premise, its buzz or even its cast. Such was the case for me with THE MENU. Because the movie is replete with unexpected twists and turns of events, I sat through our screening --- fists clenched --- trying to soak it all up. It’s easily worth a second viewing although the more stunning surprises would likely be somewhat uncomfortable expectations.

THE MENU may morph into a cult favorite or a satirical take on fine dining --- which it is, in part --- or a chastisement of uber-wealthy/connected individuals --- or all three. One thing is certain, it is a film that people will be talking about for a long time, telling their cinephile friends it’s a must see. Billed as a comedy/horror/thriller, THE MENU succeeds on all three levels, although I believe it’s more of a horror/thriller than a dark comedy, despite what Jeanne says.

With a cast headed by Ralph Fiennes, Anya Taylor-Joy and Nicholas Hoult, and directed by Mark Mylod who has various awards for “Succession” and “Game of Thrones”, the movie is fully pedigreed in front of and behind the camera. Other cast members include stars of stage, screen and television like Janet McTeer, Reed Birney, Judith Light and John Leguizamo.

One lesser-known actor almost steals the show. Her name is Hong Chau, best known for her role in DOWNSIZING. In THE MENU we first meet her character, Elsa, as she greets guests arriving by boat to a remote island in the Pacific Northwest.  They are anticipating a regal dinner at a restaurant named Hawthorn, concocted by its renowned chef Julian Slowik (Fiennes). But Elsa’s demeanor toward the guests is a bit shocking.  She is curt to the point of being rude and her behavior is the opposite of what one might expect. What we don’t realize at the time is that Elsa is the least of the guests’ problems.

As for Fiennes, we have seen him portray the face of evil before in SCHINDLER’S LIST when he played a Nazi concentration camp officer. In THE MENU his character’s villainy is much more subtle. Here Chef Slowik even exhibits a sense of humor. Fiennes is perfectly cast, and ohhh, that clap to get his kitchen staff’s attention!

Hoult plays Tyler, a foodie who doesn’t know as much about the culinary arts as he thinks. He arrives with Margot (Taylor-Joy) on his arm, but we learn that she is substituting for another female that jilted Tyler --- and single guest tables at Hawthorn are not allowed. Hoult and Taylor-Joy are two of the most sought-after young actors of their generation and they show why in THE MENU. We hang on every word they utter.

Deserving accolades must go to the tandem of writers who conceived this story. They are Seth Reiss (“Late Night with Seth Meyers”, The Onion) and Will Tracy (“Last Week Tonight with John Oliver”, “Succession” and The Onion). Part of their task was to imbue Fienne’s character with a tinge of insanity yet make him credible at his craft. The events that evolve in THE MENU border on the absurd, yet Reiss and Tracy make their script just believable enough.

Mylod and his staff went to great lengths to arrive at total authenticity for a fine-dining establishment. They brought in Michelin chefs and other culinary experts and the result is dishes that look spectacular even if they don’t necessarily please the palette of Margot. After all, she only craves a cheeseburger.

THE MENU is one of those completely original ideas that will sneak up on unsuspecting viewers. The movie drips with anticipation of what will occur next. One great compliment to its overall production value is this --- it’s impossible to be bored.