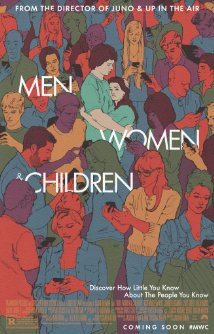 Based on the novel of the same name by Chad Kultgen, Jason Reitman directed and co-wrote the screenplay with Erin Cressida Wilson. Reitman, who directed "Juno", "Up in the Air" and "Young Adult", to name a few, is a huge fan of Kultgen's, and managed to read this book while still in galley form. He quickly decided it needed to be made into a film. I have to disagree with his assessment.

"Men, Women and Children" tries, in vain, to make profound statements about teenagers, their parents, today's technology and sex. It fails miserably at every turn.

There is nothing new here --- no startling revelations. It's been done before --- on TV --- and better. The ensemble cast is uninspired, and the characters are cheesy and predictable. I am woefully exhausted by overbearing parents, unhappy marriages, children of divorce and anorexia.

Jennifer Garner plays Patricia Beltmeyer, the helicopter mom, whose daughter Brandy (Kaitlyn Dever) can do NOTHING or talk to NO ONE. On the flip side of that, Judy Greer is Donna Clint, a divorcee with a hot teenage daughter, Hannah (Olivia Crocicchia), whom she photographs in skimpy outfits --- then sells them on an internet website.

Now --- mind you --- all of these misfits reside in the same small town somewhere in Texas, and the kids all go to the same high school. Good Lord, if there really are this many dysfunctional families out there in one tiny area, we are doomed as a society.

There are a few cast standouts. Elena Kampouris stars as Allison Doss, the anorexic cheerleader who suffers from low self-esteem, and has a crush on the most popular football player. Again, this is nothing we haven't seen before, but Kampouris is by far the most interesting young actor on screen, and does the most with the little she is given in this wretched script.

What really bothers me is that the film never truly addresses her anorexia head-on. After Allison ends up in the hospital following a serious episode at school, nothing is said --- or even mentioned --- about helping her. And worse, she ends up wandering the streets at 1:00 a.m. --- alone --- after her father, played by J.K. Simmons, goes ballistic at the hospital. This is a major storyline flaw. Any concerned parent, and she has two, would be monitoring her a tad more closely.

Even Ansel Elgort, who was so good in "The Fault in Our Stars" can't save his role here. It's egregious how flimsy these characters have been developed. Though, I must admit, Adam Sandler is a complete surprise. For once, he's not all about bathroom humor --- but that's because he didn't write the screenplay.

"Men, Women and Children" is a huge disappointment. When using the sublime Emma Thompson as the narrator doesn't help, there is nothing more to write.

For whatever reason, director Jason Reitman has not had a hit since 2009's "Up in the Air" starring George Clooney. "Young Adult" (2011) was a waste of Charlize Theron's talent and "Labor Day" (2013) was an embarrassment for Josh Brolin and Kate Winslet. His latest release, which he co-wrote, is no better.

Two main sub-plots have a high school football standout (Ansel Elgort) quitting the team against his overbearing father's (Dean Norris) wishes, and another high school girl (Kaitlyn Dever) sneaking around on her overly protective mother (Jennifer Garner) so she can be with said ex-football player. Ironically, it's Dever's character who requires the least amount of parental supervision.

With such a variety of potentially serious subjects, this would have to be a three-part project to do them justice. Instead, what Reitman has delivered are merely superficial treatments. We don't really care about any of the characters, an essential element for this kind of movie to succeed.

Reitman's growing legacy of wasting talent is evident again. Elgort is a new young star on the rise --- he was terrific in "The Fault in Our Stars" --- but here, despite  his efforts, his character is flat and one-dimensional. Amazingly, the only actor who gives a semi-meaningful performance is Sandler. Playing it straight, it's a welcome relief from his usual hi-jinks.