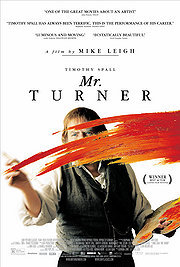 One of the most beautifully filmed movies of recent memory, Mike Leigh's ("Secrets & Lies", "Vera Drake") masterpiece about J.M.W. Turner, the British painter (1775-1851) best known for his muted palette, and eccentric ways, garnered a Best Actor win for Timothy Spall at the Cannes Film Festival this past May. Spall's portrayal of the equally fascinating and infuriating Turner is a crowning achievement in a long and tremendously varied career.

"Mr. Turner" focuses on the last quarter century of Turner's life. Written and directed by Leigh, his exploration acquaints us with this wildly prolific painter who is shunned by Queen Victoria and Prince Albert. He is devoted to his dear father, William Turner (Paul Jesson) and adored quietly by his ever-faithful housekeeper, Hannah Danby (Dorothy Atkinson).

Turner travels extensively and often, eventually leaving behind his studio in London and settling in Margate with Sophia Booth (Marion Bailey), a widow. She's the calming force in this otherwise petulant man's strident life. Turner isn't always a very nice or gentle man, but when with Sophia, a better side of him is visible.

Leigh's crew on "Mr. Turner" is marvelous. Dick Pope is responsible for the breathtaking cinematography, utilizing soft and muted colorings to the fullest extent. It's a gorgeous film, and also equally of value are the costumes designed by Jacqueline Durran, and the production and set designs by Suzie Davies. A period piece such as "Mr. Turner" would be incomplete without these components.

But, despite these magical touches, the most important aspect of any film is the script --- and Leigh has penned an impressive introspective worthy of such a talent. Turner was a painting genius, willing to do most anything to enhance his art --- like having himself strapped to the mast of a ship so he could get the full effect of a stormy sea. Leigh's screenplay is devoid of meaningless banter, but brimming with consequential glances and purposeful dialogue.

And all of the best writing would not make "Mr. Turner" the rare film it is without the performances of Spall and company. Spall has been an elite actor for many years --- one that you may recognize, but not know his name. His portrayal here sets him apart,. and provides him with the vehicle possible to win many awards, including an Oscar.

He is formidable and spirited playing the bizarre and unconventional artist, who was slighted by many who did not appreciate his unusual art. I loved him at his most tender with his father --- a man who supported him unconditionally, and whose death affected him greatly. Spall is exceptional --- a tour-de-force in a sublime, queer way.

The most impressive achievement, however, in "Mr. Turner", comes from Atkinson. She is silently amazing --- never speaking much, but offering all of Hannah's emotions by the tilt of her head, or the expression on her face. I was totally mesmerized by her sad, pathetic self. And when poor Hannah finally finds Turner living with Sophia in Margate, it is beyond heartbreaking.

"Mr. Turner" is not a film for the masses. It is rather slow in pace, but arguably one of the best-written, and most handsomely filmed movies this year. I cannot recommend it enough!

Timothy Spall is a British character actor whom many moviegoers will recognize as Wormtail from "Harry Potter", or perhaps a film they cannot exactly recall. The fact is he has well over 100 television and movie roles to his credit, but nothing like his performance as J. M. W. Turner, a landscape artist who died at age 76 in 1851.

"Mr. Turner" is a fascinating character-driven film, with superb performances from Spall and the entire cast. Director Mike Leigh, a frequent collaborator with Spall,  specializes in this kind of movie ("Vera Drake"), with exceptional cinematography and music. To hold audience interest  for 150 minutes with virtually no action sequences speaks volumes.

Spall literally grunts his way through this film, his first leading man role, and he did so all the way to a Best Actor prize at Cannes this year. Turner is not necessarily a nice man --- he uses his housekeeper of over 40 years, Hannah (Dorothy Atkinson in a quietly memorable turn), for sex --- but he's quite a likeable character, nevertheless. His relationship with his father, William (Paul Jesson) is touching, and his unexpected courtship of the widow Sophia Booth (Marion Bailey) is especially poignant.

Turner has edgy relationships with his fellow artists, many of whom simply don't like him. He demonstrates his unconventional modus operandi in one very amusing scene, in particular. He apparently vandalizes one of his hanging oil paintings with a small daub of red, much to the bewilderment of other artists in the area, only to return moments later to complete his "smear" into a buoy.

Timothy Spall was born to play characters in any century preceding the 20th. "Mr. Turner" is his fifth collaboration with Leigh, a director noted for inducing prize-worthy performances from his cast. Distinguished British actors that have worked under Leigh's direction, and received various accolades for their work, include the likes of Brenda Blethyn, Eddie Marsan, Imelda Staunton, Sally Hawkins, Lesley Manville and Jim Broadbent.