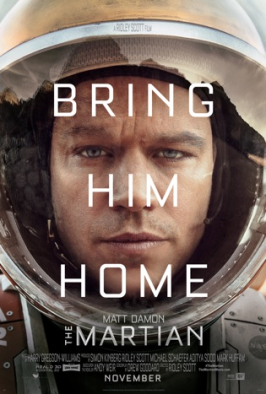 From director Ridley Scott, "The Martian" is a sci-fi adventure about the harrowing experience of being left behind on Mars. Starring Matt Damon as Astronaut Mark Watney, who is injured in a violent sandstorm on the planet, and presumed dead, the rest of the crew makes a life-and-death decision to leave his body and skedaddle.

Only Mark is not dead, and when he awakens and assesses his predicament, he must race into action before his food supply runs out. In the interim, NASA and scientists from all over the world, including China, come together to strategize a plan which can bring Mark home.

Based on an original novel by Andy Weir, a computer programmer, screenwriter Drew Goddard was able to  capture all of the intensity, beauty and humor in Weir's imagination with his superb screenplay. It helps tremendously to have Damon as the main character --- his ability to portray Mark is unparalleled, especially when interjecting the humor.

The list of actors mentioned above reads like a list of Who's Who in Hollywood --- and they all brought their A-game. Daniels, my favorite, appears much  like he did on the brilliant but unwatched "The Newsroom" on HBO. His arrogant composure when he's finalizing decisions about Mark's future is inspiring. Ejiofor is the other standout, perfectly cast in a refreshing departure from his role in "12 Years a Slave".

Scott has directed a phenomenal film --- one that will be a real crowd-pleaser. It's impossible for it not to be --- the adventure is intense, frightening and coming so close to being a reality.

But he does not do this alone. His crew is foremost in their respective fields, with Dariusz Wolsky as director of photography, Arthur Max, production designer, and fabulous editing by Pietro Scalia. Add to this mix the gorgeous soundtrack by Harry Gregson-Williams, and "The Martian" is hard to beat at the box office.

Mankind, and science fiction buffs in particular, have always been obsessed with Mars. Of the heavenly bodies in our solar system, it is Mars that has engendered the most imagination and fascination, whether in film or literature. In Ridley Scott's epic new movie, "The Martian", we believe that man has, indeed, walked on the red planet.

Mark Watney (Matt Damon) is an astronaut/botanist/mechanical engineer on a mission to Mars with a crew led by Commander Melissa Lewis (Jessica Chastain), which also includes Rick Martinez (Michael Pena) and Beth Johanssen (Kate Mara), among others. When a violent storm hits, the astronauts on the ground scramble to re-enter their spacecraft, but Watney is injured and presumed dead. Cmdr. Lewis makes the decision to abandon Mars and head home, a journey that will last many months.

But of course Watney is very much alive, and stays that way thanks to some emergency self-surgery. In a grueling opening sequence, he must staple his stomach together to avoid bleeding to death after being impaled by a sharp object. Things get even more dire when Watney realizes he has insufficient food and water to last for very long, and especially so when he acknowledges he has no means of communication to let anybody know he has survived the storm.

Damon is phenomenal as the stranded astronaut who is practical about his dilemma, recognizing that he'll be memorialized as the only human to ever be on a planet completely alone. "Take that, Neill Armstrong", he says. His character's sense of humor, amidst the potential doom-and-gloom, is a big reason why we care about him.

We watch in rapt attention as he figures out how to actually make water so he can grow the potatoes he has planted. When a surprise explosion rips through his surroundings, his resourcefulness at repairing his environment is intriguing. And when he ultimately finds a way to talk to NASA (excellent performances all around from Jeff Daniels, Chiwetel Ejiofor, Donald Glover, Sean Bean and Kristen Wiig, in another dramatic turn) it is an emotionally satisfying turn of events. But that is only half the battle. The eventual rescue attempt to reunite Watney with his crew is a pulsating thrill ride in outer space.

Chastain is a strong presence as the distraught mission leader who must approach her crew with a difficult decision. Return to Mars for a near-impossible rescue attempt, thereby extending their time away from home and family even longer, or continue their flight back to Earth, thus condemning their fellow astronaut and friend to certain death. Chastain proves yet again she can handle the role of a woman in charge, but under extreme pressure to do the right thing.

With incredibly realistic set designs, costuming, and a visual effects crew numbering almost 300, "The Martian" works on many levels. Screenwriter Drew Goddard, an Emmy nominee for TV's "Lost", based his script on the book by Andy Weir.

In a glowing career, "The Martian" may be the 77-year-old Scott's crowning achievement. Fans of his "Blade Runner" may be skeptical, but this is a terrific production. It's a film that makes "Gravity" look like a junior high science fair project. Call it "Saving Private Ryan" meets "Cast Away" --- except that astronaut Mark Watney doesn't have a volleyball for