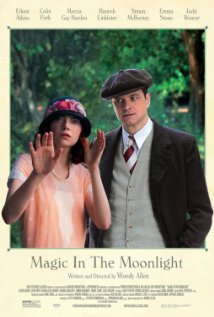 No matter what your opinion of Woody Allen is as a human being, as a filmmaker, he is without a doubt one of the most talented to ever grace the silver screen. His latest effort, "Magic in the Moonlight" definitely adds to his stalwart reputation of writing and directing romantic comedies.

Allen makes a habit of working with the most talented actors. Last year's "Blue Jasmine" won a Best Actress Oscar for Cate Blanchett. Though that role was a tad more demanding, "Magic in the Moonlight" is lighter fare, much like "Midnight in Paris".

Starring Colin Firth as Stanley Crawford, whose alter-ego Wei Ling Soo is a world-renowned magician, he is called upon by his best childhood chum Howard Burkan (Simon McBurney) to debunk a clairvoyant named Sophie (Emma Stone). She is currently staying at the Cote d'Azur estate of an American widow, Grace Catledge (Jackie Weaver), with her mother Mrs. Baker (Marcia Gay Harden). Grace's son Brice (Hamish Linklater) has become quite besotted with Sophie, and intends to marry her.

No one can play the upper crust, snooty Brit better than Firth. He is divine, and he looks divine in very scene. Stanley is at once intrigued and appalled by Sophie, but as things progress, he cannot prove, much to his chagrin, that she is a fake. And with every moment he spends with Sophie, he finds himself drawn to her newness and freshness. But it is his beloved Aunt Vanessa (Eileen Atkins) who leads him, in a very endearing sequence, to the path of enlightenment.

What I love about Allen is his perspicacious style. His scripts are almost always wonderful, along with the actors he has chosen, but it is the cinematography, sets and costumes that complete his films.

Obviously, the south of France provides an incredible, breathtaking backdrop for a movie depicting life among the wealthy in the art deco period of the 1920's. Two different villas in Cap d' Antibes and Mouans-Sartoux were used for the Catledge residence, along with several other locations for the bars and hotels.

Production designer Anne Seibel and costume designer Sonia Grande performed miracles within "Magic in the Moonlight", especially in creating the ball scene set in Cap d' Antibes. Most of the costumes are originals, and the effect is overwhelmingly stunning. Without the elaborateness of the most recent "The Great Gatsby", the beauty of this party is not lost on the audience.

I was rather disappointed when I learned that Stone was starring opposite Firth as Sophie. I have never been terribly impressed by her as an actress. But I must admit I grew to love her as the spirited medium who wins Stanley's heart. Stone is totally beguiling, and this is her best performance to date.

Director of Photography Darius Khondji, who also worked with Allen on "Midnight in Paris" and "To Rome With Love", has given "Magic in the Moonlight" a truly magical look. He utilized the old Cinemascope lens, giving the film a softer, more pleasing look. The results are gorgeous.

"Magic in the Moonlight" may not be as commercially successful as "Blue Jasmine", or even "Midnight in Paris", but it's a charming foray into the popularity of spiritual mediums and seances in the 1920's, something which is of great interest to Allen. I found it utterly engaging --- I loved it!

Some of Woody Allen's best films are those which he directs, but doesn't appear in himself. "Match Point" comes to mind --- now we have "Magic in the Moonlight". I was skeptical about the odd romantic pairing of Emma Stone and Colin Firth --- after all, he's more than twice her age (53 versus 25) --- but considering Woody's own personal history with a younger woman, it's not so strange.

As it turns out, their on-screen relationship, and the movie, are terrific. Allen is a marvel at re-creating bygone eras. His attention to detail, whether it's the music of the period, the motor cars, the garb --- they all play a part in making his films come alive. Initially set in 1928 Berlin, and later in the south of France, "Magic in the Moonlight" is short and sweet, charming and totally satisfying.

Stanley Crawford (Firth) is a traveling illusionist, performing magic to adoring audiences. With the Chinese moniker Wei Ling Soo, and make-up to match, his on-stage popularity is offset by his pompous and rude treatment of his assistants, and everyone else around him. He is a self-described misanthrope whose glass is always half-empty. Despite his personality, however, he is quite amusing and likeable, thanks to a deft script by Allen.

Stanley soon learns, from an old magician friend, Howard (Simon McBurney), of a young psychic medium named Sophie Baker (Stone) who allegedly tells people about themselves with no prior knowledge, holds seances to contact the dead, etc. They travel to France to meet Sophie at the Catledge mansion, owned by the mother, Grace (Jackie Weaver) and her son Brice (Hamish Linklater).  Stanley's Aunt Vanessa (the wonderful Eileen Atkins), is also staying there, but it is Stanley's sole intention to discredit Sophie as a fraud, part of his life's work.

When Sophie reveals facts about Vanessa she couldn't possibly know, Stanley is convinced of her abilities, and although he is engaged to another woman, a part of him is falling for Sophie. Meanwhile, she is being pursued by the much younger, uber-wealthy Brice, to be his bride.

Firth again shows what he can do with a smart script. He is a consummate performer who never misses a beat. He literally dissolves into whatever role he is playing, further cementing his deserved status among Oscar-winning actors. Stone is quite effective as the young mystic, and she can look very attractive, as she does in the main party scene in this film.

Atkins almost steals the show as Aunt Vanessa. She is the catalyst for Stanley to

follow his heart. and is the voice of reason. "Magic in the Moonlight" is richly entertaining thanks to the entire ensemble cast, and Allen's consummate skills as both writer and director. Most importantly, its two leading stars prove to be a delightful, and believable, match.