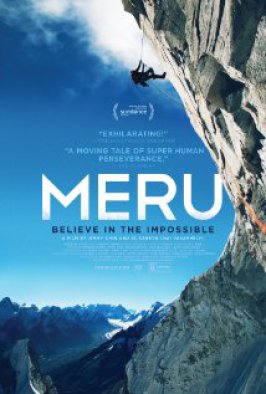 Outside of having to make a five foot putt to win The Masters, I can't think of anything more terrifying than scaling a mountain that's 12 times higher than Chicago's Willis Tower. With temperatures plummeting to 20 degrees below zero, three world-class climbers attempted to reach the summit of a peak that no one before them had done. It's all captured in "Meru", a stunning documentary named after the elusive mountain which soars above the Ganges River in India.

Their first attempt came in 2008. World-renowned alpinist Conrad Anker called on his long-time climbing mate Jimmy Chin, along with Renan Ozturk, to tackle what's called the Shark's Fin on Mount Meru. Expertly using the tools at their disposal, we are fortunate to get first-hand looks at the obstacles a climber must face. And when Mother Nature gets into the act, things can get even more precarious.

At one point in this initial try, the men were assaulted by a vicious storm which marooned the trio for four days in their mountain-side tent. Being virtually inside their cramped quarters as they eat, smoke and try to sleep is a wonder in itself. Meanwhile, with their food supply dwindling and still 90% of the climb left to achieve, their effort eventually had to be abandoned.

Once in his career, Chin found himself caught in a horrific avalanche which he miraculously survived. As retold in the film, Anker's closest friend and climbing partner, Alex Lowe, was not so lucky in an earlier incident in which Anker came out alive. And Ozturk was later victimized in a brutal fall while skiing in Wyoming that left him near dead, let alone ready to challenge Meru a second time.

But challenging it again was a foregone conclusion with these three daredevils. The resulting documentary, filmed by Chin and Ozturk themselves, is spectacular, and demands to be seen on the big screen.

Their shots from various angles and heights of this majestic mountain are jaw-dropping and vertigo-inducing. And their nonchalance while perched on sheer slabs of granite thousands of feet in the air is astonishing.

The film's combination of post-climb interviews and real-time footage provides the moviegoer with a unique perspective of these men. In a mere 90 minutes, we get to know them on a strangely personal level that other documentaries rarely achieve.

Chin also co-directed the movie with his wife, Elizabeth Chai Vasarhelyi. Says Chin: " I always say the rules of filming on a mountain climb are fairly straightforward. Shoot whenever you can. Don’t hold up the team. And don’t drop the camera". Chin is also one of the few skiers to traverse Mount Everest from the summit.

In a year already filled with superb documentaries, "Meru" is sure to stand out among the best. This is one film where mere words can't do it justice.