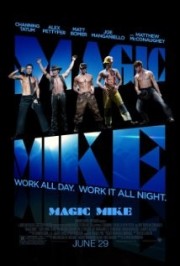 This update on the sordid world of male strippers doesn't offer much in the way of an earth-shattering revelation, but it sure does provide some very enticing eye candy for the ladies. Granted, guys, you may not find this film very entertaining, but as a wise, older male film critic (not David) told me --- "this movie wasn't made for my enjoyment".

Mike (Channing Tatum) is a jack-of-all-trades, but what he really wants to be is an entrepreneur. He builds furniture in his spare time from items found on the beach, in the trash, etc. He also works construction as a roofer. But his most lucrative employment is the headliner of a male strip club in Tampa. He works very hard and saves all of his money in hopes of starting his own small business.

Along comes a college dropout named Adam (Alex Pettyfer), whom Mike takes under his wing at the behest of Adam's older sister Brooke (Cody Horn). Mike and his boss, the club owner Dallas (Matthew McConaughey), see a raw potential in Adam --- and lo and behold --- he's sent out onto the stage to perform. Unfortunately, he gets sucked into the worst part of this life --- the drinking, drugs, sex --- and ends up costing Mike his life savings.

The fact that this sophomoric tale is directed by Steven Soderbergh is shocking. Yes, it starts off as fun, but the script by Reid Carolin quickly dissolves into a predictable mess of stupidity. Magic Mike can't find the right girl. His bed buddy, Joanna (Olivia Munn), grows tired of him --- and Brooke is non-committal. It's the same old story --- goodness, does no one have an original though anymore?

The best part of "Magic Mike" is the dancing. It's especially entertaining watching Tatum, McConaughey, Adam Rodriguez as Tito, Matt Bomer as Ken and Joe Manganiello as Big Dick Ritchie work their "magic" on the stage. I know for a fact that David wasn't thrilled by any of their talents, but hey --- who cares?

This is one of those films that could have been so much better had not Carolin taken the easy way out with the story. It's maddening to see the talents of Tatum, who is actually a good actor, and McConaughey so under-utilized. Pettyfer is acceptable as Adam, but again, not a big stretch here for any actor. And virtually everyone else in the cast is given little or nothing to do --- a sheer waste.

"Magic Mike" is acceptable for a "girls' night out" if you're bored with nothing better to do. Or, do what the women in the movie do --- go find a real male strip club --- and lose the inane drama.

I expected more from director Steven Soderbergh. The man behind the camera of such classics as "Traffic" and "Erin Brockovich", and more recently, solid films like "Contagion" and "Haywire", seems to have taken a light-hearted approach to the world of male strippers. "Magic Mike" has plenty in the way of muscled, no-fat, handsome male dancers --- none more so than 42-year-old Matthew McConaughey --- but falls short in character development amid a weak plot wherein the title character (Channing Tatum) has a life crisis about his career choices.

Joanna appears several more times, briefly, with the primary purpose of rejecting Mike's earnest approaches to see her on a more serious level. The message seems to be that, although you might be a chick magnet when you're on stage flexing your pecs and other physical attributes, it loses its luster in the real world of boy/girl relationships. But worry not for Mike, because he introduces a young, unpolished stud named Adam (Alex Pettyfer) into his world, and Adam happens to have a cute sister, Brooke (Cody Horn, who in real life is the daughter of Warner Bros. President & COO Alan F. Horn).

Of course, Mike is smitten with Brooke, and they actually have a reasonably interesting on-screen relationship. She doesn't approve of his lifestyle and isn't thrilled with Adam opting to join Mike and the other dancers under the tutelage of their charismatic leader, Dallas (McConaughey). But Adam has been a drifter for most of his tender years, so when Dallas announces to his boys that Miami is beckoning with a grand opportunity for all of them to share the wealth, Adam sees riches in his future. In fact, he barely blanches when he loses drugs he thinks are worth $1000, earmarked for street sale, except their value is 10 times that.

But the main attraction here, at least for the distaff side, is the dancing. There are several choreographed numbers the boys perform, complete with props like black umbrellas and the requisite silk thongs. McConaughey, like Tom Cruise in "Rock of Ages", is not satisfied with mere six-pack abs, he displays a whole case of them. As Jeanne said to me recently, "What does this guy eat?". Not milk shakes and bon-bons, for sure. But sweaty male bodies aside, even the perfectly formed ones, do not an entertaining movie make.