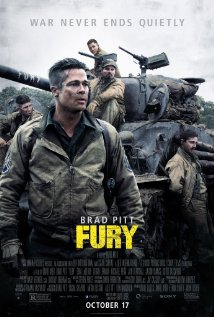 Brad Pitt has an undeniable screen presence. Like matinees idols who have come before him, Errol Flynn, Cary Grant or Tyrone Power, Pitt has that certain je ne sais quoi that transcends into movie stardom. Thus, the films he chooses benefit from his striking persona, and in "Fury" he's onscreen in almost every scene.

In 1945 World War II, the Allies were pushing hard against the Germans on all fronts. In Germany, a Sherman tank, nicknamed Fury, is commandeered by a battle-fatigued army sergeant named Don Collier or "Wardaddy" (Pitt). He and his crew, Boyd Swan (Shia LaBeouf), Trini Garcia (Michael Pena), Grady Travis (Jon Bernthal) and newly-assigned Norman Ellison (Logan Lerman) are being sent behind enemy lines to save a hospital unit from being annihilated by the Nazis. Ellison is as green as they come, which concerns Wardaddy immensely.

Written and directed by David Ayer ("End of Watch", 2012), "Fury" is an astonishingly detailed production about the realities of war. It is graphically generous in its portrayal of death on the battlefield --- a sickening reminder of what young men everywhere had to endure during this epic war.

Ayer's brilliance in casting truly makes a statement in "Fury". These five male stars fit together beautifully, with Pitt leading the way. He's formidable as Wardaddy. He doesn't baby sit the younger men, but he doesn't take any flak from them either. What he says goes --- and the rest understand him --- and Pitt ultimately commands that respect with his performance.

Generally, they get along extremely well as a group, but there are a few tense moments. Spending time in a small German town right before their next deployment, Wardaddy and Ellison meet two young German women in their home. Wardaddy wants only hot water and cooked eggs, but Ellison falls for the younger girl, Emma (Alicia von Rittberg) immediately.

When the other three, who are drunk, find them, the atmosphere becomes fraught with tension. Wardaddy defuses the situation, which could have turned ugly. As with the entire film, all of this is meant to demonstrate what war can do to the men who must fight.

Lerman, Pena, LaBeouf and Bernthal are superb. Lerman's baby blue eyes and face are essential in portraying this young kid who refuses to get his hands dirty by killing Nazis. But the war gets to him, too, and he manages to redeem himself. As for LaBeouf, this is the best role he's had in a very long time. Swan is a religious man, who still enjoys killing. LaBeouf gives him that much-needed psychological edge.

Pena worked with Ayer on "End of Watch', so Ayer created the role of Garcia specifically for him. He's just such a good, solid actor --- a true pleasure to watch. And Bernthal's Grady may be the least likeable of the group, but he, too, never lets Wardaddy nor the others down.

As I mentioned, Ayer's attention to all areas of this movie is remarkable. Even the tanks used --- some real, others rebuilt --- are structurally correct and authentic in the way they load and fire their shells. The action in "Fury" is fast and furious, and completely fascinating.

Director of Photography Roman Vasyanov was determined to photograph a realistic movie, which was shot on film, not digitally. The landscape of war in "Fury" is reminiscent of older WWII films, with a simple and classic approach. The initial scene of a German officer riding his magnificent white steed throughout a field, at dusk, littered with dead soldiers is unforgettable and extremely powerful, thanks to Vasynov's meticulous work.

"Fury" is a terrific war film effort. Add to all of the above a wonderful score by Steven Price, who won an Oscar last year for the "Gravity" soundtrack, and David Ayer may be on his way to an Oscar nomination.

Hollywood has had a long and illustrious relationship with war movies, especially those about World War II. "Fury" is the latest entry, starring Brad Pitt, and it is destined to become one of the classic war films of all time.

Pitt was entertaining and engaging in Quentin Tarantino's "Inglourious Basterds", but that was a caricature role more than one portraying real life. As Don 'Wardaddy' Collier, he is a highly disciplined army sergeant leading four other soldiers in their Sherman tank, nicknamed Fury, on a dangerous mission inside Nazi Germany. The time is April 1945. We, the audience, know that the war is coming to an end, but those fighting in it do not, although Wardaddy surmises that the end is coming soon.

Joining the sergeant inside Fury are Boyd 'Bible' Swan (Shia LaBeouf), the gunner, Grady 'Coon-Ass' Travis (Jon Bernthal), the loader, Trini 'Gordo' Garcia (Michael Pena), the driver, and a wet-behind-the-ears private named Norman Ellison (Logan Lerman), the assistant driver who also mans one of the tank's machine guns. Norman was trained as a 60-words-a-minute typist in the military, and feels woefully inadequate thrust into an actual battle situation.

Pitt's character must somehow transition Norman into the rigors of war so that he is not only not a liability to the rest of the crew, but an asset upon which all their lives may depend. Norman is initially subjected to the expected ridicule and hazing of the others, and he must "man-up" in a hurry. His early baptism includes an order to execute a captured Nazi, just one gritty scene out of many in this film.

Lerman's portrayal (he was most recently seen in "Noah") is faultless.That's critical since the growth of his character is central to the story. He predictably becomes battle-hardened, and even finds romance after the Americans secure one small village.

Director David Ayer co-wrote the script for "Fury". He also directed Pena, along with Jake Gyllenhaal, in "End of Watch", and he penned the script for "Training Day" for which Denzel Washington won an Oscar. It is obvious that Mr. Ayer knows how to construct a scene, build tension and get the most out of his actors.

"Fury" is teeming with realism. From the tanks to the costuming to the battle scenes, the movie places the viewer in the midst of the action. Music by composer Steven Price (Oscar winner for "Gravity"), and the extraordinary sound effects punctuate the dire dilemma the men face, being outnumbered 60-1 in the climactic battle scene.

The cast endured many days in "boot camp" to replicate actual warlike conditions, with Ayer going so far as to truck in tons of mud and muck. There is even a tank "dogfight", where Wardaddy's Fury, outsized by the Nazi's massive Tiger tank, tries to gain a strategic advantage by circling behind the German machine, with Wardaddy barking directions to Gordo.

"Fury" is a thrilling and captivating project. Just when you think you've seen every possible staging of World War II, along comes a truly exceptional interpretation.