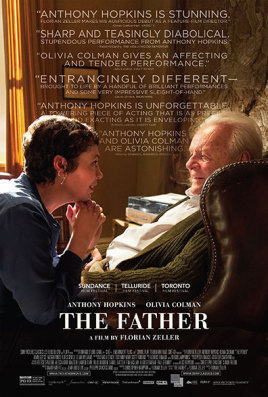 First-time film director Florian Zeller, who co-wrote this screenplay with his long-time collaborator, Christopher Hampton, based on his hugely successful play, “The Father”, claims he wrote the main role of Anthony specifically for Anthony Hopkins. After watching THE FATHER, it is difficult to imagine anyone else playing the character.

Anthony, who is 80, has been living alone for years after the death of his wife. He has a lovely flat in a posh area of London. His daughter, Anne (Olivia Coleman), visits regularly and has been desperately seeking someone strong-willed enough to deal with Anthony’s sudden changes in temperament due to his struggle with dementia.

It has become increasingly evident that Anthony can no longer function on his own, so his flat morphs into the one Anne shares with her husband, Paul (Rufus Sewell). A new caregiver named Laura (Imogen Poots) is being interviewed by Anne and Anthony, and it seems like Laura may finally be the right one. She reminds Anthony of his other daughter, Lucy --- his favorite as he constantly reminds poor Anne --- who is deceased.

As Anthony’s mind continues to betray him, Paul pressures Anne to consider putting Anthony in a home. He has reached a point where he barely recognizes anyone, including his new caregiver Laura. As the film draws to its close, we begin to realize the identity of the people Anthony has mistaken for his beloved daughter, Anne, and her husband, Paul.

THE FATHER is not an easy movie to watch, especially if you have or have had a family member diagnosed with this terrible and unforgiving condition. But THE FATHER isn’t really just about dementia, it’s more of a story about the point in time when the child becomes the parent’s parent.

Anne is happily married and wants to move to Paris to be with her husband. She also doesn’t want to abandon her father, but as things become progressively worse for Anthony, she basically has no choice. She must make the decision to lead her life, not her father’s.

After learning that Zeller had written the role of Anthony for him --- and then reading the screenplay --- Hopkins was “flattered and honored” to take on the part. It is the perfect character for him. He is all of Anthony and then some, particularly when Anthony is charming Laura with his fantasy of being a tap dancer, and later when he’s weeping in the arms of his latest caregiver played by Olivia Williams. It’s such a brilliant scene, one that will remain with me for a long while.

If it wasn’t for Chadwick Boseman’s memorable last performance in MA RAINEY’S BLACK BOTTOM, I would declare Hopkins the winner of the Oscar for Best Actor. He is the consummate actor and Zeller’s script affords Hopkins the luxury of reveling in a character perfectly suited to his many talents.

Zeller and Hampton’s screenplay is incredibly crafted. As I have stated innumerably, it’s all about the writing. Even Ms. Coleman agrees, as she is quoted as saying “For me, it’s always the writing that clinches it.” And THE FATHER once again proves how true that sentiment is.

As for Coleman’s performance, she has never been better. She possesses a wonderfully expressive face, which aids in her portrayal of Anne mightily. This is a difficult role --- the emotions are overwhelming --- and she handles it with such ease and grace. Plus, she and Hopkins are superb together. They are a tour-de-force as father and daughter --- at once loving and heartbreaking.

THE FATHER is one of those small films which appeals greatly to David and me. It boasts a small cast of only six actors, but each has a definitive role to play and everyone involved is exceptional. THE FATHER is akin to watching a masterclass in acting. Do not be deterred by the subject matter. Instead, seize the opportunity to watch Hopkins, Coleman and the rest work together to bring Zeller’s important story to the silver screen.

Nearly 30 years ago veteran actor Anthony Hopkins won his only Academy Award portraying what the American Film Institute called the number one villain of all time. His turn as Hannibal Lecter personified pure evil.

In THE FATHER his latest role is that of Anthony, an 80-year-old man whose entire world is thrust upside down. His memory is fading, he doesn’t recognize people he’s known and his lone surviving daughter believes he can no longer live on his own. Yes, Anthony is suffering from dementia, and Hopkins’ astounding performance may earn him a mate for that first Oscar.

French director Florian Zeller co-wrote the movie’s screenplay along with Oscar-winner Christopher Hampton (DANGEROUS LIAISONS,1988), based on his own highly honored stage play of the same name. Because he always had Hopkins in mind to play the lead, Zeller named his main character Anthony. He also cast Olivia Coleman --- another Oscar standout --- to play Anthony’s middle-aged daughter Anne. Both Hopkins and Coleman are brilliant in a story that is undeniably sad, difficult to watch, but also brutishly funny at times.

At the outset Anthony seems quite capable to carry on in his own London flat, and despite the creeping dementia that will consume his daily life, Anthony is steadfast on insisting that he will not go anywhere. But Anne has other ideas, however not in a selfish or evil way. Coleman exudes all the anguish of an adult child desperate to help her parent, a position many of us will face as time goes on.

Parts of THE FATHER are as confusing for the viewer as they are for Anthony. When Anthony questions a man who suddenly appears in his flat, the man (Mark Gattis) responds by telling Anthony that he, indeed, lives there, not Anthony. When a woman (Olivia Williams) enters the same apartment with dinner, Anthony has no clue who she is, nor do we. Williams will surface later as Katharine, Anthony’s nurse, and her brief turn is a marvel of kindness and empathy.

Anthony is now doubting everything around him. When Anne hires a carer --- the British term for caregiver --- by the name of Laura (Imogen Poots), Anthony tells her how gorgeous she is, offers her a whiskey and regales her with a sample of his alleged tap-dancing talent. Anne corrects him by stating that he was really an engineer.

Rufus Sewell plays Anne’s husband Paul who sports a wristwatch that Anthony is enamored with, believing it is his own. Early on Anthony accused another carer of stealing his watch when in reality he forgot he had hidden it in a secret hiding place.

THE FATHER is really about the rapid deterioration of an elderly man’s mind. It is a stark reminder that the incurable conditions of dementia will be with us now and for the foreseeable future. On a personal note, my own mother at age 92 showed early signs of dementia when she asked my younger brother and me if we knew each other. It is practically impossible to watch a film like THE FATHER and not put yourself in the same position as Anne, or maybe even Anthony himself.

At one point when Anne is leaving a facility, she passes a huge sculpture in a courtyard. It is the front of a human face but there is nothing else --- no hair, no back of the head, and most notably --- no mind. The shot lasts only seconds and could be easily missed, but I believe Zeller had every intention of using that prop which is both eerie and prophetic.

Julianne Moore won her only Oscar in 2014’s STILL ALICE in which she portrayed a very sympathetic victim of early-onset Alzheimer’s. Hopkins’ performance is that of a character who is often gruff, demeaning and angry, typical of someone thus afflicted. But his final tearful moments in THE FATHER are as far removed from Hannibal Lecter as anyone could imagine. It is a tribute to the man’s incredible talent to move an audience in very different ways.