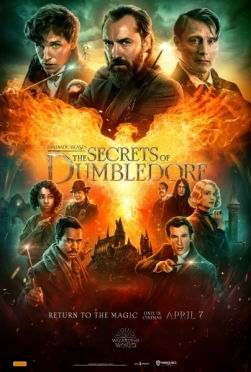 A vast improvement over the second installment in this five-part series, Warner Bros. Pictures’ FANTASTIC BEASTS: THE SECRETS OF DUMBLEDORE, is a return to the fun and excitement of former “Harry Potter” days. Eddie Redmayne returns as Newt Scamander, a Magizoologist, who is sent on a secret mission by Professor Albus Dumbledore (Jude Law), along with a few other wizards, to save the world for those like them --- and Muggles.

Unfortunately, Grindelwald has his own faithful --- and demonic --- little army willing to stop at nothing to make sure that he succeeds. Alison Sudol reprises her role as Queenie Goldstein, Jacob’s former paramour, and now a mind reader for Grindelwald. Also in the group is Credence/Aurelius Dumbledore (Ezra Miller), who is dealing with abandonment issues, and another loyalist, Rosier (Poppy Corby-Tuech).

As the action begins, Newt is on the lookout for a Qilin (pronounced chillin) about to give birth. The mother looks like a dragon/horse, while her sweet offspring resembles a newborn fawn. These creatures have the ability to see into one’s soul and determine if they are pure of heart --- the condition which must be met to become wizard world’s president.

Grindelwald’s henchmen appear in time to steal the baby from Newt, unaware that the mother Qilin gave birth to twins. As Grindelwald makes his way to Bhutan to claim victory with a re-programmed Qilin, it is up to Newt and his motley crew to intervene.

FANTASTIC BEASTS: THE SECRETS OF DUMBLEDORE takes the audience on an adventure that encompasses China, the U.K., Germany, the Austrian Alps, New York --- and fan favorite --- Hogwarts School of Witchcraft and Wizardry. It’s all so very exciting and highly entertaining with a few twists and surprises thrown in.

The production designs by Stuart Craig and Neil Lamont, who’ve worked on all the “Harry Potter” films, are phenomenal. Director David Yates has assembled quite a formidable crew when it comes to the aesthetics of this series. As one would expect from a movie about wizards, the special effects are astonishing and well- choreographed. The costumes by Colleen Atwood are divine and add so very much to the story.

There is a plethora of new “beasts”, with one hilarious scene depicting Newt and Theseus doing their best to escape the creepy Manicores with their lives. Instead of describing them, just see FANTASTIC BEASTS: THE SECRETS OF DUMBLEDORE to find out.

The cast is superb. David and I are huge fans of Redmayne --- and also Law. Mikkelsen is the perfect replacement for Johnny Depp --- he does dark and evil so well. Which brings up another issue. There has been so much negative publicity surrounding this film, partly because of Depp, and he’s not even in the movie.

FANTASTIC BEASTS: THE SECRETS OF DUMBLEDORE should be seen based on its own merits. It’s nonstop enjoyment despite its rather lengthy running time of two hours and 22 minutes. But hey, if David can stay awake for the entire experience --- and really like

it --- that’s recommendation enough right there.

In this latest film, FANTASTIC BEASTS: THE SECRETS OF DUMBLEDORE based on J.K. Rowling’s creation, a creature called a Qilin (pronounced chillin) plays a major role amidst a political election. The deer-like animal can see into a person’s soul and determine if that individual is pure of heart. If so found, the Qilin will bow to a candidate, for example, thus potentially influencing the electorate. Now wouldn’t that be useful today?? But I digress.

This third in the FANTASTIC BEASTS series boasts the usual visual effects, most notably Newt Scamander’s (Eddie Redmayne) “stick” pet, the Bowtruckle named Pickett. A new addition is the scary presence of what looks like a combination of crabs and scorpions called Manticores. Newt and his brother Theseus (Callum Turner), whom he is helping escape from the Manticores’ prison, must imitate their movements. Director David Yates hopes the audience finds great humor in the actors doing something humiliating (Redmayne’s word, not mine). So clearly the movie offers substantial humor.

To be clear, you don’t have to be an expert on all things “Harry Potter” to be entertained. Admittedly I didn’t understand everything that was happening, so there’s that. Even Jeanne admitted a similar sentiment, as difficult as that had to be for her. Our daughter attended the screening with us but was non-committal on that score. However, she is a huge “Harry Potter” fan going back to the books and films, so my money is on her completely comprehending all the shenanigans.

Other cast standouts include Jude Law as Professor Albus Dumbledore, Mads Mikkelsen as Gellert Grindelwald, and Dan Fogler as the Muggle baker Jacob Kowalski. Mikkelsen makes for an ideal villain, something he is well known for as an actor. Fogler adds to the comic relief after Newt presents him with a “wand” of sorts. Law livens up every performance with his undeniable screen presence. And the adorable Alison Sudol reprises her role as Queenie Goldstein, Jacob’s one true love.

James Newton Howard, the nine-time Oscar nominated composer, provides the stirring score. FANTASTIC BEASTS: THE SECRETS OF DUMBLEDORE is a showcase for superb cinematography led by Director of Photography George Richmond. The notable costumes in this period piece are courtesy of Colleen Atwood.

Christian Mänz heads the vast team of visual effects personnel. It is he who draws a distinction between “fantastic’ and “fantasy”, noting that he was striving for creatures that had some relativity to the real world of nature.

The main storyline of the film, in brief, is the election of the President of the International Confederate of Wizards, a post to which Grindelwald is desperate to hold. Fortunately for him, he is exonerated of past crimes --- clearing the way for him to be a candidate --- which thrills his army of rabid fans. Hmmm --- if this sounds like a possible not-too-distant scenario, it also sounds like an easy parallel to draw.

Jeanne no doubt has mentioned this, but I managed to stay awake --- without my daughter poking me --- despite the 142-minute running time.