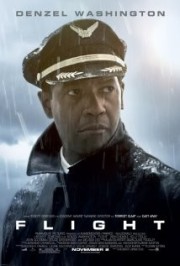 If you weren't terrified of flying prior to seeing this film, you will be now! Robert Zemeckis, the brilliant director of so many films like "Forrest Gump", "Back to the Future", et al, has shaped a harrowing story of control and addiction. Of course, he selected none other than the over-achieving Denzel Washington to star, so "Flight" is destined to be one of the Oscar picks for Best Picture.

Whip Whitaker (Washington) is a smooth-talking charmer --- able to lie his way out of anything --- which comes in handy since he is an alcoholic and an airline pilot. Though he is intoxicated when he boards his assigned morning flight, his adrenaline kicks in when the plane comes apart mid-flight. Whip does something few pilots could have done --- he manages to land in a field with few lives lost. All is good until the pilot's union rep, Charlie Anderson (Bruce Greenwood), and the attorney for the union, Hugh Lang (Don Cheadle), find out the level of alcohol in Whip's system after the crash.

At two ours and 18 minutes, this is a difficult movie to sit through. It's never easy to watch someone's life unravel. And Washington is a master at making the audience squirm. More often than not, we are used to seeing him as the "good guy", so enduring his wretchedness and abuse of others is something we would prefer to avoid. But his portrayal of a drunk and drug addict is worthy of an Academy nomination itself. He's chilling --- right when you think he has this licked, Washington/Whip pulls the rug right out from under you.

There are some flaws --- actually one major one, but I shan't give a hint because it would give too much away. But despite that, "Flight" is a riveting piece of filmmaking. First, you can't take your eyes off the incredible special effects of the doomed airplane, then you can't stop watching Washington's performance ---it's just that good!

Director Robert Zemeckis has returned to live action films after varied successes with animation ("The Polar Express", "A Christmas Carol"). And with "Flight", starring Denzel Washington in a stirring, Oscar-caliber performance, Zemeckis' return is 100% certified.

Washington said recently on a late-night talk show that this film, written by John Gatins ("Coach Carter"), is not an indictment of pilots in general, but his realistic portrayal of Whip Whitaker, a commercial pilot who drinks heavily, is most certainly a study of alcoholism, and the self-denial of some who are afflicted.

Our first glimpse of Whitaker is in bed. He's half naked in a hotel room with a beautiful woman who is fully naked. He is divorced and speaking to his ex on his cell. He reaches for a half-empty beer bottle and takes a swig. No big deal, except it's early in the morning, our first glimpse that maybe this guy has a drinking problem.

Cut to the cockpit of a commercial plane, full of passengers, and Whitaker and his co-pilot, Ken Evans (Brian Geraghty), take off in a terrible rainstorm. This might be seen as a script flaw --- how many planes would take to the skies during a storm versus waiting it out? What ensues is a lot of turbulence until the plane manages to find calmer air. But this is only a teaser for the real trouble,

a terrifying episode of mechanical failure that results, I dare say, in the most harrowing airplane sequence ever filmed.

But it's early in the movie, so we know there is much more to come. Initially Capt. Whitaker is viewed as a hero, but eventually the powers that be, specifically the National Transportation Safety Board (NTSB), question his sobriety while flying the plane.

The remainder of the film features Whitaker, supported by friends like Charlie Anderson (Bruce Greenwood), an old navy buddy, and Hugh Lang (Don Cheadle), a criminal defense attorney, at odds with investigators and attorneys trying to prove his negligence. Everything culminates in an intimidating session for Whitaker in front of a federal panel, led by a ferociously determined NTSB official, Ellen Block (Melissa Leo).

Whitaker also has an ally in a character named Harling Mays (John Goodman), who provides as much comic relief to the audience as he does serious help to Whip. Along the way, Whip meets a sexy druggie named Nicole (Kelly Reilly) who tries to keep him on the straight and narrow, even as she fights her own demons. It's a relationship that evokes our empathy thanks to the writing and Reilly's convincing turn.

Gatins' original script is never maudlin or preachy, and it keeps us guessing until the end. Will Whitaker admit his alcoholism or will he sustain his lying ways?

I agree with Jeanne that "Flight" deserves a place among the best films of the year (so far), and its two plus hours running time does not detract from its entertainment value. The movie further cements Zemeckis as one of our finest directors ever.

But "Flight" is Denzel's show all the way. His character is neither completely good (see most of his films) nor a total bad guy (see "Training Day"). He is a combination of both which manages to win our sympathy. And come next February, don't bet against him winning something else --- an Academy Award.