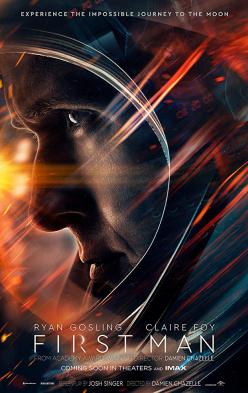 FIRST MAN is out of this world --- literally and figuratively! Damien Chazelle's latest film, sure to be another Oscar nominee, is based on James R. Hansen's book about Neil Armstrong, featuring an outstanding performance by Ryan Gosling, and NASA's race to land first on the moon.

Armstrong's wife, Janet (Claire Foy), shares with a friend that one of the reasons she fell in love with Neil was his stability --- she wanted a normal life. Little did she know in college when they met how unpredictable her life was to become. Starting out, Armstrong was a test pilot for the Air Force, but following a family tragedy, Neil applies to be an astronaut with NASA in Houston.

Declaring it a "fresh start", Neil and Janet move their son, Rick, with another on the way, to a suburb of Houston. Surrounded by other families in the same program with Neil, the Armstrongs put down roots and Neil's career takes off in an unexpected trajectory.

After untold setbacks and several deadly accidents involving fellow astronauts, Apollo 11 is ready with Armstrong leading the mission of three, including Buzz Aldrin (Corey Stoll) and Michael Collins (Lukas Haas). Though we all know the amazing outcome, FIRST MAN does a first-rate job of re-creating the unbearable tension and excitement of the first landing on the moon.

But it isn't strictly that historical event which makes FIRST MAN the special movie that it is. Chazelle and his top-notch crew have duplicated many aspects of the program leading up to that momentous landing. Every sequence involving space, from the opening gripping test flight to the ultimate prize, is superbly crafted.

We feel as if we are right there in the spaceships with the astronauts. The claustrophobic interiors, seemingly hundreds of switches on their panels, the tenseness right before liftoff --- the perspiration --- and then the extreme beauty of outer space leave us breathless. Chazelle's Oscar-winning director of photography, Linus Sandgren, has shot an incredibly wondrous, memorable film. The moon surface sequence alone is worthy of an Oscar.

None of this would matter, however, without the driving force of Gosling's performance. Armstrong was a private man and Gosling captures perfectly that part of his nature. He manages to convey a great deal in his expressions, cementing Armstrong's stoic character with his portrayal. I found his quiet, yet powerful, execution to be very moving. It's difficult to truly imagine what these men --- these pioneers in space --- really endured.

Foy plays the forceful woman behind Armstrong with grace and dignity. Unwittingly, Janet becomes the face of the wives of NASA, a role she never asked for nor wanted. This part is not much of a stretch from playing Queen Elizabeth on "The Crown". Both women were ahead of their times --- in responsible positions, yet well aware of the men and their roles in their lives.

She's terrific, especially when confronting Neil about talking to their sons before he leaves for the Apollo 11 mission. And then, upon his return, so much is said --- and yet not spoken --- when she and Neil meet through the window of his quarantine. Oscar nod for Best Supporting Actress?

FIRST MAN is a phenomenal achievement with many outstanding supporting roles --- too many to name. I'm sure David will mention a few. And I must note the superb screenplay by Academy Award winner Josh Singer (SPOTLIGHT, THE POST), because you know --- it's always about the writing. Plus FIRST MAN boasts an amazing soundtrack by Oscar winner Justin Hurwitz (WHIPLASH). This film MUST be seen on the big screen --- preferably in IMAX!

Even now, nearly 50 years after Neil Armstrong became the first man to set foot on the moon, I will look up at Earth's satellite and still be awestruck that someone actually walked there. Oscar-winning director Damien Chazelle has made a successful leap from a movie musical (LA LA LAND, 2017) to an amazingly realistic panorama of NASA's greatest accomplishment with FIRST MAN.

The film is a superb re-creation of the moon landing and all the facets of the project. From watching the astronauts go through rigorous and often torturous space simulations --- think of an out-of-control, wild amusement park ride --- to all the technical data that requires total understanding, FIRST MAN is a highly ambitious and fascinating effort.

When Armstrong (Ryan Gosling) takes his initial step on the moon's floor --- leaving his footprint ---it feels like we're seeing it for the first time. Of course, in July 1969, the whole world was witness to the United States becoming the first, and only country, to reach the moon, and actually have a man walk on it.

Gosling portrays Armstrong as largely unemotional, except when dealing with his own memories of an unspeakable loss in his family. The feeling of grief permeates the entire movie, even as Armstrong steels himself to go on with his career. In fact, Gosling partly pitched the story as one driven largely by grief.

At a press briefing prior to the moon shot, Armstrong demonstrated his stoic personality, at least in public. A reporter asked Armstrong and his astronaut partner Buzz Aldrin (Corey Stoll) what they would most like to take on their moon mission. Aldrin quipped something about a piece of his wife's jewelry, which garnered snickers from the press, but Armstrong, straight-faced and ever the pragmatist, replied "more fuel".

Claire Foy plays Armstrong's wife, Janet, and she is excellent. Fans of TV's "The Crown" know her indomitable presence as Queen Elizabeth, that of a world leader. Here she adopts a natural sounding American accent and shows her true grit by taking no guff from anybody. When the heads of NASA order her radio connection shut off as she listens to one of her husband's dangerous predicaments in a practice session, she demands, in person, that they restore it.

The film also re-enacts the gruesome fire that claimed the lives of Gus Grissom (Shea Whigham) and two other astronauts more than two years before the successful moon landing. For those of us who may have forgotten the event in 1967, this sequence is a grim reminder of that terrible incident, and the inherent dangers of space travel, in general.

One thing missing from this film, aside from the controversial exclusion of the American flag being planted on the moon, is Walter Cronkite's memorable commentary. Cronkite, of course, was arguably the pre-eminent network (CBS) journalist of his day. Chazelle did include actual footage of author Kurt Vonnegut proclaiming that the American space program might be too costly, both financially and in terms of human lives lost. So naturally I thought why not give us 30 seconds of Cronkite's extraordinary reporting of the event?

Our screening was in IMAX, and there is no doubt that this technology enhanced the viewing experience. However, we see only one brief glimpse of the Earth from Armstrong's perspective as he stands on the moon's surface. I would have welcomed another shot or two.

The music by Justin Hurwitz is dramatic and stirring. Josh Singer, Oscar-winning writer for SPOTLIGHT (2015) who also penned last year's THE POST, adds to his impressive resume here with a screenplay based on the book by James R. Hansen. Hansen received a PhD in the history of science and technology from THE Ohio State University (my alma mater).

The supporting cast is superb and lends total authenticity to the movie with their performances. Jason Clarke and Corey Michael Smith play the other doomed astronauts, Ed White and Roger Chaffee respectively, who perished in the fire with Grissom. Kyle Chandler plays Deke Slayton, Director of Flight Operations, and Ciarán Hinds is Bob Gilruth, the first Director of the Space Center.

FIRST MAN is well worth seeing, especially by moviegoers too young to appreciate the magnitude of NASA's signature accomplishment. Before his death, the real Neil Armstrong met with producers of FIRST MAN to give his blessing on a film about his life. Unfortunately he died on August 25, 2012 at the age of 82, some 43 years after he made world history.