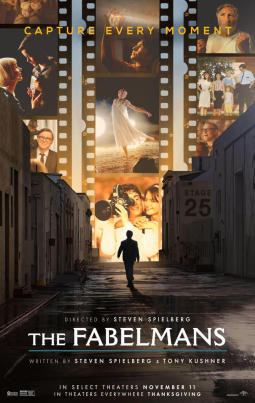 Unless you’ve been living under a rock, you probably know that THE FABELMANS is the story of director Steven Spielberg’s family life written by Spielberg and his long-time friend and collaborator, Tony Kushner. Beginning in the fall of 2005, when Kushner and Spielberg were working together on MUNICH, Kushner started quizzing Spielberg about his past, specifically asking “When did you decide you wanted to be a movie director?”. What began as a way to pass time on a movie set turned into a fascinating account of the famous director’s personal history.

In 1952, at the age of six, Spielberg was at the Fox Theater in Philadelphia with his parents watching THE GREATEST SHOW ON EARTH, a Cecile B. DeMille production. THE FABELMANS begins in the very same way with young Sammy Fabelman (Mateo Zoryan Francis-DeFord) sitting in a dark theater with his mother, Mitzi (Michelle Williams), and his father, Burt (Paul Dano), mesmerized by DeMille’s classic.

As a teenager, Sammy (Gabriel LaBelle), is forced to deal with various issues when his father moves the family first to Phoenix, Arizona, a place they were very happy, then to Los Gatos, California, where Sammy has his first encounter with anti-Semitism at his high school. A jock --- and the coolest guy on campus --- Logan Hall (Sam Rechner) and his jerk sidekick, Chad Thomas (Oakes Fegley), make life miserable for Sammy because he’s Jewish.

Monica Sherwood (Chloe East), one of the popular girls, becomes fascinated with Sammy and his religion. She’s obsessed with Jesus and tries to “save” Sammy, which in reality she does when she offers Sammy her father’s 16mm camera to film their senior class “ditch day”.

Filmed on location at the real Zuma Beach in Malibu, Sammy’s creation is the hit of the prom and convinces him that he must follow his love of filmmaking. After a chance meeting with the famous director, John Ford, Sammy/Steven’s fate is sealed.

The making of THE FABELMANS was an extremely emotional journey for Spielberg. Everything, from the actors chosen to play his family to the set designs, costumes, and marvelous score by John Williams --- his 28th with Spielberg --- all came together to replicate Spielberg’s memorable childhood.

The actors themselves are particularly crucial. LaBelle is a unique find. It’s impossible to fathom what he must have experienced portraying one of the most revered directors in film history, but he is flawless. And acting alongside  Williams and Dano, he held his own.

Williams’ Mitzi is at once joyful and heartbreaking. She loves Burt and her family, but we learn, along with Sammy, that it isn’t enough. Like many of her other roles, Mitzi is an Oscar-worthy portrayal by Williams. And Dano is superb as the unsuspecting nerd so caught up in his work that he doesn’t see what’s happening right in front of  him. Though Mitzi and Sammy enjoy a close but complicated relationship, it is eventually Burt who sets him free.

Maestro Williams is retiring from composing film scores. This and the fifth INDIANA JONES film will be his last. For that reason alone, THE FABELMANS is a must see on the big screen.

It should come as no surprise that Steven Spielberg’s latest film, THE FABELMANS, is an instant contender for Best Picture at the next Academy Awards. Based on the legendary director’s memories of growing up in New Jersey, Arizona and California as a young man obsessed with making movies, THE FABELMANS was a labor of love for everyone involved. And, as one might expect, the cast and crew reads like a Who’s Who of Academy Awards nominees.

Five-time Oscar winner John Williams --- Spielberg calls him “Johnnie” --- provides the score for the film and it represents the incredible 28th and final collaboration between these two friends. Mark Bridges, a two-time Oscar winner, is costume designer. Rick Carter, also a two-time Oscar recipient, is production designer. Michael Kahn Ace, a triple Oscar winner, is co-editor alongside Sarah Broshar. Janusz Kaminski, a double Oscar winner and Spielberg’s exclusive cinematographer for 30 years, is the man behind the camera for THE FABELMANS. Spielberg co-wrote the screenplay for his film along with great friend and Pulitzer Prize-winning playwright Tony Kushner (“Angels in America”), fresh from their collaboration on WEST SIDE STORY. It marks their third screenplay together after MUNICH and LINCOLN.

The fabulous cast members are also no strangers to accolades. Michelle Williams, a four-time Oscar nominee, plays Spielberg’s mother Mitzi, Leah being her real-life name. Her costumes consisted of true replicas of Leah’s preferred wardrobe during her lifetime. Williams is sensational as the conflicted wife and mother whose artistic talents are put on the back shelf.

Paul Dano, still lacking Oscar recognition but honored on so many other levels, plays Spielberg’s father, Burt, Arnold in real life. Arnold was a computer designer working for RCA and General Electric, and Dano is the epitome of a caring father and husband, but whose first love is his job.

The inimitable Seth Rogan portrays Burt’s best friend Bennie, while Oscar nominee Judd Hirsch plays Mitzi’s Uncle Boris. Their roles in the script are both pivotal and of course, Rogen and Hirsch, the consummate pros, do not disappoint. It was Kushner who devised the fictional name Fabelman while Spielberg came up with the characters’ first names.

Young Gabriel LaBelle has the distinct honor of portraying Spielberg as Sammy, a teenager with “insatiable curiosity”. LaBelle is particularly striking when he discovers a family secret after perusing some old camera footage. And when the bullied teen films the traditional senior class “ditch day” he gets his revenge on the two classmates who tormented him. In fact, throughout the movie, we imagine it is Spielberg in virtually every scene as Sammy.

Spielberg became so rapt with the shooting of what is essentially his childhood story that at times, he forgot to yell “cut!”. He also utilized a variety of California locations including a critical scenario of a family camping trip. The filmmakers also recreated the three family homes in which the director grew up, proving sentimental to Spielberg.

THE FABELMANS is an in-depth look at the life of a Jewish family living in a predominantly Christian town in the 1950s and 60s. This film screams to be seen a second time --- there is just too much going on to grasp everything the first time around. However, we know intuitively that we are witnessing something very special.

Spielberg relayed his story to Kushner over a period of several years. Of that relationship Spielberg says “The only thing that mattered was that I could open up to somebody, unpack all of my suitcases in front of somebody and never feel embarrassed or ashamed.”

Jeanne and I often complain about movies that run too long. But --- at two hours and 31 minutes --- THE FABELMANS could have gone on much longer and nobody would have minded.