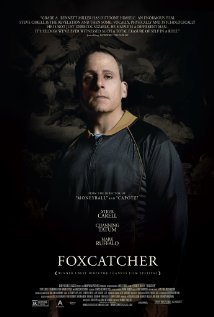 It's not that Steve Carell hasn't done a serious role before --- as David always reminds everyone, he starred in "Hope Springs" opposite Meryl Streep and Tommy Lee Jones as their therapist. However, seeing him totally transformed with a proboscis prosthetic, and a completely different demeanor, is somewhat unsettling. His portrayal of John Eleuthere du Pont will leave you shocked and awed.

on --- marrying Nancy (Sienna Miller) and having two children, coaching college wrestling, etc. Mark has constantly lived in Dave's shadow and the resentment is beginning to surface.

Multi-millionaire du Pont has always had a penchant for wrestling. He invites Mark to the du Pont farm in Pennsylvania called Foxcatcher to train for the 1988 Seoul Olympics. A state-of-the-art facility has been built on the estate and du Pont hopes to lure both Mark and Dave there to prepare.

Initially Dave resists, but after a disastrous event for Mark prior to the qualifying trials, he relents. He ends up moving his entire family to a home on the estate so that he and Mark, and the rest of the Foxcatcher team, can train full time.

Du Pont's mother, Jean (Vanessa Redgrave), is a well-known equestrian who keeps a stable full of well-bred, expensive horses, and a trophy room full of awards to showcase her acumen. Her disdain for John's obsession with wrestling is palpable --- she can barely stay in the same room with him while he tries so desperately to win her approval.

It took eight years for the immensely dedicated director Bennett Miller to make "Foxcatcher". Two of his previous films, "Capote" (2005) and "Moneyball" (2011), both Oscar nominees, are outstanding pieces of work, but with "Foxcatcher" Miller may have outdone himself. His attention to detail, along with the disturbing facts of this story, catapult this movie into a different stratosphere. And the fact that this tragedy is true makes "Foxcatcher" even more compelling.

Carell's portrayal of du Pont is eerily disquieting, yet hypnotic --- you cannot take your eyes off him when he's on screen. Obviously well educated --- du Pont had many degrees and accomplishments, including research books on various subjects --- he lacked certain social skills which apparently ostracized him from other members of his class.

In "Foxcatcher", du Pont informs Mark that he learned later in life that his mother paid their chauffeur's son to be his best friend. Carell captures all of his loneliness and false bravado perfectly. He's such a creepy soul, running around in the wrestlers' gym in his little shorts, imparting his pretentious wisdoms, that it's hard to believe this is actually Carell behind the make-up.

Do not for a minute let the handsome face of Tatum deceive you. This guy can act, and he has never been better than here as Mark. Virtually raised by his slightly older brother, Mark is so dependent upon Dave that it is heart-breaking, and Tatum exudes those emotions beautifully. He's broken, and sad --- in tremendous need of a father figure, which he believes he has found in du Pont.

Ruffalo has been a favorite of mine for years. He was terrific earlier this past summer in "Begin Again" with Keira Knightley, and in "Foxcatcher" he literally embodies Dave with a quiet fierceness. Both Ruffalo and Tatum had to endure months of training for these roles. Their wrestling coordinator and consultant on the film was John Giura, Dave's real-life friend and fellow wrestler on the estate.

None of this would be possible without the brilliant script by E. Max Frye and Dan Futterman, who wrote the "Capote" screenplay for Miller. There are no false lines or missteps in "Foxcatcher". The dialogue is clean, meaningful and chilling, the necessary component to make this an unforgettable movie. Add to all of this the bucolic cinematography by Greig Fraser, and mesmerizing soundtrack by Rob Simonsen and West Dylan Thordson, and it makes for one hell of an effort by Miller and his crew.

I read an early review that attempted to politicize "Foxcatcher", Miller, and his portrayal of John E. du Pont. Trust me, there is nothing political about this very real tragedy and the person responsible for the outcome.

John du Pont called himself a philanthropist, a philatelist and an ornithologist. He was all of these things, and more. He was also the epitome of a privileged life gone bad, and he is the subject of a vividly compelling new movie, based on a true story, called "Foxcatcher", starring Steve Carell, Channing Tatum and Mark Ruffalo.

Living on a fabulous estate in Pennsylania with his elderly mother, Jean (Vanessa Redgrave), du Pont (Carell) establishes a training facility for wrestlers to help fulfill his dream of coaching an Olympic champion. Known as Team Foxcatcher, du Pont takes under his wing 1984 Olympic Gold Medal wrestler Mark Schultz (Tatum), supporting him financially and emotionally, while furnishing him with a chateau on the grounds of his vast estate. Eventually, Mark is joined by his older brother Dave (Ruffalo) --- also an Olympic gold medalist --- along with his wife and children, who are likewise provided housing on the 800-acre property.

As soon as we meet du Pont, it is clear that he is cut from a different cloth than most people. Amidst a stupendously wealthy environment, he is direct, abrupt, alternately polite and brusk --- all in a very toned-down, deliberate manner. He also has a very short fuse, and we sense he could be a time-bomb on the verge of erupting.

Steve Carell is, of course, known for his comedic work in film, some very good, others not so much. His recent turn in "Alexander and the Terrible, Horrible, No-Good, Very Bad Day" as the head of the family is not funny, just laughable. On the other hand, his therapist role in the under-rated "Hope Springs" (2012), is serious and capable. In "Foxcatcher", his performance is career-defining, one that should guarantee him an Oscar nomination as the complex and mysterious du Pont. Carell is barely recognizable, sporting a prosthetic nose that dramatically alters his appearance.

Du Pont is also a very frightening character, as the Schultz brothers find out.

Tatum and Ruffalo spent many months practicing their wrestling techniques, and it shows in the film. The grappling scenes are totally realistic, the body crunching you can feel from your seat. In the opening scene, Mark is practicing his moves with a weighted, human-shaped dummy --- fascinating to see --- and we are hooked.

Tatum gives an astonishing performance as the younger brother living in the shadow of his emotionally stronger sibling. It is a Channing Tatum miles away from his "Jump Street" and "Magic Mike" personas. His explosive scene in a hotel room is reason enough to consider him for a supporting Oscar nomination. He, too, is given a prosthesis, a right "cauliflower ear" that is almost double the size of his left.

"Foxcatcher" is a stunning achievement by Bennett Miller, who was named Best Director at Cannes 2014 for this film, which was also nominated for the Palme d'Or. Miller's resume includes "Moneyball" (2011), and "Capote" (2005), both Oscar nominees. Smartly written by E. Max Frye and Dan Futterman, "Foxcatcher", one of the year's best films, flies by despite its 2:14 running time.