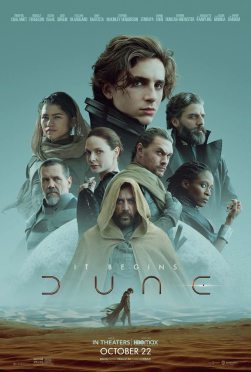 DUNE is one of those films whose success at the box office will NOT be influenced by critics’ opinions. It is true, however, that this long-awaited --- and very long in running time --- adaptation by Jon Spaihts, Eric Roth and Denis Villeneuve, who also directs, does already enjoy highly favorable reviews. None of this matters to the fans of Frank Herbert’s 1965 sci-fi thriller --- they will see DUNE despite anything that is written --- good or bad.

And DUNE is good --- spectacular, in fact. Unless you have been living under a rock, everyone knows Timothée Chalamet stars as Paul Atreides, son of Duke Leto Atreides (Oscar Isaac) and Lady Jessica (Rebecca Ferguson), the duke’s concubine. It’s a challenge for Chalamet because one false note from him could compromise all the efforts of so many. But, as we have come to expect, Chalamet is completely up to the task.

Set in the far distant future, DUNE, or as titled in the opening frame, DUNE: PART ONE, covers the first half of Herbert’s novel. Duke Atreides has been granted stewardship of the desert planet Arrakis, also known as Dune. Spice, a super drug which is vital to human life, is mined there. But it is an extremely dangerous planet, home to giant sandworms and the natives who live deep within the desert, known as the Fremen.

Atreides knows it’s a trap for him and his family --- he has no choice but to accept. Before their departure for the planet composed entirely of sand, Paul has been having a recurring dream in which he encounters a mysterious young woman. It is only later, after being betrayed by one of their own confidantes, that Paul meets Chani (Zendaya), the Fremen warrior from his dream.

DUNE has out-of-this-world --- pun intended --- production designs from Patrice Vermette, breathtaking photography courtesy of cinematographer Greig Fraser and a magnificent original score by Hans Zimmer. Our screening was in an IMAX theatre, so if you have that opportunity, please see it on IMAX. It will not disappoint.

For all the hype surrounding DUNE, this adaptation of Frank Herbert’s 1965 novel does not quite live up to the hysteria. Except for the presence of Timothée Chalamet in the lead role of Paul Atreides, and a convincing turn by Oscar Isaac as his father, Duke Leto Atreides, the current DUNE is somewhat of a letdown. It’s good --- just not great.

The film starts approximately 8000 years into the future, so from that aspect I was initially intrigued, especially in the IMAX format at our screening. But at 2:35 the movie is far too long. As for visual effects, we waited a long time to espy the dreaded sandworms, and when the time comes it is anti-climactic.

Chalamet has a screen attraction that should be envied by most young actors of his generation. He’s at his best when the writing challenges his talents, but in DUNE that is not the case. Yet he commands attention because of his youthful good looks. Isaac is convincing as the leader of his people and his character has the singular best visual effects moment when the duke exhales poisonous gas after biting down on a capsule embedded in his mouth.

DUNE showcases the fabulous efforts of production designer Patrice Vermette, and the music by renowned composer Hans Zimmer is spectacular. But as Jeanne alludes to in her review, it matters not what we say in this space because fans of the genre will flock to see it anyway.