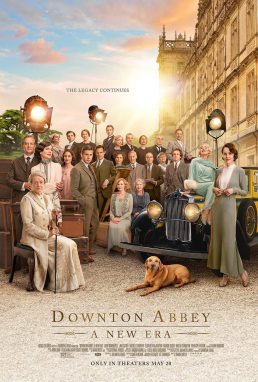 Rut roh --- the Dowager Countess Lady Violet Grantham (Maggie Smith) has unexpectedly inherited a stunning villa in the South of France. Now everyone at Downton Abbey is all atwitter about what it means --- and what she did to get it.

DOWNTON ABBEY: A NEW ERA begins in 1928 with the wedding of Tom Branson (Allen Leech) and Miss Lucy Smith (Tuppence Middleton), who we learned in DOWNTON ABBEY (2019) is the daughter of Lady Maud Bagshaw (Imelda Staunton). It’s a joyous occasion with everyone in attendance, including the Downton household staff.

Following the wedding --- and the announcement of the wildly generous gift from the late Marquis de Montmirail to Violet --- there is another bit of big news. Jack Barber (Hugh Dancy), a film director from the British Lion film company, has called Lord Robert Grantham (Hugh Bonneville) to request the usage of Downton Abbey as the setting for his next silent film, THE GAMBLER.

Robert is appalled but is quickly mollified after Lady Mary (Michelle Dockery) shows him the rather significant water leakage in the attic. A new roof is definitely in order and the fee from Barber will solve the problem.

To escape the turmoil the filming will cause, Robert, Cora (Elizabeth McGovern), Lady Edith (Laura Carmichael) and her husband, Bertie Hexham (Harry Haddon-Paton), along with Tom and Lucy, depart for the South of France to check out their newest piece of real estate. With Mr. Carson (Jim Carter) in tow, they sail off to meet the new Marquis de Montmirail (Jonathan Zaccaï) and his less-than-thrilled mother, Mme. de Montmirail (Nathalie Baye).

Left behind to cope with the film crew, Mary must help Barber find a way to save his movie after the studio decides it wants a talking picture instead. The two lead actors, Myrna Dalgleish (Laura Haddock) and Guy Dexter (Dominic West) aren’t totally prepared for speaking roles.

Watching all these wonderful actors is like being with old friends again. Through the regular series and the first film we’ve come to know and love them. And Julian Fellowes has given the fans of Downton Abbey a marvelous screenplay which includes all the ongoing sagas --- both upstairs and down.

DOWNTON ABBEY: A NEW ERA has it all --- great laughs, mostly courtesy of the Dowager, some tears and a satisfying conclusion to a glorious cast of memorable characters. No one plays haughty like Dockery, she’s sublime. Bonneville is exactly what one would expect as lord of the manor, and of course, there will never be  another head butler like Carson. Carter is hilarious --- and so darn pompous, especially when he’s melting away in the heat of the South of France. Every single cast member is important --- and perfect.

But it’s not only about the actors. The production designs by Donal Woods are breathtaking, especially the absolutely gorgeous villa set in the luscious Mediterranean. And there is everyone’s favorite, Highclere Castle, which has become synonymous with Downton Abbey itself. Having been to the castle myself, I can attest to its grandeur.

Let’s not forget about the exquisite costumes by designer Anna Mary Scott Robbins. Beginning with Lucy’s wedding gown, which is simply divine, and continuing with the wardrobes for France, the movie within the movie and Ms. Dalgleish’s couture wardrobe, it just doesn’t get any more glamorous.

The only disappointment was not seeing Matthew Goode again as Lady Mary’s husband, but thankfully it’s just a minor detail. If you are a true fan of this wondrous saga, DOWNTON ABBEY: A NEW ERA is as entertaining and delightfully engaging as you would hope.

Let’s get right to the point about DOWNTON ABBEY: A NEW ERA. The millions of loyal fans around the world will adore this sequel. Watching all our favorite characters again is like a family reunion but with people we (mostly) love.

When you consider the unique storyline of a film crew using Highclere Castle as its primary location for THE GAMBLER, coupled with the unparalleled writing of Julian Fellowes, it’s impossible not to be regally entertained by this movie. The catch is that THE GAMBLER is a silent film, but the talkies are right around the corner. The only downside watching this second Downton movie is Jeanne with her constant reminders that she was actually inside Highclere Castle. It would be totally annoying if she wasn’t so damn cute about it.

Everybody gets into the act in DOWNTON ABBEY: A NEW ERA. By that I mean Fellowes has adorned virtually every character with a memorable moment, sequence, or bit of special dialogue, including secondary characters like Mr. Molesley (Kevin Doyle). When the movie-in-a-movie is on its last legs, director Jack Barber (superbly played by Hugh Dancy) discovers a special talent of Molesley that saves the day. And our beloved Daisy (Sophie McShera) has a critical interlude with the rude starlet of THE GAMBLER, Myrna Daigleish (delightfully portrayed by Laura Haddock). Dancy and Haddock are joined in the “guest cast” category by Dominic West as the handsome movie star Guy Dexter, sending much of the servant staff into a serious swoon.

The movie opens with the wedding of Tom Branson (Allen Leech) and Miss Lucy Smith (Tuppence Middleton) who were last seen flirting at the end of the first movie, DOWNTON ABBEY (2019). Things grow much more serious when Violet Grantham (the astonishing Maggie Smith) announces she has inherited a villa in the South of France.

Direction by Simon Curtis and music by double Emmy winner John Lunn are flawless. This is simply a perfect movie production, except for the fact that Lily James and Matthew Goode are no-shows. However, because of so many unpredictable aspects that are in store for us, the title which includes “A NEW ERA” is completely accurate.

By the way, did I mention that Jeanne has been to Highclere Castle? The magnificent structure has been the home of the ancestors of the current occupants, the Earl and Countess of Carnavon, since 1679. That’s 343 years ago or approximately the number of times Jeanne has stated that she was actually --- oh, never mind.

DOWNTON ABBEY: A NEW ERA is a must see. You will laugh, you will cry, and you will hope it never ends.