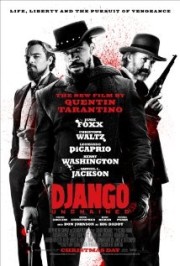 We all know Quentin Tarantino has a major penchant for violence. Up until now, it didn't bother me, though I did not see the "Kill Bill" trilogy. I was a big fan of "Inglourious Basterds", but, despite the fact that critics should not be influenced by current events (according to my illustrious partner), I cannot condone the off-the-charts gratuitous killing in "Django Unchained"!

Granted, the era of slavery in our country was an abomination, wrought with horrible, unspeakable offenses that Tarantino manages to capture in his film. But the gunplay is overwhelming to the point of unbearable.

Jamie Foxx is Django, a slave being transported along with several others by two nefarious characters. Dr. King Schultz (Christoph Waltz) appears out of nowhere, looking for the slave who may know/recognize the Brittle brothers, who have a bounty on their heads. It turns out Dr. Schultz is a very successful bounty hunter and he offers Django his freedom if he can help find and kill the brothers.

What Dr. Schultz doesn't know is Django has a wife, Broomhilda (Kerry Washington) whom he wants to find. After a treacherous journey and much bloodshed, they arrive at Candyland, the plantation owned by Calvin Candie (Leonardo DiCaprio), a sadistic bastard with a charming smile. It is here that all hell breaks loose --- resulting in an excessive, obnoxious massacre.

Even if it weren't for the recent horrific event at Newtown, Connecticut, this movie is WAY over the top! According to Tarantino, "tragedies happen, blame the playmakers. It's a western, give me a break." All well and good, Mr. Tarantino, but I simply cannot give you or Hollywood a pass on this. Violence is violence ---

and the gratuitous gun violence depicted here is unacceptable and deplorable.

I am not naive. I realize that this may or may not have any influence on the perpetrators of these crimes, but let's at least take some responsibility. I would have loved this film had it not been for the inordinate blood-and-guts.

Seriously, DiCaprio is magnificent in this role. He is incredibly adept at being charming and evil at the same time. It's a performance worthy of an Oscar. Also Waltz, who is equally disarming and very funny, could be considered come the nominations.

Many will revel in Samuel L. Jackson's turn as Candie's number one slave, Stephen, who basically runs the joint. He has Candie's ear at every turn, guiding Master Candie in all of his decisions. Truly Jackson gives one of the best performances of his career, but, at what price?

The ending of Tarantino's latest is a bloody, violent mess. I was horrified at the time, but dismissed it as just "being Tarantino". Now, I'm distressed that I wasn't more horrified. Each and very one of us must reflect on what has happened, and take a stand one way or the other. Hollywood has got to clean up its act --- and that goes for you, Mr. Tarantino!

Quentin Tarantino, with his latest blood-filled shoot-em-up, "Django Unchained", has probably surpassed Sam Peckinpah as the Hollywood maven for movie violence. Yet Tarantino always manages to provide an entertaining and intriguing story to go along with his pretend mayhem. Three years after the glorious "Inglourious Basterds", the 49-year-old actor-writer-director has brought together A-listers Jamie Foxx, Samuel L. Jackson, Leonardo DiCaprio, and

yes --- let's include Christoph Waltz in that category, as well --- to the big screen.

It's over-the-top violent --- Tarantino fans wouldn't have it any other way, of course ---  and it comes at a very bad time, as Americans are struggling with a gun-happy society. But there's no denying that "Django Unchained" is a lot of fun.

It starts with Waltz as Dr. King Schultz, a bounty hunter who promises to free a slave named Django (Foxx) as long as he assists him in the tracking of wanted criminals. Only Django knows what they look like, so his help is invaluable to Schultz. Django has an agenda, as well, to find his wife Broomhilda (Kerry Washington, reuniting with Foxx after "Ray" in 2004) who was swallowed up by the slave trade, whereabouts unknown.

Meanwhile, the German-born Schultz, early on, appears to be in over his head, on the verge of being arrested, or worse. But his quick wit overcomes nearly all

obstacles --- a role reminiscent of Waltz' Oscar-winning turn in "Basterds".

The time is 1858, two years before the start of the Civil War, and slavery is rampant. Even Don Johnson makes a gem of an appearance as a slave owner.

Eventually Schultz and Django visit the lavish plantation of Calvin Candie (DiCaprio), a wealthy slave owner (they're everywhere in 1858) whose demeanor gets meaner the longer the pair of bounty hunters stick around. It's as good a performance from DiCaprio as any in his illustrious career. He is overdue for an Academy Award, and I believe he should be the front runner, with all due respect to Phillip Seymour Hoffman ("The Master"), for Best Supporting Actor.

Samuel L., in his third collaboration with Tarantino, almost steals the show as Candie's elderly house slave, Stephen. It's a priceless turn for Jackson, one that grew on me as the film moved on. As for Foxx, Best Actor winner for "Ray", he is perfectly fine as Django. He is just overshadowed here by the other three stars.

"Django Unchained" represents a project that Tarantino started over 10 years ago. If a little bit --- okay, buckets --- of spilled fake blood are not odious to you, this is a hugely entertaining movie.