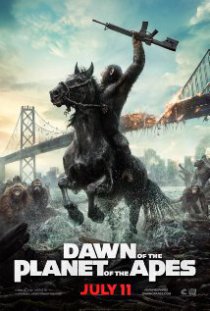 The most notable aspect of "Dawn of the Planet of the Apes" is the brilliant performance capture utilized in bringing Caesar (Andy Serkis) and his clan of extremely intelligent apes back to the big screen. In 2011 Fox experienced a surprise commercial and critical success with "Rise of the Planet of the Apes", and they are looking to duplicate that effort with "Dawn".

It has been 10 years since the uprising of the apes and a devastating Simian Flu destroyed most of Earth's population. Caesar and his wife Cornelia (Judy Greer) have two sons, River (Nick Thurston) and a precious newborn. The community of apes has established a comfortable lifestyle north of San Francisco. Humans haven't been seen or encountered in these past 10 years, though the population is constantly wary, and, of course, the unfortunate surprise meeting of a group of humans and two of the apes has disastrous consequences.

Despite the heroic efforts of Caesar and Malcolm (Jason Clarke), one of  the humans tasked with exploring a dam to provide lights to the colony of survivors residing in San Francisco, conflict arises between the apes and humans. Touched off by Koba (Toby Kebbell) and fueled by the ever-fearful Dreyfus (Gary Oldman), a major confrontation looms.

Director Matt Reeves' vision for "Dawn" is exemplary. It is beautifully photographed by Michael Seresin and edited by William Hoy and Stan Salfas. The CGI and 3-D effects showcase this new world of post-destruction and new beginnings in astounding ways. One of the most startling scenes brings to our attention how many little things we miss without electricity. When a partially destroyed and overgrown Union 76 gas station is restored to power, watching Malcolm and the others rejoice in hearing music again is a nice touch in this deprived realm of existence.

Because the dialogue between the apes is limited, screenwriters Rick Jaffa, Amanda Silver and Mark Bomback manage not to screw up their thoughts and words too much. Unfortunately, where the humans are concerned, the writing is pretty atrocious. Trite lines are abundant, with not a decent string of dialogue present. But fans don't go to see these movies for the script --- they go for the action, and there is plenty of that! In fact, about 10-15 minutes too much, mostly in the beginning and middle of the film.

At least, for once, the fight scenes don't last forever. My favorite is the major battle between Caesar and Koba --- it's very well choreographed and terrifically exciting.

"Dawn of the Planet of the Apes" is a real crowd-pleaser. It will be the second huge box office hit of the summer --- maybe even surpassing "Transformers" in numbers --- we'll just have to wait and see.

At the conclusion of "Rise of the Planet of the Apes" (2011) , Caesar, the ape who was raised by a human, and who is now the leader of a large group of his race, manages to utter a full sentence in English. This startling moment in the fictional progress of simians has fully blossomed in the sequel "Dawn of the Planet of the Apes", where the apes communicate primarily with sign language, but also carry on verbal conversations with humans and each other.

If this sounds like a rather incomprehensible development for a movie, keep in mind that's why they label it science fiction. Besides, it is performed so skillfully, and with sufficient moderation, that we buy it as fact.

After all, In 1968's "Planet of the Apes", the film which started it all, the simian populace all spoke perfect English, albeit with rubber masks and other somewhat cheesy effects. According to director Matt Reeves, the current rebirth of ape films is leading up to that distant future when astronaut George Taylor (Charleton Heston) discovers the truth about civilization, exemplified by the havoc wreaked upon the Statue of Liberty.

Meanwhile, "Dawn" features an astounding achievement in performance capture technology by Weta Digital, the New Zealand-based company directed by multiple Oscar winner Joe Letteri. He and his large crews were stationed in the rain forests of British Columbia, to make this film (New Orleans was also a venue), and the resulting finished product is jaw-dropping on screen.

The movie opens with apes running wild through the forest, foraging for food and hunting caribou, while a few of them are locked in a deadly battle with a Grizzly bear. They sign with each other while the audience reads subtitles. There is no spoken dialogue, a refreshing change.

We learn that a deadly virus that started 10 years earlier has wiped out much of the world's human population. Misnamed the Simian Flu, the real cause of the virus was human error in labs experimenting with apes, but, of course, the apes get the blame.

In these opening scenes, with eye-popping cinematography by Michael Seresin, there is no sign of humans until a man named Carver (Kirk Acevedo) appears, much to the dismay of ape and human. He draws a gun, and so one of the film's villains is established as the conflict begins. Carver is soon joined by more humans, led by Malcolm (Jason Clarke), who tries to reason with the apes, and who eventually gains the trust of Caesar. It is the wise Caesar who later opines to another ape that "we are just like them", thus the film's message is clear.

Andy Serkis returns as the embodiment of Caesar, and it is a sensational performance. Serkis and other actors portraying apes have us believe that they are real animals living in their natural habitat. This latest technology allows the apes to exhibit a wide variety of facial expressions, down to the slightest hint of a smile, and even a tear.

The movie bogs down only when the human actors, notably Gary Oldman as Dreyfus, the leader of a small group of survivors in a decimated San Francisco, appear on screen in cliched situations. Oldman is not very convincing in the role, basically going through the motions. His character is fearful of the apes, and does whatever he can to undermine Malcolm's efforts at a peaceful coexistence.

I would have liked deeper emotional involvement between ape and human, as when Malcolm's love interest, Ellie (Keri Russell), a nurse, is cuddling Caesar's baby. It's a tender sequence that doesn't last long enough. The most touching scene occurs later when Caesar and Malcolm express their mutual friendship and trust, even though the two sides are on the brink of a full-scale war

Despite the film's predictability, it is still a very entertaining experience. But I'm not convinced that the movie-going public will embrace more of the same once the novelty wears off.