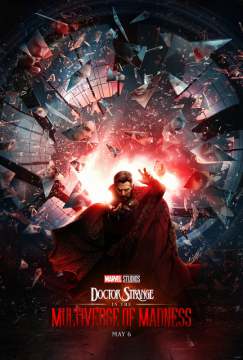 This is madness, alright! Helmed by Sam Raimi, who directed the wildly successful “Spider Man” trilogy, DOCTOR STRANGE IN THE MULTIVERSE OF MADNESS catapults Marvel Cinematic Universe (MCU) fans through the Multiverse as Dr. Strange (Benedict Cumberbatch) and Wong (Benedict Wong) scramble to save newcomer, America Chavez (Xochitl Gomez), from the clutches of The Scarlet Witch (Elizabeth Olsen).

The film begins with Dr. Stephen Strange embattled in a dream where he meets the as-yet unknown America Chavez. Upon awakening, he dresses for the wedding of his one-time paramour, Dr. Christine Palmer (Rachel McAdams), whom he still loves. While at the reception, a commotion in the streets of New York City draws everyone’s attention including Dr. Strange.

He flies into action to protect New Yorkers from Gargantos, a rather large monster who’s trying to capture the teenaged America so he can steal her power. Dr. Strange recognizes her from the night before, which America explains was not really a dream. She has the ability to open doors from one universe to another but hasn’t figured out yet how exactly it happens. As she travels to alternate universes with Dr. Strange and Wong, America slowly learns to harness her power.

DOCTOR STRANGE IN THE MULTIVERSE OF MADNESS is one crazy, dangerous and frightening journey made even more so by the fabulous soundtrack courtesy of Danny Elfman. A plethora of scary creatures abound, along with some interesting characters loyal MCU afficionados will be thrilled to see. The special effects are over the top, and in some instances, downright breathtaking. Per usual, the list of credits at the end reads like a novel --- there are just so many people responsible for these insane efforts.

But without Cumberbatch as the wily Dr. Strange and Wong as his faithful partner, DOCTOR STRANGE IN THE MULTIVERSE OF MADNESS would simply be another superhero movie. This is now Cumberbatch’s fourth appearance as the Earth’s mightiest sorcerer, and he captures the madness of his character and dire situations with skills so few actors possess. His self-assurance in the role is amazing --- he’s incredibly sly, a little bit wicked and hugely amusing.

Wong, who is now Sorcerer Supreme, is played with great panache by Benedict Wong. He exhibits terrific chemistry with Cumberbatch --- and with Gomez, who is absolutely fantastic as the new addition to the MCU list of characters. She truly holds her own in her scenes with the three heavies, Cumberbatch, Olsen and Wong.

David and I have a real soft spot for Elizabeth Olsen. We met her many years ago when she was promoting MARTHA MARCY MAY MARLENE (2011). She was totally delightful and charming, so we have remained big fans. She was so spectacular as Wanda Maximoff in “WandaVision”, and continues with a bravura performance here, becoming The Scarlet Witch with such an overwhelming ferocity. She’s sensational.

As you may recall, David is not really a true admirer of this genre. But he did manage to stay awake, primarily due to Ms. Olsen’s presence. Not that we really need to remind anyone, especially the real MCU lovers, but be sure to stick around through the entire list of credits --- you won’t be disappointed.

DOCTOR STRANGE IN THE MULTIVERSE OF MADNESS is the 28th picture in the Marvel Cinematic Universe but it’s also the first MCU movie to be designated a horror film. That is a direct result of veteran director Sam Raimi at the helm, known for his achievements in that genre. This is also the first time in his 41-year career that he took on what is called a “possession credit” with the caption “A film by Sam Raimi”.

A marvelous cast --- including cameos that cannot be revealed in a review --- jaw dropping special/visual effects, and incredible set designs make this an effort that will challenge the biggest of the MCU’s blockbusters for gross proceeds. In addition to established favorites Benedict Cumberbatch (Dr. Stephen Strange), Elizabeth Olsen  (Wanda Maximoff/Scarlet Witch), Rachel McAdams (Dr. Christine Palmer), among others, a young newcomer to the MCU is Xochitl (pronounced So-Chee) Gomez. She plays America Chavez who has the ability to travel freely in the Multiverse, claiming to have been in no less than 72 universes.

She proves to be a valuable comrade to Dr. Strange as he comes face to face with other versions of himself in the Multiverse. By the way, speaking of value, the doctor’s cleverly enhanced cloak --- don’t call it a “cape” --- is one of the better special effects.

The opening sequence in New York City is something else. It features Dr. Strange and others battling a giant octopus-like monster called Gargantos, a one-eyed mammoth of a creature bent on destroying everything in sight and capturing the teenager, America. To replicate NYC the filmmakers constructed four blocks of streets, each 50 feet in length.

Despite all the action sequences in Raimi’s film, the overriding suggestion is that love truly conquers all. As a mother to her two adorable boys (portrayed by Jett Klyne and Julian Hilliard), Wanda is desperate to stay with them. Her alter ego, The Scarlet Witch, is the polar opposite, bent on destruction of her own.

There is sufficient humor in the screenplay by Michael Waldron --- much of it provided by Cumberbatch’s character --- to prevent this movie from taking itself too seriously. And to punctuate that point, you may want to sit through the thousands of credits to see that validated. Jeanne probably has written that I stayed awake for this film and that is mostly true. Although DOCTOR STRANGE IN THE MULTIVERSE OF MADNESS runs slightly over two hours, that is significantly shorter than a typical MCU movie.