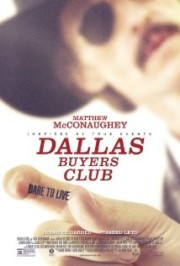 If Matthew McConaughey is not nominated for a Best Actor Oscar, then there is truly no justice in this world. Much ado was made about the very in-shape McConaughey losing nearly 50 pounds for this role as Ron Woodroof, a real-life Texas cowboy afflicted with HIV in 1985.

Ron is as homophobic as one would expect a rodeo rider and electrician in 1980's Texas. He's 35 and in the midst of his normal shenanigans, antagonizing his police officer brother Tucker (Steve Zahn), and having indiscriminate sex with every female within reach. He is weak and rundown, but it never occurs to him that something serious could be wrong until he ends up in a hospital with a diagnosis of HIV positive, and only 30 days to live.

After the initial shock that he could possibly have "that gay disease", Ron goes into overdrive, learning everything he can about current treatments and medications. What he finds is that the U.S. has a distinct lack of approved medicines, so he travels across the border to an AIDS clinic in Mexico, run by an American, Dr. Vass (Griffin Dunne), who is administering experimental drugs for the AIDS virus.

Ron and Vass team up to bring these pharmaceuticals to the U.S., which inspires Ron's entrepreneurial spirit. Along with his transsexual HIV positive bedmate, Rayon (Jared Leto), from the Dallas hospital where he was first diagnosed, Ron begins supplying other infected patients with these non-FDA approved treatments.

Ron eventually opens a "club" to circumvent various governmental obstructions. Learning from similar groups in other large cities, Ron and Rayon charge their clients a club membership, which enables them to get their drugs --- hence the Dallas Buyers' Club.

We've all seen actors change themselves drastically for various roles. Tom Hanks, Natalie Portman and Anne Hathaway all dropped a great deal of weight to portray certain characters and won Oscars for their efforts. McConaughey now joins that

"club" --- which will place him in serious contention for Best Actor.

But it isn't just about the alteration of appearances, though McConaughey barely resembles his uber-handsome/sexy self of People Magazine's: The Sexiest Man Alive (2005). He's had a string of outstanding performances in the last few years, such as "The Lincoln Lawyer", "Bernie", "Killer Joe", "Magic Mike" and "Mud". What was once considered only a pretty face (and killer body) is now one of the best actors around.

He embodies Woodroof, having spent a great deal of time listening to audio tapes of the real, bigger-than-life wheeler and dealer. We never for an instant doubt McConaughey's sincerity in his effort to showcase the drive and tenacity which defined Woodroof in his goal to lead a prolonged and productive life.

Helping McConaughey's cause is Leto, a complete wonder as Rayon. He, too, lost weight --- 30 pounds --- to bring this tragic transsexual to life. Woodroof was a self-proclaimed homophobic, but Rayon manages to change his opinions drastically. Their relationship is pivotal to the success of their business venture, but it is also paramount to their ability to survive.

Leto, like McConaughey, is simply brilliant --- at once heartbreakingly beautiful in his trashy get-ups --- then just heartbreaking, period. They are both stellar portrayals, with Leto a cinch to secure a Best Supporting nod at Oscar time.

Jennifer Garner has a nice turn as Dr. Eve Saks, Woodroof's physician, who goes to bat in his defense of using unapproved drugs. It's not a very difficult role, as screenwriters Craig Borten and Melisa Wallack give her next-to-nothing to do.

Directed by Jean-Marc Vallee, the obvious main focus of "Dallas Buyers Club" is Ron Woodroof and his crusade for self-preservation. You simply won't see a better performance from another male actor this year.

Based on a  true story, "Dallas Buyers Club" chronicles the life of Ron Woodroof, a cocky electrician and rodeo enthusiast who flaunts a life style of booze, drugs and women. It all comes crashing down when he learns he is HIV positive and is given 30 days to live. But he doesn't lie down and wait to die --- he takes extraordinary action, which translates into one of the best movies of the year.

Matthew McConaughey plays Woodroof, and thanks to a regimen of diet coke, egg whites and chicken, he lost upwards of 40 pounds for the role. We thought McConaughey had a shot at an Oscar nomination for "Mud", but his performance in "Dallas Buyers' Club" practically guarantees it.

He is ably supported by Jared Leto as Rayon, a transgender who befriends Woodroof, becomes his business partner, and eventually is responsible for changing the homophobic Woodroof's attitude towards gays. Leto is no stranger to bodily changes for a movie role, as he lost 30 pounds for this film, 28 pounds for "Requiem for a Dream", and gained an astonishing 62 pounds to portray Mark David Chapman, John Lennon's murderer, in "Chapter 27". Leto is so good as Rayon --- he makes for a really beautiful woman --- that he also has a decent chance for an Oscar nomination as Best Supporting Actor.

When Woodroof finds that his use of the drug AZT is detrimental to his health, not to mention his pocketbook, he travels to Mexico, meets expatriate physician Dr. Vass (Griffin Dunne), and is educated on alternative treatments and medications that are not approved in the U.S. He ends up smuggling them into the country and establishes a system where AIDS victims pay a $400 monthly dues to receive whatever meds they need. It becomes so lucrative that federal officials attempt to shut down the buyers' club, and prosecute Woodroof, as well. McConaughey always shines in roles where he faces a confrontation, and this is no exception.

At times difficult to watch, "Dallas Buyer's Club" is a must see for McConaughey's performance alone. We've said it before --- he has developed into one of our finest actors, not shying from controversial roles. His earlier career consisting of fluff films seems like ancient history.

Jennifer Garner plays Dr. Eve Saks, Woodroof's friend and physician whose own career is endangered by her association with Woodroof. Garner is underrated as a serious actress --- she's very effective here, and it is a nice rebound from her last movie, an embarrassing  turn in the awful "The Odd Life of Timothy Green".

While there are reportedly some historical inaccuracies in this film ---- Woodroof was not a rodeo rider, for example, although he is shown riding a bronco ---- director Jean-Marc Vallee ("The Young Victoria", 2009) and the writers, Craig Borten and Melisa Wallack, supposedly elected to spice up the story to make it more entertaining.

McConaughey has plenty of company in Hollywood when it comes to weight loss to fulfill a role. Christian Bale lost 63 pounds for "The Machinist", Russell Crowe the same amount for "Body of Lies". Matt Damon shed 40 pounds for "Courage Under Fire" and added 30 for "The Informant". Michael Fassbender lost 42 pounds for "Hunger".

The most notorious weight shift of all saw Robert DeNiro gain 60 pounds for his Oscar-winning portrayal of boxer Jake LaMotta in "Raging Bull".

But McConaughey fans do  not despair. The handsome actor is again his buff self for his latest role in the upcoming HBO series "True Detective", co-starring Woody Harrelson.