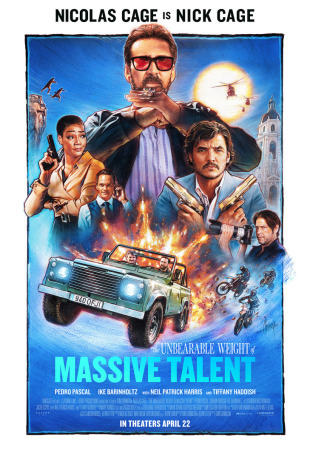 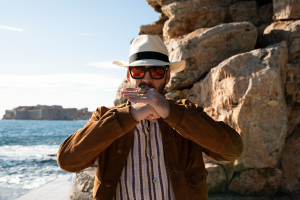 Jeanne: Nicolas Cage playing a version of himself, Nick Cage, in THE UNBEARABLE WEIGHT OF MASSIVE TALENT is one of the funniest films released in a very long time. And the best part is Mr. Cage seems to be having the time of his life in this new effort.

Depressed about the state of his career, Nick takes lunch at Chateau Marmont with a well-known Hollywood director who’s looking to cast the lead role in his new movie. Nick is desperate to get the part and even offers to read for it. Much to the director’s chagrin, Nick goes into an audition --- terrible Boston accent, et al --- as the poor guy is trying to get into his car.

Needless to say, Nick doesn’t get the job, so he settles for a payday of one million dollars arranged by his agent, Richard Fink (Neil Patrick Harris). All he has to do is fly to Mallorca, Spain for the birthday bash of one of his biggest fans, Javi Gutierrez (Pedro Pascal).

What he doesn’t know is Javi is the ruthless kingpin of a drug cartel who recently had the daughter of the president of Catalonia kidnapped. Upon Nick’s arrival in stunning Mallorca, he is contacted by two CIA agents, Vivian (Tiffany Haddish) and Martin (Ike Barinholtz), who impress upon him the fact that he is the only one who can find out where this young woman is being held on Javi’s compound.

But as Nick and Javi bond over their love of movies --- and Nick Cage --- he finds it increasingly difficult to believe that Javi is who they think he is. Vivian and Martin convince Nick to remain in Mallorca after the party to continue his search --- and Javi has the bright idea of bringing Nick’s wife, Olivia (Sharon Horgan), and their 16-year-old daughter, Addy (Lily Sheen), to Spain to help Nick reconnect with Addy. 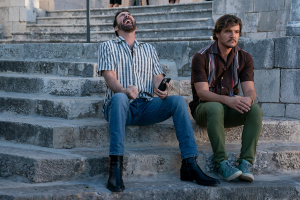 There are so many hilarious scenes beginning with Javi  himself picking Cage up at the airport. He thinks Javi is the chauffeur and begins pumping him for information about his host. From there they go cliff diving --- literally --- in a scene reminiscent of BUTCH CASSIDY AND THE SUNDANCE KID, only a much, much higher descent. Yikes!

Javi even has an entire room dedicated to Nick and his film memorabilia, replete with a full wax figure, which Nick promptly tries to buy for $20,000. It borders on creepy and that’s half the fun --- how obsessed both of them are with Nick Cage.

Horgan is totally delightful as Nick’s frustrated spouse --- she’s so perfectly cast. Sheen makes a truly believable 16-year-old who absolutely wants to die when her father shows up smashed at her birthday party. Her horrified facial expressions are priceless and comedy gold.

If all of this isn’t wild enough, Nick’s crazy, de-aged alter ego, Nicky, shows up from time to time to remind him that he’s a big movie star and needs to get back on track. THE UNBEARABLE WEIGHT OF MASSIVE TALENT is a very fun romp. Cage has never been better, especially because he and screenwriters Tom Gormican, who also directs, and Kevin Etten are letting us in on the gag. No one in any way is making fun of this extremely versatile actor, instead the entire point of THE UNBEARABLE WEIGHT OF MASSIVE TALENT is to celebrate Cage and his wide range of memorable movies.

As much as I enjoyed watching him, I have to admit that Pascal is every bit as entertaining. It’s not easy to steal scenes from an actor like Cage, but Pascal manages to do just that. This has to be one of the best pairings in filmmaking history. Pascal was already a devoted fan of Cage, and together they complement one another perfectly.

As David and I have so often opined, writing a really good comedy is very difficult. Gormican and Etten have managed quite successfully with THE UNBEARABLE WEIGHT OF MASSIVE TALENT. 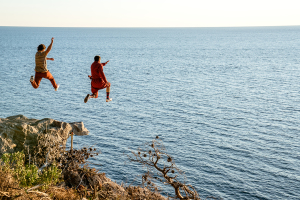 David:  Outside of his recent movie PIG, Nicholas Cage has not received many plaudits for his acting or choice of roles of late. In 2014 there was the lamentable LEFT BEHIND with a convoluted plot about the Rapture. This was billed as a drama but proved to be so bad it turned into an unintended comedy.

But if the 58-year-old actor was ever viewed as washed up, I’m happy to report that Nicolas Cage is alive and well --- he is definitely back. The consistently funny and original comedy with the unwieldy title of THE UNBEARABLE WEIGHT OF MASSIVE TALENT is a showcase for Cage’s assured affability on screen. Co-writer and director Tom Gormican, in only his second feature-length effort, has created a real winner, along with writing partner Kevin Etten.

Cage not only portrays a character named Nick Cage, a presumably over-the-hill actor, but also plays opposite himself in several scenes as Nicky, his alter ego who looks like Cage in earlier movies. This picture has a lot going for it, including the importance of family as demonstrated by Nick’s wife Olivia (Sharon Horgan) and daughter Addy (newcomer Lily Sheen).

MASSIVE TALENT is rated “R” partially for its use of language. F-bombs are dropped frequently and at random, but never funnier than uttered by Ms. Horgan. I generally leave the synopsis of our reviews to Jeanne but trust me --- this movie is fun and entertaining from start to finish. We can even forgive some of the goings-on that stretch the imagination because they’re not enough to disrupt the movie’s flow or elicit groans.

When Nick travels to Mallorca, Spain to be the guest of honor at Javi Gutierrez’ (Pedro Pascal) birthday party, the two bond in a variety of ways. Nick rejects Javi’s original screenplay, but decides he wants to make a film with Javi. Nick seeks a nuanced, performance-based script and not a run-of the-mill action flick. But the irony in MASSIVE TALENT is that the finished product is just that, including a wild car chase through the streets of Mallorca. 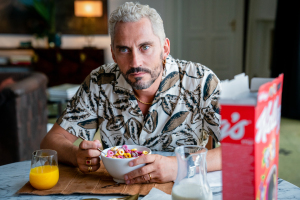 Pascal practically steals the show in MASSIVE TALENT as a reputed drug kingpin. His character is genuinely likeable despite the fact that the CIA is after him for, among other things, kidnapping the daughter of the president of Catalonia. Agents are played hilariously straight-faced by Tiffany Haddish and Ike Barinholtz. Pascal, as “The Mandalorian”, was always wearing a helmet, but as Javi he displays a treasure trove of facial expressions opposite Nick.

Neil Patrick Harris has some very funny deadpan lines as Nick’s agent, Richard Fink. Paco León is another scene stealer as Lucas, Javi’s cousin and very scary partner in crime even though he loves Fruit Loops. A couple of unexpected surprises add to the fun. So, if you’re looking for a solid escapism movie that doesn’t wear out its welcome at a crisp 107 minutes, THE UNBEARABLE WEIGHT OF MASSIVE TALENT is highly recommended. 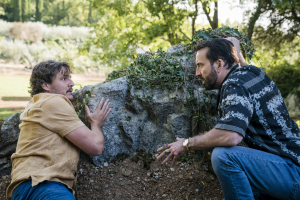