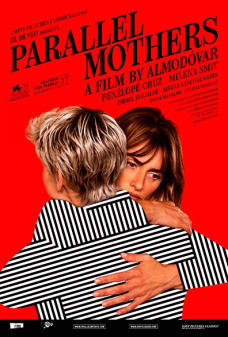 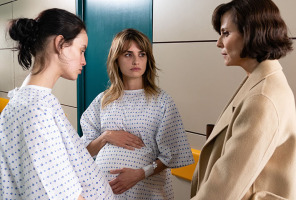 Jeanne: The brilliance of filmmaker Pedro Almodóvar never ceases to amaze. In his latest effort, PARALLEL MOTHERS, he takes on the lingering horror of war and the complications of motherhood.

When the film begins, Janis (Penelope Cruz), a highly sought-after professional photographer is shooting photos of Arturo (Israel Elejalde), a politically connected activist who has the resources to help Janis. She has been petitioning the Spanish government to open a mass grave where her great-grandfather and others were buried during the Spanish Civil War. Arturo is the only one who can make that happen.

Janis, named after Janis Joplin, is almost 40, so when she learns she is pregnant --- definitely not planned --- she is thrilled. Her roommate at the hospital where she’ll be giving birth is a teenager named Ana (Milena Smit) who is decidedly not happy about her predicament. During their time together, Janis tries everything to infuse Ana with confidence and excitement.

Both Janis and Ana have girls, and each is a single mother. Ana’s own mother, Teresa (Aitana Sánchez-Gijón), is no help. Her maternal instincts are nearly non-existent. She has always wanted to be an actress, so when her first big break comes along, she leaves Ana and her baby alone with the maid and takes off. 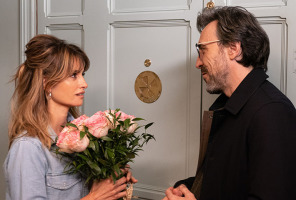 Almodóvar has such a distinctly unusual way of telling a story. And his screenplays are always complicated and dramatic. PARALLEL MOTHERS is certainly no different as we watch Janis navigate her dilemma, eventually coming to the right --- and moral --- decision. And in the end, Janis is rewarded with the excavation of the grave she so valiantly struggled to get opened.

Almodóvar is of the opinion that Janis is “the most difficult character that Penelope Cruz has played to date”. He should know as he has given her the most challenging roles, and she is extraordinary as Janis. It’s a very tricky portrayal because this new mother with a secret could easily come off as a monster. Cruz, under the expert tutelage of Almodóvar, never lets that happen.

Janis’ relationship with Ana is deeply complex, and both women are equally up to the task. Some of their scenes are so tense, we’re not sure what is going to happen next, which is true to Almodóvar’s creations. And which accounts for his brilliance as a filmmaker.

As with all his films, PARALLEL MOTHERS provides the audience with thoughtful, well-constructed character studies. It’s a marvelous addition to Almodóvar’s already storied collection. 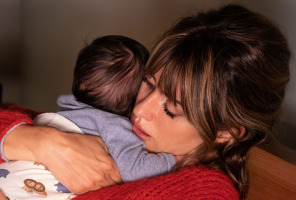 David: Spanish director Pedro Almodóvar is no stranger to American audiences. His list of accomplishments --- including Academy Awards, Baftas, Golden Globes, even an honorary degree from Harvard --- is staggering. His latest film which he also wrote --- PARALLEL MOTHERS --- stars his frequent collaborator, Penelope Cruz. This movie is their sixth together.

Almodóvar has a knack for presenting stories of the human condition which are heartfelt and complicated. In PARALLEL MOTHERS, he examines the relationship between two pregnant women, one of whom, Janis (Cruz), is excited about the birth of her baby, and the other, Ana (Milena Smit), is quite the opposite.

A side adjunct to this plotline, but equally gripping, is the desire of Janis to have the mass grave excavated where her great-grandfather is believed to be buried. He and many others were murder victims of the fascist regime of Francisco Franco during the Spanish Civil War, and families want closure and a proper burial. Assisting Janis in this endeavor is Arturo (Israel Elejalde), an archaeologist who also is determined to be romantically linked with the beautiful Janis. 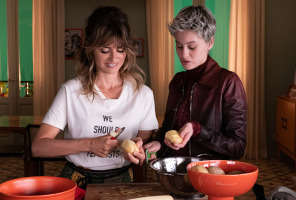 Cruz is phenomenal in the role of Janis. She already has one Oscar for the Woody Allen-directed VICKY CHRISTINA BARCELONA, and who knows? She has come close before in several of Almodóvar’s pictures, so at the risk of sounding like a stuck record, Cruz could join the incredibly talented ladies of 2021 whose performances are Oscar-worthy. And of course she benefits from playing opposite a fine turn by Smit.

There is a major twist involving the two new mothers and it is not difficult to predict. However, the intrigue as to how it will play out is sufficiently thought-provoking. And the final shot from Almodóvar’s camera at the sight of the mass grave is an image that is not easy to forget. It’s a stunner.

PARALLEL MOTHERS is one of Pedro Almodóvar’s finest films, and that is saying something. 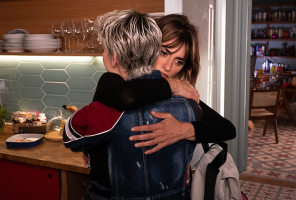