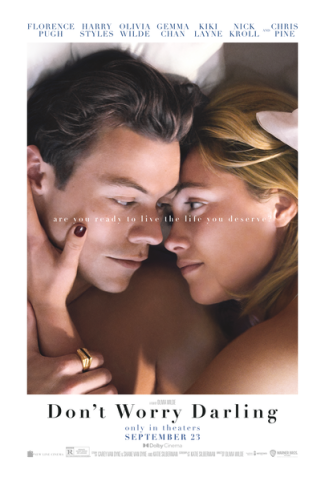 Jeanne: The stylish thriller DON’T WORRY DARLING has everything required in a film of this genre except the one thing it needs the most --- a gripping screenplay. Director Olivia Wilde’s sophomore exercise has definitely received its fair share of press --- not all good or bad --- whetting the public’s appetite, but unfortunately the clumsy storyline and ridiculous ending won’t help win over many fans.

Who wouldn’t want to live in Victory? A mid-century desert mecca, a la Palm Springs, Victory is a company town for the men who work for Frank (Chris Pine) and their families. It has everything you could possibly want --- and more --- as long as the residents maintain their discretion and full-fledged commitment to Victory’s ideals.

Some of those lucky enough to live and work in this community are Jack Chambers (Harry Styles), his devoted wife, Alice (Florence Pugh), their next-door neighbors, Bunny (Wilde) and Bill (Nick Kroll) and the token Black couple, Margaret (KiKi Layne) and Ted (Ari’el Stachel). But soon cracks in this utopian society begin to fester.

Margaret is the first to notice that all isn’t as it seems. Then as Alice watches what happens to Margaret, she begins to question what exactly is the Victory Project that Jack and the rest of the husbands spend their days toiling over --- and who precisely is Frank --- and his beautiful wife, Shelley (Gemma Chan)? 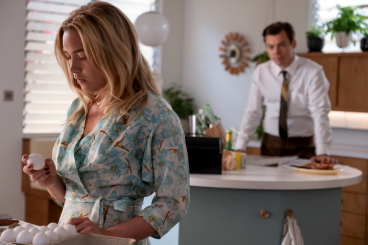 The premise of DON’T WORRY DARLING is an interesting one. Too bad the story by Carey Van Dyke, Shane Van Dyke --- grandsons of Dick Van Dyke --- and screenwriter Katie Silberman doesn’t flesh out enough of the potential horror which could be associated with a community beholden to one crazy, obsessed individual.

At every turn, the psychological thriller aspect of DON’T WORRY DARLING is reduced to a mere shiver. Even the car chase scene with Alice behind the wheel of a 1962 C1 Corvette is a snooze. The cars in DON’T WORRY DARLING are fabulous, especially Jack’s black classic Thunderbird --- but I digress.

And therein lies the rub. Wilde has assembled a masterclass in production. DON’T WORRY DARLING is gorgeous to look at with stunning sets by Katie Byron, beautiful costumes by Arianne Philips and luscious cinematography from Matthew Libatique. Add to all this the black-and-white Busby Berkeley numbers, the incorporation of all things 1950, including the music, and DON’T WORRY DARLING should be one terrific movie.

As I’ve written many times in the past, none of this matters if the script isn’t worth the paper it’s written on. Not even the stellar performance by Pugh can save DON’T WORRY DARLING. 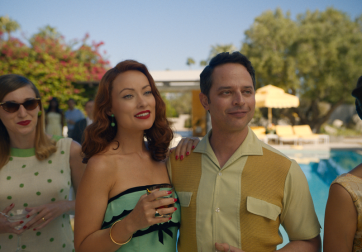 David:  When Jack Chambers (Harry Styles) returns home from work, his pretty wife Alice (Florence Pugh) has a drink ready for him before he can doff his suit coat. They gaze into each other’s eyes briefly, then engage in sex as if it’s their first time. After removing his tie, she leans back on their dining room table, sweeping most of the dinner plates onto the floor, while he –-- oh, just use your imagination.

This is just one example of the apparent idyllic life the Chambers enjoy. They live in an elegant 1950’s style home while their cul-de-sac is inhabited by other couples who appear to also love their lifestyle. They all indulge in drinking with their friends and having a rousing good time.

The men all leave their driveways at exactly the same time enroute to their jobs at Victory Project. This is a secretive company --- the wives have no idea what their spouses do there --- led by Frank (Chris Pine) who appears to be much more than just a talking head for his firm. 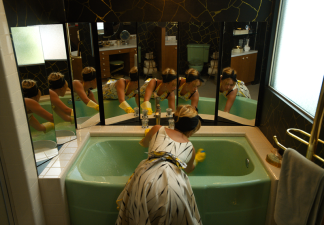 Such is the set-up for DON’T WORRY DARLING. Directed by and co-starring Olivia Wilde (she plays Bunny, at times a regretful mother of two small kids), this is her follow-up feature film after her debut with BOOKSMART in 2019. The obvious comparison to THE STEPFORD WIVES (1975 and 2004) may not sit well with some viewers, but Wilde’s film is stylish and features good acting all around.

Especially compelling are Pugh and Styles, while Wilde herself and Pine command our attention when they’re on screen. Of the remaining supporting cast, Timothy Simons stands out as the ultra-creepy Dr. Collins. Gemma Chan has her signature scene later on as Frank’s wife Shelley. Pugh’s performance --- her character is clearly the focal point --- is a powerful one.

The script by Carey Van Dyke and his younger brother Shane --- they are grandsons of that other Van Dyke, Dick --- along with Katie Silberman, is proposing that symmetry is a good thing, exemplified by the (too) many shots of Busby Berkeley-type dancers performing for overhead cameras with kaleidoscope precision. While we know that something is amiss in the community of Victory, even before Alice’s rant at her own dinner party, DON’T WORRY DARLING lacks the suspense of earlier films like it.

However, Alice sees what others think are hallucinatory visions like a plane falling from the sky, the wall of her home crushing her face into a sliding glass door and eggs that are completely hollow. Ergo, we are reasonably intrigued to see where things are headed with (a) her marriage to Jack, and (b) Jack’s relationship with his boss, Frank.

Maybe the biggest problem with DON’T WORRY DARLING is the lack of a cohesive conclusion. Personally, I can accept endings that don’t tie everything up neatly, but in this case, the writers left too many questions unanswered. 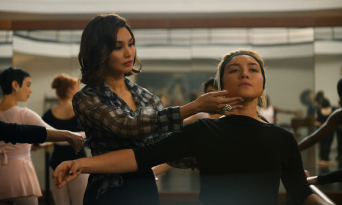