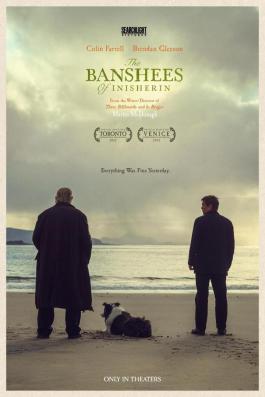 Movie:  THE BANSHEES OF INISHERIN 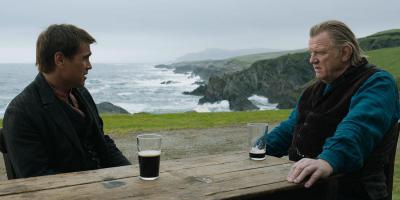 Jeanne: THE BANSHEES OF INISHERIN is a lyrical, contemplative film, certainly not for the likes of everyone. Colin Farrell plays Pádraic Súilleabháin, a simple man whose best friend, Colm Doherty (Brendan Gleeson), has just informed him that he no longer likes him --- and wishes to never speak to him again.

Colm has warned Pádraic that every time he speaks to him --- from this moment forward --- he will cut off one of his own fingers. This statement holds a great deal of consequences for Colm because he plays the fiddle. At first Pádraic is so shocked by this sudden turn of events --- just yesterday he and Colm were best friends --- that he doesn’t believe Colm.

He tries desperately to reason with Colm --- to find out what he did wrong. Pádraic’s loving sister, Siobhan (Kerry Condon), with whom he lives, steps in to learn what Pádraic could have done wrong. Inisherin is a small island off the west coast of Ireland with few inhabitants. Everyone knows everyone else’s business, but it is a known fact that Pádraic is “one of the nice ones”.

But Colm is steadfast in his decision. He finds Pádraic dull, and no longer wishes to spend any time at all listening to him go on and on about the mundane things in his life. Colm wants to compose music and enjoy his solitude with his sweet dog.

Pádraic just cannot let this go --- understandably. Since it’s a small island, they both frequent the same pub. And the same church --- and the same lane going to and from. After an unfortunate confrontation between Colm and Pádraic, he and Siobhan hear a thud at their front door. It is the first finger.

From there things escalate until everyone’s life is irrevocably changed, including Colm, Pádraic, Siobhan and Dominic Kearney (Barry Keoghan), the dim son of the local constable. Mrs. McCormick (Sheila Flitton), the village naysayer, has cautioned them that this will not end well, but no one pays her any attention. 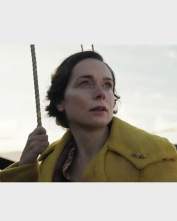 Writer/director Martin McDonagh has fashioned a dark comedy/drama that the discerning moviegoer will find most intriguing --- and funny. Farrell’s Pádraic is, at the beginning, completely empathetic. This poor, sweet middle-aged man lives with his sister in 1923 Ireland during the Irish Civil War, and adores his animals, especially his darling miniature donkey. Now he has suddenly lost his best friend.

It's shocking and soul-crushing for Pádraic. He --- and many on the island --- can’t understand how or why this could happen. And Farrell is masterful in his portrayal of this terrified --- and supremely unhappy --- man. But when the welfare of his beloved donkey is threatened, an entire new side of Pádraic is unveiled --- and Farrell’s performance is brilliant.

Farrell won the Volpi Cup for Best Actor at the 79th Venice International Film Festival in September and it’s abundantly clear why he was awarded after viewing his outstanding work. His anguish, frustration and overt loneliness as Pádraic is so raw and emotional with Farrell never letting up in his portrayal for a moment. The repercussions for Pádraic are heartbreaking.

And Gleeson, of course, is the perfect antagonist. Colm is so determined in his resolve to end this friendship that it’s almost hard to believe. Everyone involved keeps hoping that this mostly gentle man will come around and see the error in his decision. But that will not happen, and Gleeson plays Colm’s stoicism with aplomb.

These two actors were so terrific together in IN BRUGES (2008) that there has been much clamor for them to do another film. McDonagh, who is also responsible for IN BRUGES, has penned another compelling and often hilarious script for THE BANSHEES OF INISHERIN, for which he won the award for Best Screenplay at Venice.

And though Farrell and Gleeson are both stellar, Condon is just as phenomenal playing Pádraic’s lovely sister looking for something bigger and better in her life. She brings just enough spark to her brother’s dreary existence, all while dreading her own tedious life. Condon is totally delightful, especially in her interactions with Keoghan, whose character is totally smitten with her.

McDonagh clearly has a knack for exceptional filmmaking, including the stunning cinematography by Ben Davis. The location is gorgeous, no doubt, and Davis’ camera work catches all the beauty in breathtaking vistas. And lastly, the soundtrack by Carter Burwell is exquisite, making THE BANSHEES OF INISHERIN one of the best films of the year. 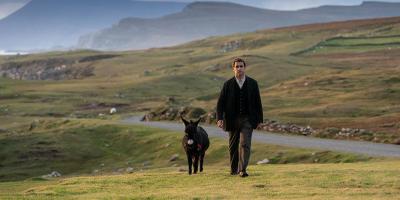 David:  British director Martin  McDonagh is known for his unusual films and for the fact that he writes his own screenplays. The Oscar winner also works routinely with the same actors, including Woodie Harrelson, Sam Rockwell, Brendan Gleeson and Colin Farrell. As for Gleeson and Farrell, they appear together again --- after delighting audiences in IN BRUGES (2008) --- in McDonagh’s latest effort called THE BANSHEES OF INISHERIN.

The title refers to female spirits of Irish folklore who shriek before a death in the family. Inisherin is a fictional island off the west coast of Ireland. The year is 1923 and the Irish Civil War is raging in the distance.

The film is as black a comedy as it gets. For reasons known only to him, Colm Doherty (Gleeson) decides he no longer wants to be friends with Pádraic Súilleabháin (Farrell). In fact, when he tells Pádraic he doesn’t like him anymore, Pádraic responds with an incredulous “but you liked me yesterday”. Cue the laughs, and there are plenty here.

Before Colm’s stark revelation, the two would meet daily at the local pub to talk about whatever best friends talk about. Try as he might, after Colm informs him of his decision, Pádraic visits the pub to perhaps talk sense into his former friend, or at least get a better explanation. 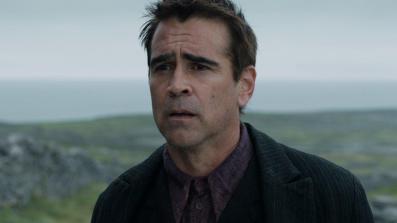 Then McDonagh’s script gets bizarre. Colm announces --- to prove to Pádraic how serious he is --- that he will cut off a finger every time Padraic attempts to speak to him. It’s absurdity at the highest level, but Colm is absurdly serious.

Both Farrell and Gleeson are beyond superb in THE BANSHEES OF INISHERIN. They deliver McDonagh’s words with complete sincerity, and although the film can be difficult to watch, its unique premise will have moviegoers riveted.

The pair are ably assisted by Kerry Condon who plays Pádraic’s sister, Siobhan. She and Pádraic share a small home and she is incredulous that this is happening to the long-standing friendship between Colm and her brother. Condon is a delight whenever she appears on screen.

Supporting roles of note include Barry Keoghan as Dominic, a strange lad whose father is the local constable, and David Pearse in a hilarious deadpan turn as the priest of Inisherin. Pádraic also owns a sweet donkey that comes into play later in the film, but not in a good way. At this juncture Jeanne uttered quiet sighs of “ooooh” because she loves donkeys and wants one of her own.

Jeanne loves to talk about chemistry between actors and it doesn’t get any better than what we’ve seen before and now with Farrell and Gleeson. Farrell has already been rewarded at this year’s Venice International Film Festival for his Best Actor portrayal of Pádraic and McDonagh copped the award for Best Screenplay. 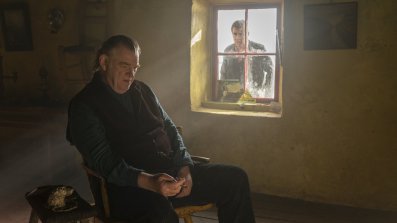