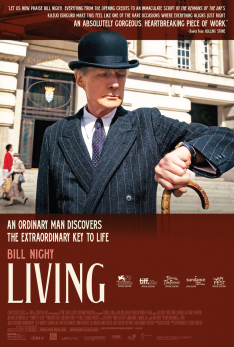 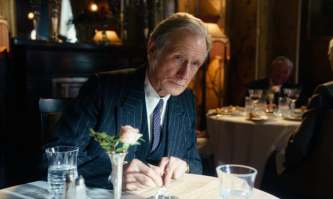 Jeanne: Profoundly affecting, LIVING, a film directed by Oliver Hermanus with a heart-rending screenplay by the venerable author Kazuo Ishiguro, is the perfect example of a small slice-of-life story which simply cannot be forgotten. Based on Akira Kurosawa’s film IKIRU (1952) and starring the always divine Bill Nighy, it’s a movie-going experience unlike any other in 2022.

In 1953 London, people are still recovering from the drama of World War II. Some, like Williams (Nighy), a long-time civil servant, bury themselves --- and their feelings --- in their work. Life has become nothing more than getting up, taking the train and going to work, only to do it all over again day after day.

It takes a life-altering diagnosis to snap Williams out of his mundane existence and to remind him that there is more to life than overseeing desk jockeys and dealing with stacks of paperwork at County Hall. With the help of a former employee, a lively young woman named Miss Harris --- or Margaret (Aimee Lou Wood), Williams begins the slow process of “living” again.

Ishiguro’s script is sublime and elegant. Though David may point out that the movie begins a tad slowly, I must disagree. I was hooked from the first frame. Williams is a lonely man --- painfully lonely. So, when he first learns his fate, he flees to a seaside resort where he meets a free-wheeling playwright, Sutherland (Tom Burke), who takes Williams to all his favorite haunts for a night of debauchery.

At one point during the evening’s festivities, he finds himself receiving a tutorial from Sutherland on how to negotiate the claw crane in an arcade. Though he’s unlucky then, later, when he’s out with Margaret, Williams convinces her to try --- and she manages to snag the same white, fluffy bunny he was after. It’s just a little moment, but in Ishiguro’s hands, it becomes significantly poignant. And, after all --- it is all about the writing.

The part of Williams was written with Nighy in mind, and seriously, no one could have performed it as well. He’s had such an illustrious career and Williams is certainly his crowning jewel --- Nighy is superb. His quiet refinement speaks volumes, particularly in a scene with Wood in a pub where he must deliver a rather emotional monologue. It makes me weep just writing about it. And Wood was equally moved while they were filming.

She and Alex Sharp, who plays Peter, another of Williams’ employees --- the newest addition to his team --- are both delightful and charming, providing a bit of a love story, which Ishiguro added to the original Kurosawa-Hashimoto-Oguni screenplay. And Sharp is also responsible for one of the most memorable scenes in LIVING, which comes at the very end. He and Thomas Coombes, who plays a police constable, have a touching conversation regarding Williams’ legacy. For such a little film --- and not very lengthy --- LIVING provides some of the most indelible movie moments of 2022.

Lest you think LIVING is all sad and gloomy --- it most definitely is not. Williams experiences some very happy occasions with Margaret, and his final project has given his life new purpose. It’s a stunning transformation and Nighy performs it to its fullest.

I would be remiss if I failed to mention the remarkable set designs by Helen Scott, the impressive costumes by three-time Oscar winner Sandy Powell, fabulous hair and makeup by Nadia Stacey and gorgeous score by Emilie Levienaise-Farrouch. Period films are never easy, but these consummate professionals make it look effortless. 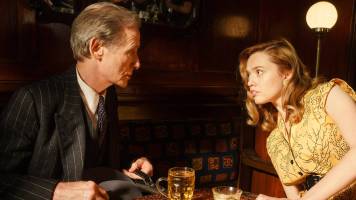 David:  I would describe this wonderful small film as a gem to be treasured. In reality, though, it sends a gigantic message about human mortality and how we might respond to our fragile existence.

LIVING is anchored by a performance from Bill Nighy that is subdued, yet eloquent --- and elegant in its brilliance. Mr. Williams (Nighy) is a staid civil servant working in a London office that bears some responsibility for the rebuilding of post-World War II London. He is prim and proper, dutiful to his job. But his existence has little substance since the death of his wife many years earlier, and we learn he has virtually no relationship with his son, Michael (Barney Fishwick).

Williams is told by a doctor he has only six months to live, nine at the outmost, due to cancer. But does he feel sorry for himself? In his position he can and does exert his influence for a special project a small group of women are clamoring to complete. They want an abandoned city plot to be converted into a children’s playground.

This is certainly not a high priority for the powers that be, but Williams makes it one. He realizes that his life to this point has been largely uneventful and is determined to do something good for the community.

After meeting a free spirit named Sutherland (Tom Burke), they bar hop and end up in a strip club --- quite a departure for the stoic man with his blue pin-striped suit and derby. The period is 1953 and virtually all the men wear hats. But this debauched behavior is short lived.

Williams decides to befriend one of his employees who is leaving the office for another job. She is the pretty and much younger Miss Margaret Harris (a terrific performance by Aimee Lou Wood). Their scenes together are emotionally charged as he confides to her the truth of his condition. She is initially concerned that he is infatuated with her youth and attractiveness, but ultimately, she is sensitive to his plight. Their primary scene together in a pub was shot 19 times at the behest of director Oliver Hermanus.

LIVING is based on the 1952 film IKIRU directed by Akira Kurosawa who also co-wrote the screenplay. Nobel Prize-winning author Kazuo Ishiguro (“The Remains of the Day” and “Never Let Me Go”) penned the screenplay for this version. Although LIVING is the kind of film Jeanne and I prefer it is surely not for everyone. The movie gets off to a sluggish start, but quickly gets our attention. Older moviegoers, especially, who may have considered their own mortality, will relate to Williams forced to evaluate his life.

Peter Wakeling (Alex Sharp) is a new employee in the office who opines that Williams used his terminal diagnosis to “galvanize” his intention to get the children’s playground completed. Such an astute observation delivered by the youngest ever Tony-award winning Best Actor for his role in “The Curious Incident of the Dog in the Night-Time” on Broadway.

One particularly moving scene has Peter, as he looks over the finished playground one evening, speaking to a police constable (Thomas Coombes). The officer recalls the evening he witnessed Williams sitting on a swing as snow fell. The officer reflects how at peace Williams seemed and did not want to disturb him.

Ironically Nighy’s time on screen is limited because of the unique way the filmmakers handle his death and funeral. Rather than spell that out here, the advice is to see this movie --- all 102 minutes of it ---and revel in its powerful simplicity.

Jeanne and I frequently speculate about potential Academy Award nominees. If Bill Nighy should make the short list, it could possibly be the most understated portrayal to ever receive a Best Actor nomination. And it would be well deserved in what is surely one of the best movies of the year. 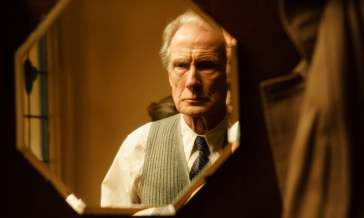