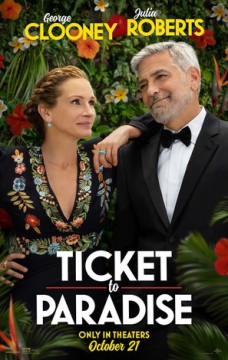 Jeanne: If nothing else, TICKET TO PARADISE is worth seeing for the SPECTACULAR locations. Shot mostly in Australia, specifically around the Whitsunday Islands off the coast of Queensland --- as Tina Fey would say “I want to go to there!”.  And let’s face it, the two mega stars, Julia Roberts and George Clooney, aren’t too bad to look at either.

TICKET TO PARADISE is a silly movie with many flaws, but in the end, most moviegoers won’t care. Roberts and Clooney reunite to play parents, Georgia and David, to Lily (Kaitlyn Dever) who has just graduated from law school at Northwestern University. To unwind, Lily and her best friend, Wren (Billie Lourd), take off for Bali, where Lily immediately falls for Gede (Maxime Bouttier), a local seaweed farmer.

Realizing she has never really wanted to practice law, Lily makes Bali her home with Gede and they plan to marry. Of course, Georgia and David are aghast --- and even though they loathe the sight of one another --- they travel together to Bali for the wedding with the intention of stopping it. What could possibly go wrong?

TICKET TO PARADISE doesn’t really produce as many laugh-out-loud moments as one would hope, but there are a few. When Georgia asks David if he still snores --- their fabulous rooms at the resort are right next door --- David asks Georgia if she knows of anyone who snores less as they age. And for those of us of a certain age --- David, my partner --- that’s pretty hilarious.

Roberts and Clooney are totally delightful, despite some rather stupid dialogue at times. But, as the professionals they are, they make the most of it --- and look like they’re having the time of their lives. They are adorable together. Plus, you’ve got unbelievable locations --- what more do you need? Per usual, David doesn’t like TICKET TO PARADISE, but seriously, what does he know? 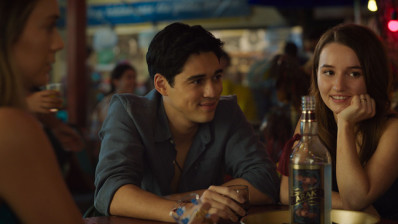 David:  Even with two of the most popular movie stars on the planet I wasn’t expecting much from TICKET TO PARADISE. That’s a good thing because the film is way below par. The obvious conclusion --- despite George Clooney and Julia Roberts as leads --- it’s the writing that isn’t up to snuff. Are you reading, Jeanne?

Divorced husband and wife David and Georgia join forces to prevent their daughter Lily (Kaitlyn Dever) from rushing into marriage with a young man, Gede (Maxime Bouttier) she just met. Besides sparing Lily from making the “same mistake” they made, they don’t want her to throw away her future as an attorney. Never mind that she just graduated from college and there is no conversation about the bar exam --- she claims to have a job already lined up at a law firm. Also later, she talks about just completing four years of college. Isn’t law school only three years? Picky perhaps, but this is evidence of shoddy script writing.

The film starts with David and Georgia on alternating screens throwing barbs at each other to sympathetic friends. This section of TICKET TO PARADISE is pretty well edited --- we certainly get the message they don’t like each other. 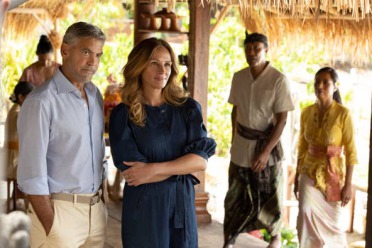 Of course, enroute to Bali where Lily and Gede are planning a wedding which David and Georgia want to sabotage, they somehow end up with seats right next to each other on the plane. What’s worse is that Georgia’s new flame, Paul (Lucas Bravo), is a pilot on the flight, and the pair have a long and embarrassing kissing scene before the plane takes off. Bravo is actually a good actor based on his work in “Emily in Paris” and “Mrs. Harris Goes to Paris”. But here his job is to look like a goofball.

Bouttier is quite good in the role of seaweed farmer/groom. Dever does a decent job, as well, as does her best friend, Wren (Billie Lourd), who accompanied her to Bali. I only snickered once during this film and it came when Wren, carrying drinks for Lily, Gede and herself, ends up drinking through straws from all three glasses after the other two disappear.

During the wedding party on the island, Georgia and David get totally smashed and join the dance floor in what could have been a funny sequence. Instead, they are completely over the top although the actors claim they had a good time filming it.

I shall not rehash any more of the unfunny scenes in TICKET TO PARADISE.  I will say, though, that the Bali wedding traditions shown in the movie are informative and interesting. 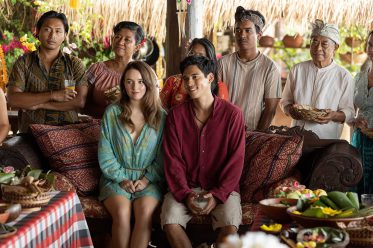