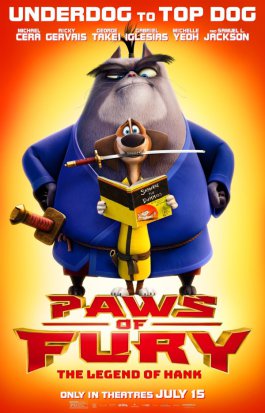 Jeanne: Hank (voiced by Michael Cera) is a dog. But all he wants in life is to become a samurai. PAWS OF FURY: THE LEGEND OF HANK is the story of one lonely underdog who manages to do the impossible.

The tail --- er, tale --- begins as Hank is facing a firing squad courtesy of the evil cat, Ika Chu (voiced by Ricky Gervais). Interrupted by the ruling Shogun (voiced by Mel Brooks), who demands he send a replacement samurai to the small town of Kakamucho, Ika Chu sends Hank knowing full well that the cat village hates dogs.

Barely surviving his inhospitable greeting, Hank stumbles upon Jimbo (voiced by Samuel L. Jackson), a washed up, overweight cat who was once the greatest samurai of all. After a great deal of haranguing, Hank convinces Jimbo to teach him how to be a master samurai. Jimbo is not at all thrilled at the prospect, but finally relents. 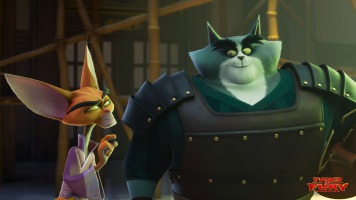 PAWS OF FURY: THE LEGEND OF HANK provides a few hair-raising battles and a whole host of crazy characters, including Ohga, Ika Chu’s mighty, but not so bright cat warrior (voiced by George Takei), Sumo (voiced by Djimon Hounsou), little Emiko (voiced by Kylie Kuioka) and her beautiful feline mother, Yuki (voiced by Michelle Yeoh). While Ika Chu is trying to destroy Kakamucho because it spoils his view, his palace is a testament to his bad taste, focusing on a gigantic jade toilet, which of course, inspires a plethora of bathroom humor jokes.

Not to worry, PAWS OF FURY: THE LEGEND OF HANK is actually very funny. The kids will love the enjoyable cast of cats --- and Hank --- while there is plenty of amusement for the adults. And at 85 minutes --- which is a running gag in the film --- it doesn’t overstay its welcome.

The best part of PAWS OF FURY: THE LEGEND OF HANK has to be the few valuable lessons. Teaching children about tolerance, acceptance, hard work and love, all while being entertained, is always a good thing. 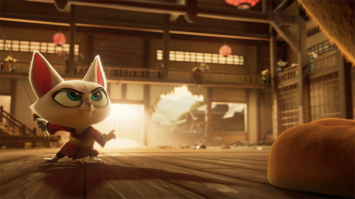 David:  PAWS OF FURY: THE LEGEND OF HANK is an animated film that boasts an all-star cast, including Samuel L. Jackson who voices Jimbo, a fat cat who used to be the best samurai in the land. Michael Cera lends his voice as the title character, Hank, a hound in search of meaning in his life. Mel Brooks --- yes, he’s still making us laugh at 96 --- plays the Shogun and he appears as sharp as ever.

This is an animated movie that adults may find more entertaining than the kids because many of the jokes will go over the little ones’ heads. For example, Brooks as the Shogun, at one point exclaims “It’s good to be the Shogun!”. Anyone who remembers his classic film “HISTORY OF THE WORLD, PART I” will recall the same line but with “king” instead of “shogun”, a comment that has morphed into the American vernacular. 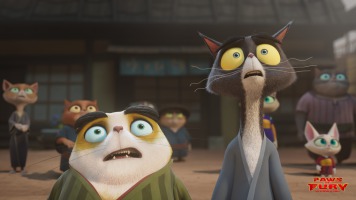 Jackson and Cera have a natural chemistry. Jimbo and Hank come to an understanding after Hank flubs his first real samurai assignment. But in the end, the cat and dog come to tolerate each other --- and even become friends.

The animation is occasionally brilliant, especially when Ika Chu’s humongous jade toilet bowl overflows creating a river in the village of Kakamucho. PAWS OF FURY: THE LEGEND OF HANK runs a brisk 85 minutes --- without the credits, as is explained by one of the characters --- and is worth a look.