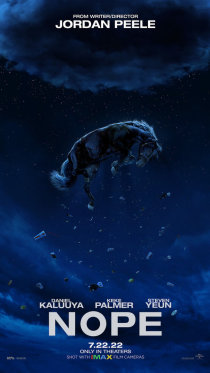 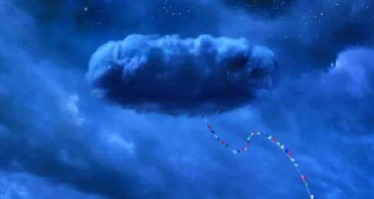 Jeanne: I must admit I’m shocked. I no longer truly enjoy scary movies, but Jordan Peele has been exemplary thus far in his efforts to frighten the bejesus out of his fans, me included. So, it is with a heavy heart that truth be told, NOPE just isn’t that terrifying --- or great.

There are a couple of stories going on in NOPE. First, siblings OJ Haywood (Daniel Kaluuya) and Emerald “Em” Haywood (Keke Palmer) are running the family ranch after their father is killed by objects falling out of the sky while sitting on his majestic steed, Ghost.

The other involves Ricky “Jupe” Park (Steven Yeun), who was once a child star on a sitcom filmed in front of a live audience. A chimpanzee who was featured in the show went ballistic during a filming after a balloon popped. He killed just about everyone on the set except Ricky. Now he and his wife run a kind of western amusement park near the Haywood ranch --- utilizing some of their trained horses.

Six months after their father’s death, OJ and Em begin experiencing some strange happenings on their vast property. A rather large spaceship seems to be watching their every move. In an effort to capture the UFO on video, they enlist a local techy, Angel Torres (Brandon Perea) to install surveillance cameras, and a documentarian, Antlers Holst (Michael Wincott), to film it.

While there are some incredibly tense moments, NOPE doesn’t pack the wallop of Peele’s first two films. Even the scene depicting the chimp terrorizing the cast of the TV show fails to deliver any real horror. The bludgeoning is done off camera, which is fine with me, but it minimizes the effect.

And how these two different families are connected, other than through the horses, is not abundantly clear, except now they all have a foreign object in the sky after them. Perhaps NOPE would make more sense if Peele had concentrated on one aspect of his story or the other, but as it stands, Kaluuya’s character is completely underutilized.

Palmer’s Em is initially very irritating, but once she and Angel settle into their roles as voyeurs, things intensify. I just found myself worrying more about the horses than the humans.

Hoyte van Hoytema’s stunning cinematography adds another dimension to this out-of-this-world screenplay by Peele. And the music by Michael Abels is formidable, with some distinctive song selections.

NOPE isn’t a bad movie --- it’s simply not a memorable one. The script is not particularly clever and almost devoid of humor, except when OJ mutters the word “nope” when considering abandoning his truck.

And, once again, at 135 minutes, it’s just too long. It’s a common mistake anymore with summer blockbusters. Longer movies are not synonymous with better movies. 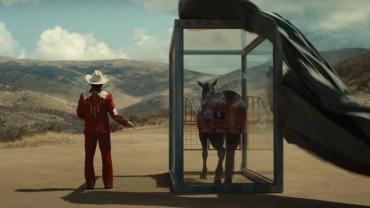 David:  Effective horror movies will figuratively have you on the edge of your seat. At our screening of Jordan Peele’s latest scare fest, NOPE, one patron actually did sit on the edge of his seat, partially blocking Jeanne’s view --- she was not happy.

Despite some incredible special effects, the most alarming music this side of PSYCHO and a concept from the depths of Peele’s brilliant imagination, Jeanne did not resort to hiding her face at any time. But not to worry horror fans. NOPE has enough jarring moments and intrigue to satisfy even the most jaded of sci-fi fans. You may never consider UFOs in the same way again. And you will definitely not look at inflatable tube men --- the ones that draw attention to businesses --- the same way, either.

Strong performances from the main cast include Daniel Kaluuya as OJ --- he’s back with Peele after his leading role in the smash 2017 Peele debut GET OUT. Keke Palmer as OJ’s sister Emerald, Brandon Perea as electronic techy Angel, and Steven Yeun as Jupe, proprietor of a California amusement park of sorts, also dominate the movie. Michael Wincott makes a late appearance as an expert documentarian who promises to get the alien presence on film. The absolute last shot of Peele’s movie is the epitome of irony. It’s masterful.

NOPE is a bit long at 135 minutes, but I was never bored. The scene at the amusement park with 40 spectators is as jaw-dropping as it gets. There are other chilling sequences, as well. See it in IMAX!

And let me again point out the astonishing music by Michael Abels, his third collaboration with Peele. If NOPE is not recognized somewhere for its use of music and sound effects in general --- I will be genuinely shocked. 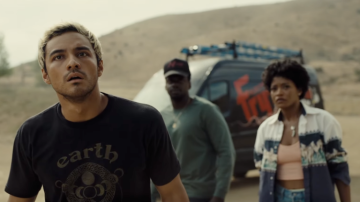