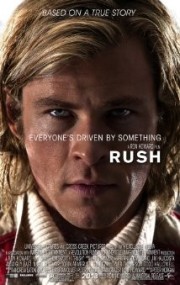 The competitive spirit can be a dangerous thing, as evidenced by Ron Howard's latest biopic of two Formula 1 racers, James Hunt and Niki Lauda, whose 1970's rivalry was a thing of legends. Directed by Howard and written by Peter Morgan, with whom Howard collaborated on "Frost/Nixon", "Rush" is as exhilarating as one would expect Grand Prix racing to be.

Hunt (Chris Hemsworth) is a dashing, incredibly handsome English playboy, known for his womanizing. Lauda (Daniel Brühl), on the other hand, is a dedicated, disciplined disciple of the sport, quick to correct others that he is Austrian, not German. Hunt, who is backed by a wealthy countryman, has been driving the lesser circuits for a few years. His parents wanted him to be a doctor or lawyer, but he is drawn to the danger associated with racing, and can imagine no other way to live.

Lauda's father has the same mindset --- he expects Niki to follow in his shoes --- a successful banker. But Niki defies him, taking his part of the family fortune and buying his way into Formula 1. He rebuilds a Ferrari to go even faster, setting out immediately to become a champion.

"Rush" is replete with magnificent and exciting car racing scenes. Brühl as Lauda narrates the film in terms of the fierce rivalry. Hunt and Lauda were as competitive as any other athletes in any other sport, except no others are as potentially deadly.

Olivia Wilde and Alexandra Maria Lara star as the love interests of Hunt and Lauda. Both are gorgeous and fine actresses, which adds some interest to the story. But the real focus is this harrowing world of Grand Prix racing and the hold it has over its participants. It's a sexy, hedonistic way of life, and Howard and his cinematographer Anthony Dod Mantle do a marvelous job of showcasing this fast and furious sport.

It's okay, ladies --- I get it.  Even if you're not into auto racing, Chris Hemsworth is worth the price of admission. He's handsome, rich and (sorry) very married, the father of an infant daughter. He's also a pretty good actor, following up his Thor persona with a fine performance as British race car driver James Hunt in Ron Howard's exciting new film, "Rush".

The movie chronicles the well-publicized feud between Hunt and Austrian driver Niki Lauda in the 1970's, and culminates in the 1976 Formula One race in which the pair competed for the World Championship Grand Prix, the final leg taking place in Japan. If you're not a fan of Formula One or any other form of auto tracing --- as I am not --- it doesn't matter. Howard's movie is tense, thrilling and funny, and extremely well acted.

Lauda is played by Spanish actor Daniel Brühl ("Inglourious Basterds"), and he and Hemsworth are electric on screen. We believe they are actual race car drivers and that they don't like each other, but we also believe they have a grudging respect for one another. Hunt is a high-living, hard drinking womanizer (the real James Hunt is said to have slept with 5000 women), while Lauda is a straight-faced, serious, married man

--- the two couldn't be further apart in personality types.

"Rush", besides the presence of director Howard, gets its pedigree from screenwriter Peter Morgan. His resume includes great films like "The Last King of Scotland", "The Queen", "Frost/Nixon" and "The Damned United". In the hands of a lesser scribe, "Rush" might have been merely a mishmash of race scenes intertwined with a couple of drivers sneering at each other. But Howard made sure that Morgan's story maintained its integrity. Want more proof? The real Niki Lauda, himself, approved of the film's final cut.

The real James Hunt, however, died prematurely of a heart attack in 1993. He was only 45.