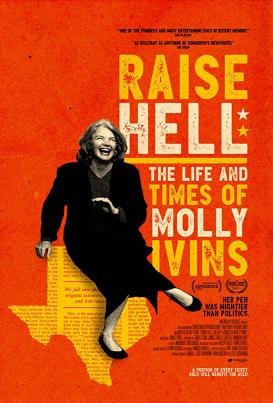 Watching Janice Engel’s documentary RAISE HELL: THE LIFE AND TIMES OF MOLLY IVINS made me so nostalgic, I truly wanted to weep --- though mostly I was laughing too hard. Journalist Molly Ivins was many things --- brilliant, caustic, argumentative, feisty --- and hilarious. David and I were devoted fans, never missing her syndicated column until she passed away in 2007. And, to this day, I still miss her!

Ivins was what my mother would have called “a pistol”. She was born into a well-to-do family --- the “smart one”, according to her mother. Her sister was the “pretty one”, so Molly thought she was ugly, and her sister thought she was stupid. The things we do to our children --- but I digress.

Molly’s father, Jim, was a wealthy oil executive and he definitely didn’t care for Molly’s world views. She went off to Smith College attempting to escape, and after getting her master’s degree in journalism from Columbia University, she began her career at the Minneapolis Tribune. From there she moved on to the Houston Chronicle and others.

She covered the Texas legislature for the Texas Observer and didn’t suffer fools when it came to the “good ol’ boy” politics of Texas --- or anywhere else, for that matter. But it wasn’t just Republicans who felt her wrath. Occasionally she’d go after Democrats, too. Ann Richards, the one-term Democratic governor of Texas, was a good friend. Richards, herself, took no prisoners, known for her disdain of George W. Bush.

After a brief stint at The New York Times, where, though they admired her ferocity, they tried to rein her in, she was offered a job at the Dallas Times Herald, which boasted “complete freedom” for her. Her column was eventually syndicated in nearly 400 newspapers, which launched a new career of lecturing. She was in high demand because of her blatant, often pithy, no-nonsense assessments --- and, of course, her outrageous humor.

I also became sad watching RAISE HELL: THE LIFE AND TIMES OF MOLLY IVINS, not only because I wish she were still writing --- think of how she could be skewering the current occupant of the White House --- but because people of this generation don’t know her, and how absolutely fabulous she was.

Molly Ivins’ writing career included stints in Texas, Minnesota, New York and back to Texas, but at her peak, the two-time Pulitzer nominee was syndicated in almost 400 newspapers in the U.S. She was an equal opportunity critic of politicians, although her usual targets, especially George W. “Dubya” Bush, were on the right.

If you wonder who Molly Ivins was, she deserves your attention in this new documentary, directed by Janice Engel and inspired by a stage play, entitled RAISE HELL: THE LIFE AND TIMES OF MOLLY IVINS. Jeanne and I were avid readers of her column when it appeared in the Chicago Tribune. She published a compilation of her columns in a book entitled “Molly Ivins Can’t Say That, Can She?” that spent 29 weeks on The New York Times bestseller list.

When Molly was no longer welcome at some of her newspapers, the Dallas Times Herald offered her a position where she was free to write anything she wanted, and it would be published. This attitude is juxtaposed with the powers at the Houston Chronicle, whose editor was a huge supporter of George H.W. Bush, so no criticism of him or his son would be tolerated.

RAISE HELL: THE LIFE AND TIMES OF MOLLY IVINS is full of interviews with friends, family and colleagues. She is seen as a guest with David Letterman and at college campuses like Berkeley and UC Davis. The movie is a penetrating look at Molly Ivins, the journalist, and has fascinating coverage of her as a young girl growing up in Texas.

The best line of the film, uttered by Molly of course, came at the expense of the ultra-conservative Pat Buchanan, who sought the Republican presidential nomination in 1992, the year Bill Clinton was first elected. Buchanan railed against liberals, abortion, gay rights and other subjects, to which Ivins joked that the speech “probably sounded better in the original German”.

It is so difficult to watch this documentary about Ivins without constantly wishing she were still alive to pontificate on the current political atmosphere. Jeanne and I commiserate in the same way about one of Molly’s contemporaries who wrote for the Chicago Tribune, the inimitable Mike Royko. What a field day this pair would have today!

Before she died in 2007 of cancer, Molly remarked that politicians are deathly afraid of the people. She remarked that when Americans get stirred up and protest, change happens. And finally, Molly said that “politics will either make you laugh, cry or vomit…”. She was only 62 when she passed away --- her voice is sorely missed.